It almost never fails that a filmmaker who thinks he’s King of the World will produce at least one box office disaster (if not two) in an otherwise hugely profitable, and sometimes critically distinguished career. Sometimes, said films are of the “movie I really want to make” variety, the kind of “little” picture that the studio gives the director a mulligan on so they’ll do the blockbuster sequel they really wanted in the first place. But even when that personal movie is packed with enough spectacle and explosive hubris to make it anything but an art film, there can still be something deeply felt to be found in the excess. This can result in the kind of out-of-control pictures that can become the stuff of legend, a la HEAVEN’S GATE. Or their memory can be banished to the province of die-hard cultists, especially when the movie’s director barely seems to acknowledge a love child he’s since shoved in the closet, avoiding mention of the mutant aberration it became.

While I can’t pretend to know what Steven Spielberg thinks of 1979’s 1941 these days, I do know that most of the packed audience at the not-so Silent Movie Theater (where it was recently screened for La La Land Records’ CD release celebration) were roaring with laughter- their senses bombarded by the sound effects, insane spectacle and John Williams’ wonderfully bombastic music. As the evening’s moderator (and 1941 album producer) Michael Mattesino so nicely put it, the whole movie feels like the excess of a ten year-old running amuck in a Hollywood sandbox, one that would’ve put just about any elaborate sand castle in his desired path after the hits of JAWS and CLOSE ENCOUNTERS. While they’d have to wait for RAIDERS OF THE LOST ARK for another one, that doesn’t mean 1941 isn’t jam-packed with Spielberg’s trademarked virtues, as well as arguably having the most star-studded cast and joyous physical destruction outside of Stanley Kramer’s IT’S A MAD MAD MAD MAD WORLD.

Where Kramer’s favored composer Ernest Gold could take a far more light-hearted approach to play what was essentially a harmless treasure hunt, 1941 was rooted in the oncoming monster of WW2. That was no laughing matter when “war nerves” caused the film’s basis in 1942’s “Battle of Los Angeles,” wherein our gun batteries blasted empty skies to shoot down non-existent enemy planes. Sure there have been plenty of WW2 comedies (even during WW2), but it was 1941 that somehow found hilarity in a nation’s oncoming pride, and unspoken dread, at the bloodshed to come. Then there was Spielberg actually handing “victory” to the Japanese, something that would have been unthinkable for even Abbott and Costello’s BUCK PRIVATES back then. Yet it’s this kind of patriotic seriousness, as born out of panic, that John Williams runs with for what’s still likely the most magnificently over-the-top score of his career. It’s a soundtrack that plays like a soupcon of Williams’ greatest musical hits for Spielberg, albeit for one of the biggest financial disasters of the director’s career. But that does nothing to diminish the huge, overall enjoyment of 1941, especially in hearing Williams take his symphonic finesse, and then throw it into a bugnuts blender with Carl Stalling cartoon music, John Phillip Sousa anthems and Glenn Miller—ish big band stylings, all of which are finally served up with all of its bells, whistles and artillery blasts by La La Land’s long-awaited two-CD release.

The first 77-minute disc barely contains the complete original score, its orchestral onslaught beginning with a “Main Title” of patriotic brass, and dangerous military percussion, rising up with alarm for the war to come. And you might think this was some proto SAVING PRIVATE RYAN score before the film’s JAWS spoof open of “Chrissie Takes Another Swim” (its same nudist also briefly tracked with that score), the cue’s brooding suspense and sharp drill to action segueing to the glory of one sailor’s glimpse at a Gaijin’s moon, one packed with all the musical wonder that Roy Neary beheld his first spaceship with. But it’s with the entrance of “Wild Bill Kelso” that Williams truly lets us know this is a score for a rollicking comedy, with a march that still stands as the Americana composer’s most gloriously nationalistic- it’s can-do brightness the height of irony for John Belushi’s growlingly inept fighter pilot. As always, great themes suffuse Williams’ work, with a secretary’s plane nymphonia heard with the heavenly strings of “Donna’s Obsession.” Mock Elgarian solemnity infuses “You Have Been Chosen,” where broader comedic stylings highlight “The Capture of Hollis” and “The Sentries.” The Rising Sun gets its own Oriental exclamations in “Encounters” (with throws in a CE3K quote to boot), where “Ward’s Big Gun” pits the sub’s inept villainy with the desperate rhythms of Ned Beatty’s homeowner training his gun on them, the kind of Axis action that Williams would tune to Teuton next time out for the more menacing fight between Indy and the Nazis.

With a cast of hundreds that jammed together the brightest lights of SNL, Second City and the comedy players of co-writer Robert Zemeckis’ I WANNA HOLD YOUR HAND, Williams’ distinctive character themes are frequently colliding with each other to match 1941’s frantic slapstick, most brilliantly as Donna’s theme engages in a gloriously sweeping dogfight with Kelso’s over the streets of Hollywood Boulevard in “Kelso’s Attack,” wherein Williams also brilliantly incorporates “Deep in the Heart of Texas.” Wild Bill gets a more apropos quote “From the Halls of Montezuma” in “More Kelso,” where the military march of “Sound Off” sends him off in a “Stolen Motorcycle.” It’s all a dynamic sense that the free world, if not Los Angeles, is hanging in the balance of this brilliantly busy score, which is constantly switching action for the screwball mayhem on Bugs Bunny-worthy dime.

Yet there are moments when the any sense of comedy drops out from the score, especially for a goldbricking Zoot Suiter’s heroic theme, which packs truly moving emotion in “Wally Saves Betty.” It’s a rescue from a likely rape by Treat William’s stripe-wearing savage, the one plot thread where 1941 truly threatens to cross the line, capturing both Betty’s tearful victimization and her savior’s sudden rise to manhood. Wally will be the one truly emotional thread character arch that Williams follows, as it has him assume his patriotic worth in “The Tank Approaches” to face off against the screwball bell percussion and strings of the Japanese. In terms of that absurdity, “The Ferris Wheel” ranks as Williams’ goofy highlight, as dastardly military action attacks out-of-control calliope music, the brass gloriously screaming Banzai as Williams send the carnival attraction into the drink.

But if there’s one bit of music that Williams’ heart is the closest to, then it’s in the big band destruction of “Swing Swing Swing.” Drawing on the memory of his dad Johnny, who played drums for the likes or Raymond Scott, Tommy Dorsey and Benny Goodman, Williams spins the latter’s most famous hit “Sing Sing Sing” into his own thrilling number. It’s a bravura big band jive that not only salutes Goodman but manages to become its own swinging animal as the full orchestra simultaneously underscores the escalating USO dance hall riot in what’s arguably the film’s best combo of nostalgia and slapstick. As sailors and navy face off, Williams brings in the Notre Dame-famed Irish song (and QUIET MAN favorite) “The Rakes of Mallow” with “The Brannigan” and “Here We Go,” the fighting rhythm escalating in jig fashion to prefigure his Gallic-influenced brawls for FAR AND AWAY, as well as the more lethal dance hall riot that started TEMPLE OF DOOM. 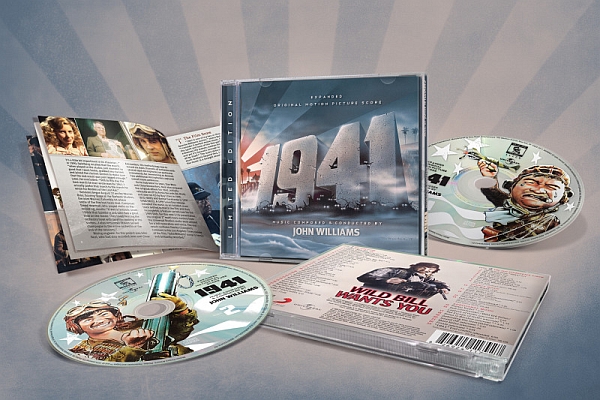 Williams trumpets in the actual WW2 standards in the second disc of 1941 with “In the Mood,” “Down By the Ohio,” and “Goodnight Sweatheart,” as well as getting in a satirically perky rendition of “Jingle Bells” for the film’s Xmas setting. But in the platter that includes numerous alternates, as well as the original LP presentation (complete with cannon blasts over the end title), perhaps the most interesting bit is the “Promo Trailer.” Directed a year before the movie’s actual release by co-scenarist John Milius, this spot had Belushi addressing the audience from his fighter plane with a crazed patriotic plea for God and country. Williams admirably hits every nuance of the Belushi’s warnings with the stream-of-consciousness tones of Axis evil, meaningful glory, and a rousing march, slamming home the score to come.

But then, for a composer well into his feature career after starting as “Johnny” for the slapstick likes of PETULIA and NOT WITH MY WIFE YOU DON’T, 1941 resounds with the glory to continue in his Spielberg collaboration, let alone with a since-unrivalled sound and fury. Every insane powerhouse nuance is captured by this La La Land package, whose terrific-sounding, and looking presentation proves them obvious cigar-gnashing fans of the movie and score if there ever were some. Beyond his entertaining and informative results here, Michael Matessino also continuing to prove his mastery of re-mastering blockbuster scores with this and the likes of SUPERMAN and BACK TO THE FUTURE. For those who remember the film’s awe-inspiring chaos amidst everyone else who didn’t know what the hell to make of it, getting the who kaboodle of 1941, and then some, stands as one of the bigger soundtrack treats of the year- done with enough affection and sonic finesse to perhaps even convince Spielberg that he made something good after all the brickbats that didn’t occur on-screen. As for Williams, hearing him play the 1941 march two seasons ago at the Hollywood Bowl proves he might think more highly of it. And that’s just the tip of his big musical bang that’s finally here in all of its brilliantly controlled chaos.