First conquering the movie world as a titan of animation, Walt Disney then turned his sights in the 1950’s to becoming an equally formidable master of live action, rivaling any Hollywood studio with such family-friendly spectacles as DAVEY CROCKETT, THE SWORD AND THE ROSE and TREASURE ISLAND. It’s a lavish tradition that’s shown no signs of abating for Disney through the decades with the likes of THE ROCKETEER, NATIONAL TREASURE and PRINCE OF PERSIA, effects-filled movies that, more often than not, featured adult heroes. But that didn’t mean you couldn’t sneak a cute seal, or robot aboard the two Disney landmarks that epitomize the company’s flesh and blood grandeur. Both pictures dealt with mad geniuses in awe-inspiring ships setting off to topple impossible forces- be it the world’s war machines, or the primal force of space itself. Perhaps that’s why 1953’s 20,000 LEAGUES UNDER THE SEA and 1979’s THE BLACK HOLE remain two of the studio’s best-loved pictures.

While Disney’s full resources would result in one science fiction effort without peer (and another with no small another of awesome goofiness), these pictures’ scores by Paul J. Smith and John Barry captured the kind of lavish magic and adventure that spoke for the universal appeal of Walt’s dream-making. Now their melodic boldness sings like never before with their spectacular, and much-awaited hardcopy releases on Intrada Records. Together, 20,000 LEAGUES and THE BLACK HOLE just might be the two most eagerly awaited soundtracks to be born from the label’s new relationship with the Mouse House. 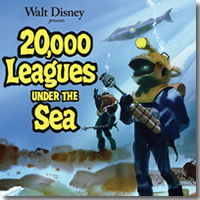 If Walt had a house composer, few occupied more glorious rooms than Paul J. Smith, whose seminal Disney animation scoring credits included SNOW WHITE, a shared Oscar win for PINOCCHIO and co-nominations for THE THREE CABALLEROS and CINDERELLA. While these may have seemed like cartoons on the surface, the action, humor, and emotion that Smith invested in their scores made the pictures as richly palpable as any live-action movie. It was this talent that made Smith particularly invaluable when it came time for Walt’s “real” deals like THE SHAGGY DOG, THE PARENT TRAP and POLLYANA, not to mention any number of Disney nature documentaries. But in terms of its epic quality, no Disney film Smith scored would pack the grandeur for another movie adaptation of Jules Verne most famous story, especially as 20,000 LEAGUES marked its first sound incarnation. Directed by Richard Fleischer (the son of Disney’s animation rival Max), and starring Kirk Douglas, Peter Lorre, James Mason, and the cinema’s most recognizable submarine, the scope, and seriousness (excepting that darned seal) of 20,000 LEAGUES UNDER THE SEA arguably made it Disney’s first true “Hollywood” picture in terms of its maturity and technical innovation.

Even 57 years later, few movie scores have so beautifully conjured the ocean’s depths like 20,000 LEAGUES, with Smith’s lush waves of symphonic melody evoking a lyricism worthy of Debussy’s “La Mer” – as played within the context of a populist adventure spectacle. It’s also one of the most strikingly thematic scores to sail under it, captained by a grand melody for Nemo and his Nautilus. Making a monstrous first appearance in the “Main Title,” this raging, ramming speed melody will shift from the music of dark destruction to something nobler, if no less fearsome. For man and machine are musically one in Smith’s remarkable approach that captures all the emotional turbulence that James Mason brings to one of the screen’s great “mad” geniuses. Yet his actions are understandable, driven from a place of fiery grief that brings a brooding empathy to Nemo, much like such compatriots as Dr. Frankenstein and The Phantom of the Opera (particularly with a pipe organ that furiously blasts out Bach in “Nemo’s Torment”). When Nemo goes out with a bang against “that hated nation” in “Nemo Wounded” and “Finale / Deep is the Mighty Ocean,” Smith’s music laments to the heavens with the sound of a glorious anti-hero’s passing, operatically marking his passage in the best Wagnerian tradition.

While Nemo’s emotional storminess is integral to 20,000 LEAGUES, this is a Disney score after all. And counterpointing Nemo’s melodic tsuris is a playful theme for Kirk Douglas’ brash harpoonist Ned Land, who gets shanghaied aboard the Nautilus. Taken from the slightly salty sea shanty “A Whale of a Tale” (jauntily performed by Douglas himself), this whimsical melody is always on deck for pleasant comic relief in bits like “Street Fight” and “Ned’s Bottles,” while a sojourn “Ashore at New Guinea” gives Smith the chance to indulge in a bit of Bali High before a rollicking orchestra and a shrill surfeit of “Native Drums” chase Ned back to the Nautilus. Yet it’s also a show of Smith’s ability that Ned’s goldbricking theme turns to pure heroism as well. Smith music also makes us feel completely enraptured in the alternately wondrous, and dangerous journey of discovery that Ned takes aboard the Nautilus. And it’s during “Fifty Fathoms / The Island of Crespo” that Smith achieves the score’s purest, Debussy-like transcendence as glistening waves of strings and quizzical announcements of the fish around them convey an atmospheric sense of wonder- the true transference of music into a poetically liquid element.

Whether it’s the glistening strings of a sea walk, the angry brass of a giant squid or a desperately escalating escape from an army that’s just invaded Nemo’s island fortress, 20,000 LEAGUES UNDER THE SEA is pure boy’s adventure stuff, with a mature musical, and cinematic appeal that’s made this score and film an enduring Disney classic on all counts. And one boy who was there to witness the film’s creation is the now-grown composer John Debney (CUTTHROAT ISLAND), whose inspirational appreciation of Smith’s masterwork, and reminiscence of stopping by his own dad’s Disney gig long ago bring this LEAGUES CD even more enthusiasm. Though the soundtrack was previously on iTunes, there’s still nothing better than hardcopy sound and a booklet filled with amazing behind-the-scenes stills. Many of which show Douglas trying his hand at the guitar for the numerous renditions of “Whale of A Tale” that are also included here as bonus tracks- including one sung by The Wellingtons, most famed for their vocals to GILLIGAN’S ISLAND. One can only imagine the possibilities with Bob Denver in the Douglas role. 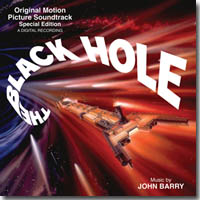 Where Disney turned to Jules Verne for their trailblazing sci-fi magnum opus, THE BLACK HOLE sought to tap into the renewed space craze brought on by George Lucas’ STAR WARS. But instead of battling starships, the big difference here was that laser blasts, rolling meteors and robotic mayhem would mostly occur within the awe-striking confines of one mighty spaceship named the U.S.S. Cygnus. Piloting it far less sympathetically than Captain Nemo (if not without a unhinged commanding presence) is Dr. Hans Reinhardt (played with always-eccentric élan by Maximillian Schell), who gives no end of mad scientist grief to the research vessel unlucky enough to discover his craft and the nearby cosmic anomaly it’s about to enter.

Beyond its nifty effects and production design, the one truly overwhelming presence that sucks everything into its path during the course of THE BLACK HOLE is the towering score by John Barry. Where he’d scored 1978’s far more brazen Italian STAR WARS rip-off STARCRASH, Disney’s BLACK HOLE was a significant step up in the genre for him (though one with just-about equal camp value). There’s definitely more galactic verve for Barry here. And if his fans’ passion for this score has never abated, it’s because of the energy that resounds from this masterpiece in the composer’s already-formidable cannon, the feeling that Barry’s determined to give his all to validate the big bucks riding on one of Disney’s biggest gambles at the time. While the kind huge symphonic quality that filled John Williams’ STAR WARS scores is more than present here, Barry’s approach is darker and more militaristic, a seriously adventurous tone that does its best to mitigate some of the film’s goofier creations, not to mention some of the nuttier gaps in scientific logic to be seen outside of pre-Galileo Europe.

John Barry has always been about The Theme, that beautiful melodic force that just about every piece of his score flows into. What distinguishes THE BLACK HOLE is the sheer amount of memorable motifs that Barry came up with, from the heroically charging “Overture” to the eerily imposing “Main Title,” its swirling rhythm conjuring the kind of out-of-control, anti-gravity flight that will consume the film’s climax. Suspenseful beauty, brassy trepidation and eerie electronics (featuring the growling sound of that late 70’s great The Cosmic Beam) at first fill the cathedral-like confines of Reinhardt’s craft in “Cygnus Floating,” “The Door Opens” and “Six Robots,” music that leaves little doubt about his zombifying intentions for the Palomino’s visiting crew. In that respect, the riveting start of Barry’s BLACK HOLE score is a wind-up for Reinhardt to show his true colors, much in the same way the composer would score James Bond entering, and sneaking about the villain’s lair to the point of its explosion, especially in the neo sci-fi 007 case of YOU ONLY LIVE TWICE and MOONRAKER. Barry’s strength has always been about this kind of melodic stealth, the ability to get the maximum musical impact with the least fuss possible- a talent that THE BLACK HOLE’s elegant build is a textbook example of.

The bomb counter’s got to start rolling in any Bond film, which means the Barry doomsday march theme is at hand. This occurs to exceptional effect in the dire percussion of “Durant is Dead” as Reinhardt pivots his ship into the black hole, unleashing Barry at his slow-burn action best. And there’s far more of it in this terrifically complete presentation of his score, with one longtime favorite of mine being “Hot and Heavy.” While this music’s steady, slow percussion is a seeming misnomer for such a title, it’s exactly the kind of straightforward melodic writing that represents John Barry at his best. It’s also hard not to imagine Bond sticking it to a bad guy (or in this case a cute, googly-eyed robot puncturing an evil red one) with the orchestral exclamations of “Hotter and Heavier.” Barry also get to play the ultimate wages of sin and salvation with the malefic orchestrations, moaning electronics and heavenly flourish for “Into the Hole,” the film’s wacky old-time religion end that’s another reason for its endearment through the years.

As first LP’s to trumpet its digital virtues, THE BLACK HOLE started out sounding great on LP and cassette. And Disney has done a commensurate step-up for HOLE’s appearance CD, just as the format is vanishing into the vinyl nether-realm. And the sound again is nothing less than spectacular, courtesy of Randy Thornton, who also exceptionally restored 20,000 LEAGUES UNDER THE SEA. In fact, it’s a quest unto itself that he fascinatingly recounts for Intrada’s BLACK HOLE booklet, which also feature Jeff Bond’s always-excellent liner notes detailing HOLE’s production history and the musical story behind one of the soundtrack Grails of all Grails- which makes its truly digital premiere here after its LP release on iTunes in 2009. For few scores have signified the sweeping imagination that filled so many soundtrack fans in the birth of their geek love during the late 70’s and early 80’s. STAR WARS it still ain’t, let alone 20,000 LEAGUES UNDER THE SEA. But in terms of its power to transport its listeners to bold new worlds through the steady power of great themes, THE BLACK HOLE remains an exemplar.