Audio: On The Score With Hans Zimmer

If there’s one jolly scoring buccaneer who’s seemingly taken over the sound of Hollywood’s 3-D summer spectacles, then his name is Hans Zimmer. For few other composers tell you these adventure-effects spectacles and CG toons are steaming into the multiplex like the big, musical cannons of Zimmer’s good ship Remote Control, a vessel from which he and his team of musically aggressive privateers have unleashed a rollicking, booming sound that’s turned the idea of traditional scoring into something akin a rock concert- if not in sound, then certainly in attitude.

With the pop chops that prophetically killed the radio star, not to mention old school scoring, Zimmer’s rhythmically inventive approach has ranged from the Indonesian angst of The Weather Man to Matchstick Men’s Muzak and the Oscar-nominated African beat of Rain Man. But for mass audiences, it’s the furiously melodic likes of Gladiator, The Lion King, Inception, Batman Begins and Sherlock Holmes that’s elevated film music to a thing of rocking beauty, as Zimmer and his team have employed every oddball instrument and influence from Gustav Holst, Lebo M. and the sound of bat wings into percussively thematic adrenalin. 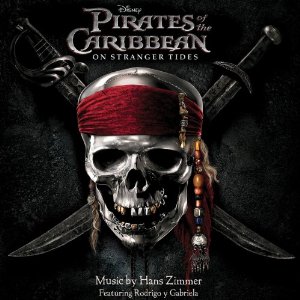 So leave it to Zimmer to turn the swashbuckling sound of the Korngoldian pirate epic on its head for the swaggering thrash of the “Pirates of the Caribbean” series, a journey that he picked up from protégé Klaus Badelt after its first voyage, an adventure of feverish violins, ripping brass and sail-swinging strings that now takes the Spanish guitar duo of Rodrigo and Gabriela on board for a scores that finally reach the fountain of youth on Latin strings. Beyond the theme recall of Jack Sparrow that’s the wind on Zimmer’s sails, the terrifically fun score for On Stranger Tides also finds major booty in the siren song of carnivorous mermaids and the pounding villainy of Blackbeard, all joining for the music of Saturday matinee thrills via the ADD youth generation. 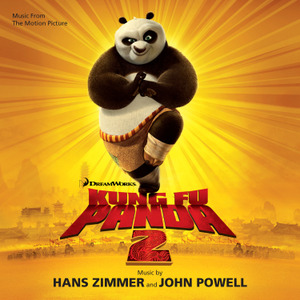 While the massive sound of the fourth Pirates has all hands on deck, Kung Fu Panda 2 gives equal voice to the Zimmer apprentice who’s arguably found the biggest rewards outside of his master’s musical dojo. And that be John Powell, the man who redefined Hollywood action scoring with the rhythmic pulse of The Bourne Identity, gave docudrama power to United 93, heard the blues in Hancock’s superhero and brought symphonic force to the X-Men’s Last Stand. But if Powell’s got a forte, then it’s scoring funny animals for animation, a hellzapoppin’ imagination that’s given life to Shrek, Horton, Antz and the birds of Rio, not to mention tamed dragons. Powell’s re-teaming with Zimmer for another Kung Fu Panda is the musical equivalent of letting Bruce Lee and Jackie Chan loose upon the CG world, with the kind of dynamic, Oriental-style martial arts action that kicks serious, family-friendly ass with western orchestral power. Not only do they revive the last Panda’s themes, but the duo’s furious fighting force in this new Panda is even more awesome in hitting every note of martial arts music, making its tropes come to new, vibrant life by combining lyrical Asian instruments with 70’s Afro funk vibe, Bondian spy vibes and speed-freak theme action that hits the spot for Dreamworks’ delightfully wisecracking toon ‘tude.

Now on a new episode of “On the Score,” Zimmer talks about his brand of delightful summer bombast and keeping steady on the strangest tides of all in Hollywood.