Audio: On the Score with Lorne Balfe

Piercing violins stand for the sound of Norman Bates. A lurking piano embodies a great white shark. Whispered voices the hockey-masked Jason. When thinking of one of the cinema’s most efficient musical annihilators, it’s clanking, metal percussion that stands for the near-invincible cyborg that was the first model of 1984’s “The Terminator.” Yet what makes this franchise so interestingly notable is how that killing machine evolved into a hero in “The Terminator’s” ensuing sequels – a fusion of symphonic bravery and relentless, electronic percussion that reaches a powerhouse peak with “Terminator: Genysis,” an epic, exciting score whose dynamically propulsive nature marks its creator Lorne Balfe as being well-honed at Hans Zimmer’s answer to Cyberdyne, a musical lab that’s given rise to the action sound of Hollywood’s future. 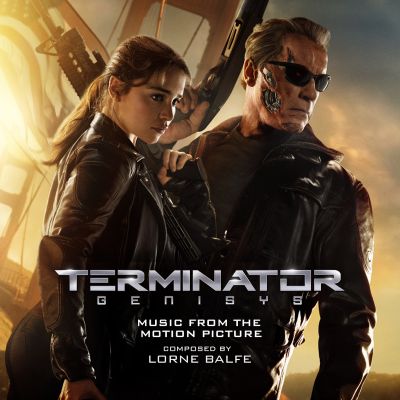 As one of the principal architects behind the dynamically propulsive sound of Zimmer’s Remote Control facility scores like “The Dark Knight,” “Inception” and “Sherlock Holmes,” the English-born Balfe has been a vital component of RC’s well-fueled machine, He’s also been building his own diverse solo career in numerous genres, with prolific videogame scoring ranging from the M-rated historical killer sweep of the “Assassin’s Creed” saga to the gentler action of “Skylanders.” Balfe has impressed with the sounds of steel on flesh for the castle siege of “Ironclad” to the chilling hunt for a serial killer amidst Alaska’s “The Frozen Ground.” Even more impressively, Balfe’s stylistic reach has shined in the documentary genre as he searched for the elusive “Salinger” while powerfully chronicling the creation of Israel’s air force in “Above and Beyond.”

Yet when it comes to the multiplex, “Terminator: Genisys” is undeniably Balfe’s biggest shot. What’s pleasantly surprising is just how human this score sounds as it brings out the shattering quest of Sarah Connor to somehow stop a relentless future, one where the villainous Skynet has corrupted her savior son John Connor into a man-machine. It’s a dynamic, and unexpectedly poignant score that shows Balfe’s command of fusing strong orchestral themes onto sonic boom thrills and emotional drive, all while not forgetting the stripped-down evil electronic sound that gave birth to Brad Fiedel’s original, iconic score – of which Balfe is sure to pay tribute to.

Now on a new episode of “On the Score,” Lorne Balfe talks about forging his own musical identity as one of sci-fi’s biggest franchises reboots itself to fight the future.