Every once in a while, some clever people come up with a solution to an issue that the DAW developers simply have not addressed. Such is the case with those DAWs that support the Audio Unit (AU) format. Audio Units is a format developed by Apple as part of Core Audio. Apple’s goal was to provide plug-ins with a standard of greater stability than sometimes was prevalent with Steinberg’s VST format, which allowed for more freelancing in a plug-ins implementation. Among the Macintosh apps that support the AU format are Logic Pro, Ableton Live, Garage Band, and Presonus Studio One. After a rocky transition period, the AU was firmly established and most plugin developers provided AU versions of their plug-ins.

The only problem is that when you go to open a list of your FX plugins or software instrument, they are organized by folders listed by the names of the developers with no way to customize the list into a more readable and searchable base.. What is you want to look for only compressors or EQs or synthesizers? Personally, I have 202 FX plug-ins alone. What can I do to make my searching them out more efficient?? The answer is “Deal with it, you are out of luck, buddy.”

I don’t know who these people are as this is apparently their first software release but they have come to my rescue and those of you AU users like me with a non-destructive solution that will set you back a whopping $34.99 US. Finally I can customize my audio units putting them in folders and then even in sub folders. (Ableton Live does not support sub folders.)

I don’t usually include screen captures in this column but I will have to do so for this column in order to do this product justice.

In Pic 1, here is Auganizer open and displaying my plug-ins. There are too many to see at once so I in the right hand column I have selected Universal Audio to filter out all of the others, as they are my most numerous. Auganizer also allows you to Show All of show only Genertors, Instruments, Effects, and MIDI Controlled Effects 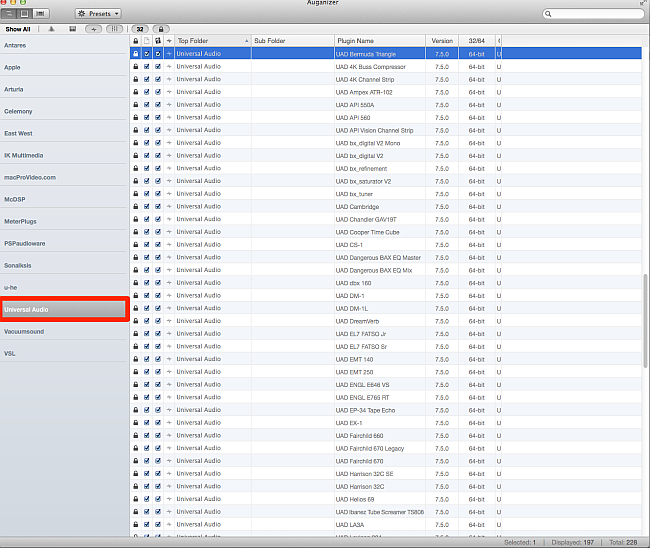 Let us say I want to see all my compressors and limiters in a single folder called Dynamics. Or better yet, since I have so many UAD compressors, maybe a subfolder just called Compressors.

The first thing I need to do in Auganizer is to unlock some of the plug-ins by clicking on the lock icons. In Pic 2, notice that I have unlocked a bunch of them.

Clicking on any one of them now gives me a chance to name either the top folder or subfolder or both. See Pic 3.

For my first attempt I decide to name the subfolder Compressors. The result is what you see in Pic 4.

Now if I open my DAW, which in my case is Logic Pro X, and go to open an Audio FX plug-in, in my UAD plugins list, at the top is a Compressors folder, as you see in Pic 5. 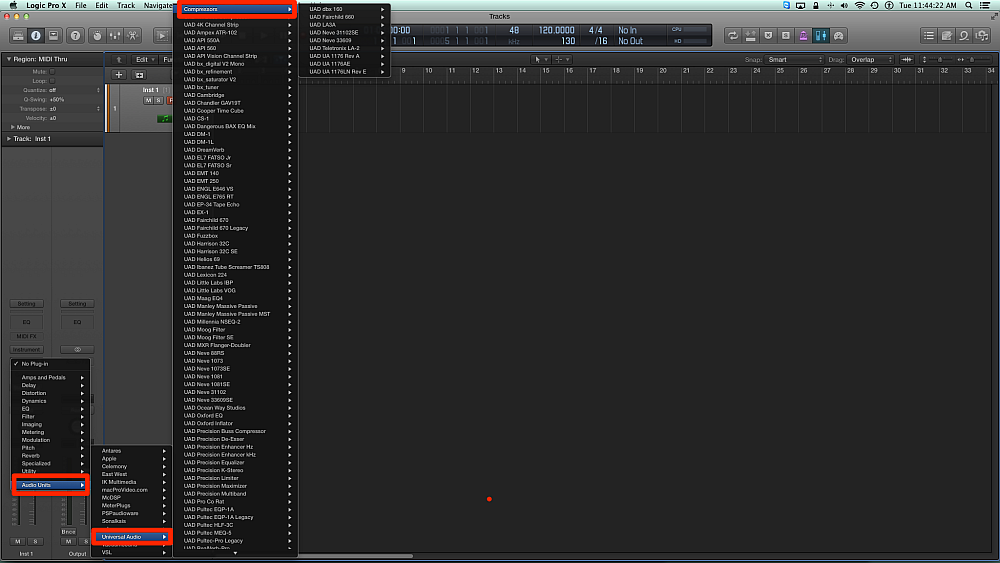 What if I decide that actually a subfolder was the wrong way to go? Maybe I want a top folder for all developers’ compressors. Or maybe I want a Favorites folder.

No problem. I quit Logic Pro and back in Auganizer and under the Presets menu, I can return to the original settings, as you see I am doing in Pic 6.

These guys/gals have made me very happy. It will take me a good hour or so to customize this exactly the way I want, but it is going to make my plug-in selection a lot easier. I cannot wait to see what they come up with next.