Beats ‘n resilience of WHOSE STREETS?

“I’m the daughter of a jazz singer and grew up surrounded by music…doing homework in the back of jazz sessions and surrounded by some of the greatest musicians there were. When we were doing a late-night scoring session for the film with bassist Russel Hall from footage (of Ferguson, MO. uprising) that was bringing up so many personal burning questions that we had, it just lined up when it came time to do the score,” reflects WHOSE STREETS? first-time filmmaker Sabaah Folayan.

Whose Streets? is an unflinching look at how the killing of 18-year-old Mike Brown inspired a community to fight back and sparked a global movement.

“I just have to give credit props to Samora (Pinderhughes, Composer) because he came into a situation of first-time filmmakers, and he was able to be so generous and open during the creative process while never letting us go off-track.” 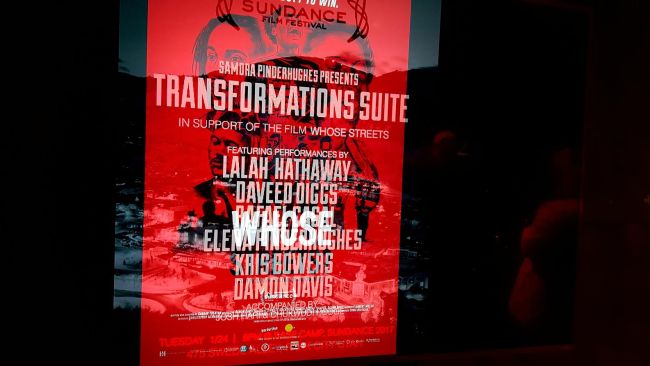 “I’m honored and just feel blessed to be a part of this film. I don’t come from a musical family but just fell into it because it was a calling. Jazz was my first real love…I went to the Julliard School and studied with one of the great pianists, Kenny Baron, then lucky enough to do the Sundance Composer’s Lab, which is when I learned what film music is about. Through the Lab, I was connected with Sabaah and Damon (Davis, co-Director). I had just released an album called Transformations, which is exactly what this film is about…the history of African diaspora protest movements, so I was inspired to write for a piece about Ferguson.”

“At that point (music scoring) in the filmmaking, it was really stressful for me personally,” advances co-Director Damon Davis. “So those recording sessions took me back to something, music, that always took stress away, an organic, cleansing thing. I get super giddy about music and so does he (Samora), so we knew he was our guy for this.”

Filmmaker Ms. Folayan turns to Mr. Pinderhughes to share an anecdote, “I don’t know if you even realized this but when you came on, we were in our edit way past when we should’ve been and stressed, and this was something that was just working, a relief. You had been working on your Transformations Suite for years, and there was that one beautiful, celebratory cue at the end of the film during a wedding that made the scene so gorgeous.” 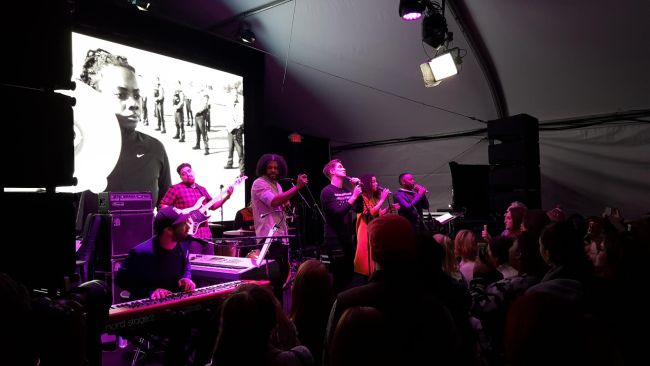 Mr. Pinderhughes reflects, “The way jazz developed historically and in how it relates to this film, with how jazz is presented now, is that it’s academic, old, or complex, but just like most black art forms, they came from ‘the hood’ first. This film comes from poverty and struggle of the streets, it doesn’t come from schools or academies, so that’s what jazz means to me. So, what we do with jazz music, especially representing iconic folks like Billy Higgins and Max Roach, is the inspirations that were part of this film, those are members that were openly pro-black, about the music speaking in the most freeing way possible, people who are from the streets, not from concert halls.”

Ms. Folayan adds, “Ya, during the scoring process, it was spiritual, and there’s something about jazz improvisation tradition, it’s not like you can do just anything, can’t just be turned out, it has to be felt. It was crazy working with Samora when we both felt it at the same time.”

“Ya, and in order to have those moments, you have to all be in a space to be willing to fail. Because if I was pressured to get it right the first time, I wouldn’t have been able to get to where we got, and that’s why I was so happy to go through that process with them. For this particular project, it was really important that it not be me just doing stuff in isolation, then sending it to them. We would go to each other’s house and work…it was super organic between us.” 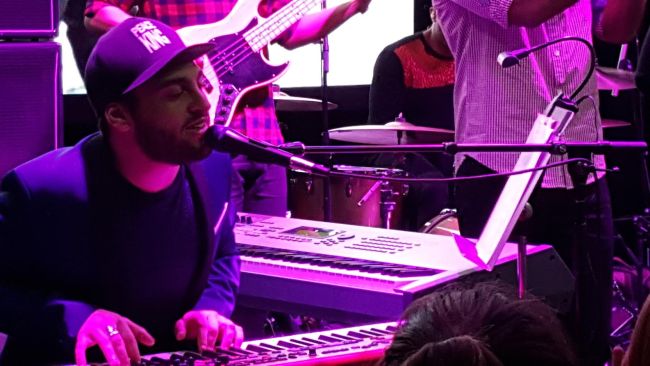 I ask Mr. Pinderhughes to talk about what it was like to communicate emotion to both a musician (Mr. Davis) and not a musician (Ms. Folayan)? He suggests, “Ya you know, because they’re clearly both artists, it wasn’t really that different. Even though Sabaah doesn’t play (instruments), she is ‘a musician.’ All her family are musicians and she thinks like a musician. They both knew what they wanted and it was my job to just translate it, like for example, the idea of chapter markings, that came late in the process but was an idea Sabaah had from the beginning. So, we tried a couple things that didn’t work but then we had that time and space and we figured it out. It required the right musicians and me figuring out what they were trying to get to and being able to translate that. Damon is a producer, so we used some of his songs and mine, but a bunch we produced together.”

Mr. Davis elaborates, “St. Louis is a landmark, monumental place but so are every musical forms that’s come out of the United States, whether it’s blues, jazz, rock, and we wanted to deliver it so it felt like St. Louis. Chuck Berry, one of the inventors of rock ‘n roll, would come out and play in St. Louis once a month. Ike and Tina Turner. I’m from East St. Louis, my last name is Davis, so ya, Miles Davis was a major influence in my life, and more importantly, who these people were in the world, when it comes to their political stances. My parents were a little older, so this music was what I heard just by proxy coming up that other kids my age didn’t. Musicians were at the forefront of that political era movement, and similarly to what’s happening today, the hip-hop community came out in support for Ferguson.”

Ms. Folayan emphasizes, “It worked that we made the decision not to use temp score because we didn’t want to cut the film with music that wasn’t for the film and I’d attribute that to Damon who came in with such a strong sense of musical identity, so when things weren’t right, we had someone who could definitively say, this is not the tone. We were in the editing stage a long time, and didn’t think maybe we would even use some of the music. Samora said for quite a while, I don’t know if these cues we’re even going to use, then did, so everything added up to what felt like destiny.” 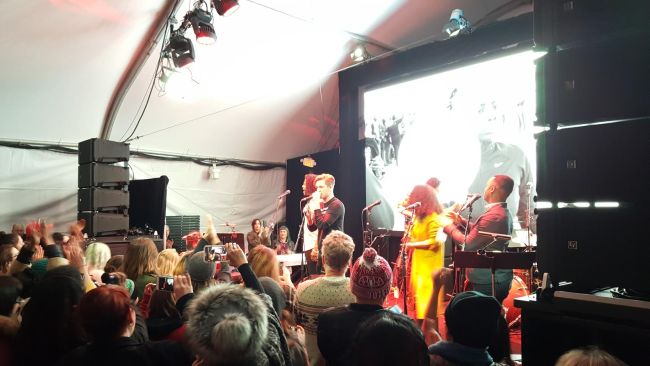 “And we wrote a lot more music than we used in the film, like sometimes we say, ‘oh, this is a dope track but doesn’t work for the movie. So the editing process is as important as the writing…and we had great help,” exclaims Mr. Pinderhughes.

For example, Ms. Folayan gives props to Story Consultant Carol Dysinger, “Carol also spent a lot of time as a Music Editor, so she was able to come in and orient us all to what we needed to be looking for as a way music can function best.”

For many in the Black Lives Matter and Ferguson incident, a solidarity with the Palestinian struggle prevailed. Mr. Davis resonates on this development, “maybe there should’ve been some conversation about incorporating some regional musical elements.”

“I think part of the reason we didn’t use Palestinian instruments is because we made a conscious choice not to write for specific characters or for a little pieces of story because we tried that and it didn’t work, recalls Mr. Pinderhughes.

Ms. Folayan clarifies, “this was always about St. Louis, and while we do stand in solidarity with Palestine, to tell this story, we had to stay focused on St. Louis.” 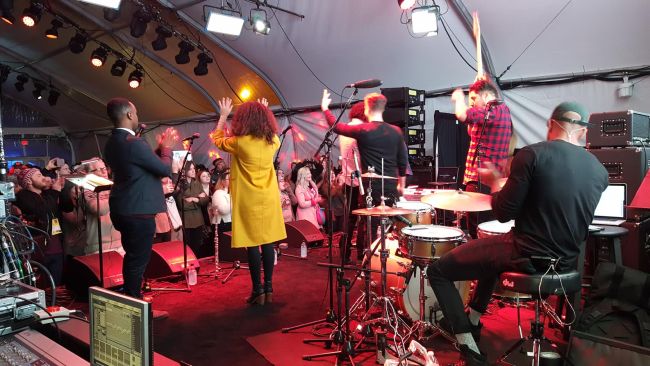 I suggest that the Ferguson struggle and this film say some poignant stuff not just about the St. Louis area but more globally, about other cultures’ necessity to have their speaking-truth-to-power voice heard, and ask what would this team ideally like for their score to say to other world music regions?

Mr. Pinderhughes offers, “I think the reason the best art speaks to so many people is because it’s so specific, and this film speaks to the Ferguson situation so specifically. But I’m from the (San Francisco) Bay area, and we have had and are having so many similar issues and folks in conversation about it, so I think that it will be a lot of the same thing for people in London, India, South Africa, etc. Number one, they’ll get a snap shot of what this Ferguson thing and this music is, and relate to a group of people that stood up as a collective community…not only that, built their own culture.”

He continues, “A quarter of the music in the film is the community chanting in the streets…that is the music. I learned a lot on this film that language and the way people speak is a form of music.”

Mr. Davis wraps up with, “Samora was talking about Oakland, well the very last song is called, ‘Freedom Song,’ and I produced that song with a Boston songwriter, Natandra Driscoll, who sang and wrote those lyrics. When I was in Boston, she stopped and asked to sing a song for me while we were working on the movie and I said, ‘we have to record this, so she sent the lyrics and I wrote the music around them. That was someone from a completely different community, feeling a lot of the same stuff that we were feeling in Ferguson, and that ended up in the movie.”

Kendrick Lamar’s incomparable civil rights anthem, ‘Alright’ closes the picture over the end credit crawl and Ms. Folayan beams with, “thankfully our Music Supervisor was able to access those licenses for us, and we believe artists deserve to get paid for their work from that side of the community…oh, and I too was very excited Kendrick supported our struggles.