The 60’s were the halcyon days of al-star spectacles, wherein casts of thousands would bump into each other in every scene, as if the films themselves just happened to be Friar’s Club roasts. Kirk Douglas. Burt Lancaster and George C. Scott were unmasked in THE LIST OF ADRIAN MESSENGER while Jimmy Stewart, Spencer Tracey and John Wayne showed us HOW THE WEST WAS WON, all while Rex Harrison, Ingrid Bergman and Omar Sharif rode THE YELLOW ROLLS-ROYCE. But perhaps comedy epics benefited the most from having Hollywood heavyweights in their decidedly massive, if lightweight vehicles, especially the madcap chases of 1963’s IT’S A MAD MAD MAD MAD WORLD and 1965’s THOSE MAGNIFICENT MEN IN THEIR FLYING MACHINES (or how I flew from London to Paris in 25 hours and 11 minutes). Though they might have had titles almost as long as their running times (so I’ll mostly only be using one title for each during the rest of this double review), the two composers who approached these pictures certainly weren’t going to take it easy with the reams of music they’d have to produced. Instead, Ernest Gold and Ron Goodwin poured all of their raucous invention into WORLD and MACHINES, giving these comedy scores a thematic ambition worthy of any dramatic who’s-who’s list, especially now that these legendarily hilarious scores have been given wacky, restored energy by La La Land and Intrada records. 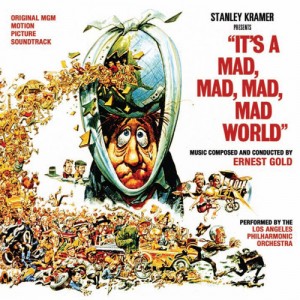 Viewed as the 1941of its day (and just as wonderfully over-the-top), WORLD marked the attempt of uber-serious filmmaker Stanley Kramer (THE DEFIANT ONES, ON THE BEACH) to make a movie with nary a frown in it- yet doing so on a scale of sheer destruction to make Irwin Allen’s disaster pictures look like lessons in origami-making. Thankfully, Kramer’s favorite composer Ernest Gold (who won an Oscar for the director’s EXODUS) had the background to goose any stuff that got overly dramatic, especially with a number of Gerald McBoing-Boing cartoons under his musical belt. But if that seemed to indicate that Gold was going to take a super-wacky approach to WORLD’s madcap lesson in the cataclysmic perils of greed, the composer instead took a far more clever tact. Namely, he’d play the treasure hunt as if its pursuers were on a merry go round that broke down, its waltzing calliope rhythms speeding up until the horses flew off the tracks, and right into a bunch of hospital beds.

Starting off with a song whose planetary puns (written by Mack David) are worthy of the best Broadway musical-comedy lyrics, Gold is sure to have his trans-continental chase driven first and foremost by jaunty themes. Cute melodic whimsy, as opposed to cartoon-pratfall cacophony, is the order of the day. At times sounding like a jazzy 1920’s soft-shoe routine, at others like an brass band trying to retain its composure, and often as a (perhaps unknowing) goof on 60’s easy listening, WORLD is surprising for just how highly listenable it is- always maintaining a Carl Stalling WB ‘toon spirit, as somewhat battened down with a couple of lush string martinis. Yet there’s raucous stuff to be sure on hand, from the brassy, blaring human horse race that starts off the search for the buried moolah (complete with country standards) to the mock, escalating danger that brings the chase to its fire ladder end. Then of course, there’s the magnificent heavenly chorus for the “Big W.” Yet beneath the circus music shenanigans, there’s a feeling of sad-sack poignancy as to just how low this ship of fools will sink to get their self-deserved reward. It’s as if Gold is shaking a tssk-tssk finger, while both laughing at, and with, the characters, his score ending up downright tender as everyone licks their wounds, and shattered egos. In that feat, Gold hears the kind of human comedy that Stanley Kramer’s pictures were always about, even when no one was laughing in them.

Subject to complicated production and post release re-edits (a convoluted history made wonderfully lucid by Jeff Bond’s liner notes), WORLD has grown to become one of the most beloved cult films of all time. And almost as notorious as trying to find the location of the Big W is ferreting out Gold’s score. Released about a dozen times over the years from LP to cassette to CD across the globe, there’s never been a “definitive” WORLD as of yet. So while the original tracks still lie with Jimmy Durante’s kicked can, album producer Ray Faiola has done his best to create the most comprehensive score from the film’s six-track stereo stems. But it’s likely fans will be just as happy with this set’s second CD, which features the arguably superior, shortened re-do by the Hollywood Studio Orchestra. If editing wasn’t Kramer’s strong suit, it certainly was Gold’s, whose judicious selections prove arguably even more satisfying than the whole megilah. Exceptionally transferred from that 1965 LP, this version of the WORLD truly pops, especially with the addition of two Shirelles songs. So until some zany collector-hoarder kicks another can to bring about a race of this score’s most zealous know-it-alls, this doubly MAD CD will likely remain the last word on comedy music that’s stayed Gold. As for composer Ron Goodwin, few musicians gave Englishmen the rousing valor to take on Jerry in such classic WW2 scores as THE BATTLE OF BRITAIN, WHERE EAGLES DARE, OPERATION CROSSBOW and 633 SQUADRON- many of which involved one scene of ace fighter pilots blasting dastardly Nazis. So it’s particularly ironic that one of Goodwin’s best scores pretty much made mincemeat out of the airborne valor he built a storied career on. The subversive fun starts from the hilariously awful brass band take on the Fox fanfare, which leads into the titular song that’s somehow been remembered over the score (no doubt due to the dialogue-filled album we’ve had until this glorious double score CD). Like 1965’s other dawn-of-modern-transportation chase movie THE GREAT RACE, MACHINES has the embryonic state of the flying art trying to sputter its way to Paris with an international cast that starred gap-toothed Terry-Thomas, GOLDFINGER’s Gert Frobe and some guy named Benny Hill. Goodwin does a pretty astonishing job of making his score span the globe, jetting to every cliché national standard from “Frere Jacques” to “Deutschland Uber Alles and “Rule Britannia,” and then back again. When anthems aren’t blasting about, Goodwin shamelessly Can-Can’s in between bursts of Chinese percussion and western harmonicas. You even get “Ride of the Valkyries,” “The Blue Danube” and The Monty Python theme song in the seemingly indefatigable bunch, with oriental, Germanic, French and a western harmonica thematically identifying the contestants.

Yet there’s infinitely more to Goodwin’s work than just hopping around with musical jingoism, a thoughtfulness that Julie Kirgo zeroes in on in her enthusiastic liner notes. Though far slapstick-ier in tone in his approach than Ernest Gold, Goodwin’s score is just as terrific because of its broadness. Not only does his ragtime band approach instantly delineate the film’s early 1900’s setting, but also the brassy bounding about sings with the lush, proud strings of English pomp and circumstance. It’s a can-do spirit that’s at once satirical, and the valorous wind on its pilots’ backs. Take the zaniness out when you can, and you’ll hear the gorgeous, soaring orchestrations that are all about the noble wonder and elation of flight, a spirit that Goodwin captured like few composers here, or across the pond.

By the time his score finally reaches Paris, Goodwin’s brilliantly succeeded in capturing a twinkling, thrilling majesty that’s the equals the rest of the soundtrack’s whirling dervish segues and musically historical mincemeat. Like a WORLD that finds a shared soul in poignant laughter, FLYING ultimately is so elating because it’s a grand, goofy salute to the Esprit de corps that unites every nation, not to mention Robert Morley, Red Skeleton and Benny Hill. Those indeed were the all-star music-comedy days.