“What was cool for me was how our composers and musicians all strive for perfection with a sort of stubborn, passionate balance like I do. During our process, I just left them alone to do and deliver what they’re really good at and I was consistently pleasantly surprised,” 2015 Sundance Film Festival’s CARTEL LAND U.S. Documentary Directing and Excellence in Cinematography award-winning filmmaker, Matthew Heineman confidently offers as we explore his music team’s creative collaboration process in composer H. Scott Salinas’ (Academy Award-nominated THE SQUARE, HBO’s THE NEWSROOM, NBC’s ALLEGIANCE) Santa Monica studio.

Fast forward rewind back to how CARTEL LAND arrived at this year’s 2015 festival with a fearless whisper that transcended into an organically-evolved howl with each audience screening. Prior to arriving at this year’s festival, I intuited this was a project that may possibly best be experienced midst non-journalist folks (rather than at a Press Screening), so prioritized arranging an advanced seat for a public audience viewing of the film at Park City’s Library Theater … during the showing and following Q&A, one could hear a pin hit the floor as the motionless audience appeared fully intrigued.

As highlighted above, the film went on to earn this year’s festival U.S. Documentary Directing and Excellence in Cinematography awards. Did the film’s score factor into how well it was received? Let’s meet Matthew and his composers.

Mr. Greenberg (JG): I come from an songwriter/band/melody background and Scott brings a seasoned dissonance “soundscape” sensibility in this first collaboration for us.

Mr.Salinas (SS): I have a little more scoring experience but Jackson’s songwriting and composition instincts are exceptional. We and Matt (Director Matthew Heineman) were on the same creative approach page right from the start.

Mr. Heineman (MH): We had three days to polish our last work session of this score. Matt came out for these intense final work days of final cues…kind of more like haunting sounds but they sounded really eerie and the guys offered that that was intended to set a specific tone for the eventual audience emotional experience. I was impressed and it kept getting better.

Michael Rogers (MR): Overall in general and specifically for this project, what is a key approach priority for you guys?

SS: Organic composition and performances. I came up early on in my musical development as a vibraphonist and when I discovered jazz and classical music at Berklee College, my whole world turned upside down. I sought out exploring outside my comfort zone … kept ‘the junk’ and stuff in the past I used to throw out because it wasn’t a conventional way to do stuff.”

JG: Our process was a blast ’cause Matt created the supportive vibe so that we got to play, experiment, get into areas we probably wouldn’t have if he hadn’t.”

SS: Our foundation architecture was closest to jazz principals of confident improv because we needed to bridge two worlds, the U.S. and Mexico sensibilities in a way that is hopefully transparent to audiences while they’re watching the film.

MR: At what point did Matt bring you composers into the creative mix?

SS: Thankfully, very early, which as you of all people know is unnecessarily rare and also optimal in this business. So we were able to send Matt soundscape stems while they were still shooting principal stuff. It enabled us to build and deliver long sound and music bed wave files, for instance we played a lot with cicada crickets, cello, layered reverb, neutral harmonies, a colloquial charrango guitar, which is kind of a small Latin ukulele, then darker, edgier flow.

JG: As a team, we were all fortunately comfortable with ‘unstable tension’ progressions and open sound space, toward a more declarative resolution. We both have a jazz improv background, relaxed with that knowledge base, so we offered to Matt the option of joining us in this sort of experimentation ‘level of safety. We kind of found ourselves utilizing a magic that can happen making mistakes and gradually coaxing our process in a right direction we’re totally excited about.”

SS: Matt is amazing to collaborate with cause he can sit quietly while we share initially part, toward all of our process, then he when we’ve got him what directions we’re going in, he respectfully speaks up, offers his impressions and suggestions …

JG: … so, this establishes trust, eliminates any fears or doubts in us to take chances and deliver stuff even we couldn’t imagine without his support. Let’s appreciate, this filmmaker wouldn’t have gotten this far in this industry without confidence.

SS: He would sit and listen and didn’t say anything for hours, so for us, it was more him encouraging our experience, not filtering our process. He’d just occasionally ask how we felt about either ‘toning it down,’ or nudge us into an emotional vibe he felt may work in specific sections.

MR: Matthew, do you play music?

MH: No, but they started sending me cello, cicada crickets, charrango, and guitar stems and at first, it was like attempting to read a book in Chinese, and couldn’t imagine what they were intending, though their textural layers were really interesting and made sense over time. On this project, I was open to working with four editors too, so gradually got it, appreciated how working with these two composers, Scott and Jackson created the score with which we ended up. Everyone had a part, leap-frogged on each other’s stuff.

MR: Scott and Jackson, what would you identify as most helping you guys convey in music what Matthew was looking for in textural sound for this project?

SS: Thankfully we’re both mostly fluent in technical proficiency and experience expertise. Tools like Logic 10 and this cool, new toy that transforms guitar into synth patches. We presented to Matt a layering ‘scaffolding’ and early on dealt with wondering whether we’d built in too much music, but Matt would quietly sit in the back of the room and occasionally offer his responses to our instrumentation, especially in how we featured local color with regional instruments.

MH: Once our narrative structure took on the challenges parallels on both sides of the border, we explored sort of swapping the expected sounds and musical color of both nations, which opened up our experimenting to try anything and everything with confidence. For instance, an obvious choice to score Nailer (U.S. vigilante Tim “Nailer” Foley).

MH: Ha, first passes, I’m the first to admit, I struggled with not wanting to lose our temp music. I had ‘temp love.’

SS: And I originally chuckled with some of Matt’s temp stuff, cause I felt it kind of sounded like a 5 year old’s birthday music but came to get where he was coming from and found ways to fold it in.

MH: It quickly evolved into a mix of that stuff and natural sounds … bonfires, cicadas, cooking meth, etc. that we recorded at their source, then the guys looped into spiraling sounds.

MR: And how did you weave that into a final mix in which we can definitely still hear all that source stuff in addition to the subtle up-front figure instrumentation as well?

SS: We ended up using so much of that stuff throughout the film, and stitched it into the original guitar piece during the end credit crawl too. This was one of the most challenging scores for all the regional instruments, none-linear texture, and structure.

JG: Most of the foundation composition we handled writing and experimenting away from picture, so we weren’t married to images and cool with the reality that some cues don’t work, so we dumped them. Like, for the first time, I sang a little and submitted atmospheric vocalizations. In the footage, we had women singing mourning songs at a funeral and the human voice is so evocative, challenging to emulate with instruments or electronics, so I just started vocalizing what I felt emotionally and we worked it into the mix.

MH: In the end, our movie was a layering expression of prior expectations and unexpected turns of events we couldn’t have anticipated and our score kind of evolved in similarly complimentary way.

MR: Well, thank you and congratulations guys, y’all achieved an unprecedented intimate access platform for a sadly, seems unnecessarily haunting, perilous reality on both sides of the U.S./Mexico border. Let’s pray some kind of increased safety and healing can perhaps be reflected upon by folks entrenched in these lives. 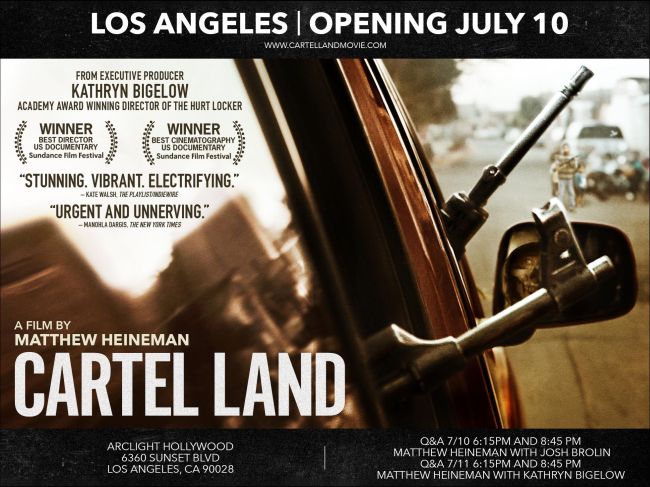