CD Review: How To Train Your Dragon – Original Soundtrack

There’s something about dragons that brings out a composer’s best work. But then, perhaps no beast holds such emotional potential, as literature, film and music have already demonstrated since the dawn of creativity. For it’s a beast that can be savage, noble, evil and all-knowing at once, a creature capable of bringing out our dragon-battling best, while at the same time being in awe of a monster that can soar to the heavens. 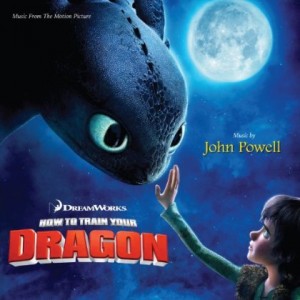 The better qualities of dragons are on rousing display in John Powell’s score for HOW TO TRAIN YOUR DRAGON. A veteran of Dreamworks animation with the likes of ANTZ, SHREK and KUNG FU PANDA (not to mention composing for a host of other studios’ cartoon creatures), Powell’s terrifically energetic approach has done much to straightly play the smarty pants pop humor the studio is notorious for (though which it’s gotten admittedly less jokey about over the years). While PANDA (co-composed with Hans Zimmer) set a new bar with how to give a human-sounding excitement to funny critters going through martial arts moves, DRAGON positively blows everything away before it with a story that can stand with the best live-action fantasies. For here, it’s the people doing the talking, as a teen Viking reject finds his self-worth by befriending a particularly feared dragon. And through no end of spectacular flying sequences, and a climactic fight against a Godzilla-sized creature, shows that man and beast can just get along

If anything, Powell’s exhilarating work on DRAGON has more in common with the energy he’s given to such live action superhero scores as JUMPER, X-MEN UNITED and HANCOCK than an equally capable cartoon work like CHCKEN RUN. For there’s a real sense of flight, danger and excitement to his melodies, an approach that captures the feeling of attaining a new power that opens the world up to you- though here it’s a reptilian steed that provides that key. Powell’s DRAGON positively swoops, dives and breathes fire with melodic panache, a sense of legendary melody that’s up to the rhythmic minute in its approach. And with every increasingly impressive score he does, Powell is sure to put a fun kink into the mix. X-MEN had a bolero, HANCOCK the blues, and DRAGON a jolly Scottish jig. Sure it might be strange to hear helmeted Vikings as kilted highlanders, but it’s a bagpipe and percussion dare that pays off in fun, dance-worthy spades here (while no doubt bringing images of Shrek to mind). Yet Powell’s musical humor delineates the characters instead of being goofy, and manages to be dangerous as well when need be. But beyond the kind of bombastic excitement fans expect from Powell, what’s often best in his DRAGON is the music for the bonding between boy and dragon- the ethereal, world music nature of their growing friendship, and tenderness capturing an AVATAR-worthy glow of man and beast- especially when a full orchestra joins with otherworldly percussion for the film’s stunning 3-D flights. Like this terrific film, Powell’s music works by going for heart as much as spectacle. It makes us believe a toon dragon can fly, let alone that we can make nice with it. 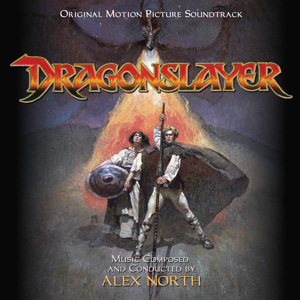 When it came to making me believe a dragon was real, no movie will touch 1981’s DRAGONSLAYER, for which Phil Tippet’s stunning use of “go motion” made Vermithrax Projorative crawl, breath fire and dive-bomb through the clouds like a mythical Top Gun, essentially roasting stop motion animation in the process. But beyond its revolutionary effects, DRAGONSLAYER was the first fantasy that made me feel like I was living in the Dark Ages as well, no doubt thanks to the primal, percussive score of the great Alex North. A composer with an already impressive resume when it came to period epics like SPARTACUS and CLEOPATRA, North somehow hadn’t scored a full-blown fantasy until late into his career. Because of that, DRAGONSLAYER would stand as North’s last impressionistic masterpiece. For where other, equally esteemed composers used a straight, symphonically lush lines when it came to scoring films set in the distant past, North delighted in jagged, ever-changing, and often harsh rhythms to put spice into the glossy time machine.

If most “modern” classical music turned their noses up at film scoring, then North’s experimental, yet picture-perfect work had the distinction of being able to function on both stages. DRAGONSLAYER stands as North’s answer to “The Rites of Spring” with a brassy, guttural melodies that are pure Prokofiev. But then, DRAGONSLAYER is about old, untamed magic, where the last great wizard is pitted against the final remnant of the days when dragons ruled the earth. There’s a resulting grandeur, as well as somberness to that theme, which North’s undulating score has in raw, horn-heavy spades- a sound that’s very much like the raw, fiery rock that Vermithrax springs from to take its virgin sacrifices. North also gives a sense of religiosity to the new Catholicism that has helped put the dragon’s pagan ilk in its place. Even the jolly dance rhythms have a manic, experimental quality to them. In short, DRAGONSLAYER is mostly about symphonic weight, as far apart from the romantic sound a more romantic composer might have produced for the subject as imaginable. For when Vermithrax rears its scaly head, North’s approach is all about fearsome, yet noble darkness, as if he was encountering a god of old on its musically primordial turf.

Though a financial turkey when it came out, DRAGONSLAYER was a brilliant film well ahead of its time in every respect, especially in the kind of impressionistic epic fantasy score that wouldn’t really be heard again until Howard Shore tackled the LORD OF THE RINGS trilogy. And through those decades, North’s work has been a hugely in-demand collector’s item- its only licensed release being a two-record LP, and an improperly recorded CD of suspicious origins. La La Land’s new release is a spectacular revelation that makes DRAGONSLAYER roar like never before, collecting all of North’s music as it was intended for the film, with a dynamic sonic range that’s properly heard for the first time. The importance of it score is given due tribute in a luxurious liner note booklet with excellently detailed liner notes by Jeff Bond. At last, Vermithrax (and North’s demanding masterwork) have arrived for the digital age, with all of his ancient musical magic intact. 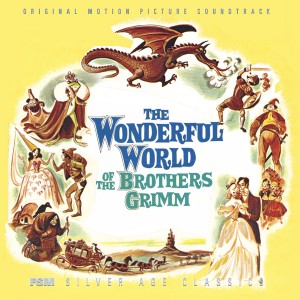 Bad dragon music doesn’t get more delightfully charming, or old school than THE WONDERFUL WORLD OF THE BROTHERS GRIMM. George Pal produced this omnibus film based on three tales by the famous brothers, a segment of which had knightly Terry Thomas and his manservant Buddy Hackett taking on the beast. Composer Leigh Harline (who’d later team with Pal for THE SEVEN FACES OF DR. LAO (its score also on FSM)) was particularly adept at composing lush, family-friendly fantasy after his Oscar winning score for Walt Disney’s PINOCCHIO. Harline would give the same melodic enchant to BROTHERS GRIMM, whose score certainly didn’t have the nastily ironic impact that the siblings’ fairy tales were known for. Using a delightful, THIRD MAN-esque approach to play the Grimms’ Germanic roots, Harline employed dangerously bumbling brass for the inept dragon slayers of “The Singing Bone” segment, gently suspenseful, cartoon-esque heraldry that makes Wah Chang’s stop-motion puppet even more comically endearing. Ditto Bob Merrill’s bravely presumptuous lyrics for Thomas and Hackett’s “Dee-Are-A-Gee-O-En (Dragon)” – though the electronic voice, and song of the subsequently slayed creature’s bone is eerie stuff indeed.

As the first Cinerama epic when it came out in 1962, THE WONDERFUL WORLD OF THE BROTHERS GRIMM remains unaccountably missing on widescreen DVD. And while Film Score Monthly’s release of Harline’s score can’t compare to the lavish, library-worthy LP “book” that was first released for its road show presentation, this two-disc set of the complete BROTHERS soundtrack (accompanied by David Rose’s easy listening take on GRIMM and Harline’s score for THE HONEYMOON MACHINE) certainly does this charming music proud. Listening to this full-on GRIMM is a throwback in the best sense to the gentle, sweeping melodies that are all about the stuff of childhood innocence, a mindset that’s ripe for stories of dancing royalty, cobblers’ elves and a snapping dragon as sweet-sounding as a puppy dog’s tail.