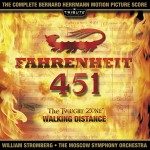 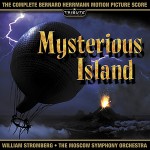 When it seems that many film composers have been forced to lose their voice, it’s a rewarding throwback to hear two of the best scores from a cantankerously loud musician, a maestro who took great delight in yelling his bold melodies to the rafters, or pitching dark romance down to the aisle seat. That man was Bernard Herrmann, who along with Miklos Rozsa produced something beyond the lush, instantly accessible melodies that were being heard in Hollywood’s golden age. Since his scoring debut on Citizen Kane, Herrmann’s grandly thematic approach would make such scores as Jane Eyre and On Dangerous Ground challenge listeners with their dark, complex themes. And that isn’t to mention the effect his scores had on sci-fi and horror fans, from the Theremin-driven Day The Earth Stood Still to the homicidal whistling of The Twisted Nerve and Psycho’s lethally striking strings.

For many, the two jewels in Herrmann’s genre crown are Mysterious Island and Fahrenheit 451, one soundtrack as ominously big as the other is suspensefully subtle. Like such old-school vinyl collectors as Christopher Young (who contributes heartfelt liner notes to both albums), I discovered the power of Island and Fahrenheit with “The Fantasy Film World of Bernard Herrmann” – a series of classic excerpts conducted by The Man himself. And though Mysterious Island has since been released in truncated form (with Fahrenheit also given an eleven-minute excerpt), you’ve never really heard Herrmann’s scores until you’ve listened to their new Tribute performances. Label heads Anna Bonn, John Morgan and William Stromberg have gone all the way to Russia to produce exceptional and complete recordings of these works. And with such re-recordings as Son Of Kong, The Egyptian and Moby Dick to their credits, conductor Stromberg and score re-constructionist Morgan given a new, electrifying life to Herrmann that would make Dr. Frankenstein jealous, making these oft revived works sing with all of their darkly melodic power.

Mysterious Island has always been one of the nuttier fantasies that Herrmann scored for Ray Harryhausen (the others being Jason And The Argonauts, The Three Worlds Of Gulliver and The Seventh Voyage Of Sinbad), particularly for how its giant creatures ended up as the survivors’ super-sized dinners. Herrmann certainly got the joke, from percussion becoming the pincers of monster crab, a very big chicken embodied by a playfully Baroque bassoon, or clarinets becoming an ersatz “Flight of the Bumblebee” for the huge, honeycombing creatures. Yet the clever music that Herrmann gave to Harryhausen’s eccentric creations is what helps make them so memorable, not to mention Island’s enchanting, and foreboding atmosphere. Like the composer’s other remarkable score for Journey To The Center Of The Earth, Herrmann’s lush, melancholy use of strings and harps makes you feel like you’re cut off in some age-old, hypnotic place. And this Island is surrounded by crashing orchestral waves, perhaps music’s greatest embodiment of the surge and retreat of the ocean – a call and response that’s echoed by the wind instruments that yodel across the seemingly uninhabited island. When some beast isn’t pouncing on its castaways, Herrmann conveys the strange beauty of the place through gossamer harps and strings, almost lulling you to sleep before the next grand symphonic attack (an action sound that Herrmann would also have used effectively in North By Northwest). But the real standout here is the Muscovite’s stupendous bass, a low tone that positively vibrates through your skeleton as a pirate ship rises from the depths, or volcanic tremors threaten to blow out your speakers. It’s the kind of explosive scoring that’s determined to be part of the action, a go-for-broke thematic attitude that’s a big reason why films like Mysterious Island have stuck in our geek consciousness. Thankfully, Tribute has answered the call to put out Island in its entirety, and hearing it whole at over 65 minutes is a revelation.

The same can easily be said of Fahrenheit 451, a score both tragically romantic and darkly suspenseful. It was scored just after Hitchcock seemingly ruined his longtime composer’s career by firing him for not heeding his “pop” wishes on Torn Curtain. Perhaps that’s why Herrmann subconsciously filled Fahrenheit with a doomed, yearning feeling as personified by washes of lightly anguished strings and harps. You really feel the soul of a hopeless, doom-filled romantic here, let alone the hypnotic lull of a dystopia that’s banned the thought of reading in favor of mindless video soma. And the deceptively soothing performance of the Moscow Symphony truly brings out Fahrenheit’s soul, from its waltz-like love theme to subtly suspenseful string passages. It’s almost like hearing a spin on Psycho where no one happens to get stabbed. But that doesn’t stop Herrmann from his speedy “firetruck” theme, where xylophones and strings speedily play “firemen” hell-bent to burn books. And when they strike, Herrmann conveys an awful, sinking feeling, the sense of history and creativity being lost to the flames of future mediocrity.

Yet there’s also an inescapable hope to Fahrenheit 451’s music, especially in the gorgeously haunting music that accompanies its final scenes of “book people” as they wander around the countryside, reciting their text to a memory that will live in flesh instead of paper. While director Francois Truffaut would end up making a fairly antiseptic film from Ray Bradbury’s classic book (we can only hope that Frank Darabont gets to make his version), the new Tribute recording confirms that this version will truly live in our memories due more to Herrmann’s music than the imagery it accompanied, let alone the script. But still, there’s that amazing ending. And Herrmann’s unresolved chord over it is the equivalent of a big, white question mark flying at you from the screen – one of the cinema’s truly great scoring fade-outs.

With the prelude from King Of The Khyber Rifles accompanying Mysterious Island, and Herrmann’s beautifully nostalgic music for the Twilight Zone episode “Walking Distance” added to Fahrenheit 451, Anna Bonn, William Stromberg and John Morgan are to be congratulated for giving the maestro and the legions of filmmakers and fans he influenced their due. I had my scratchy vinyl album to discover Bernard Herrmann with. Now Tribute has given a new generation a CD that resonates with the beauty and power of the composer’s danse fantastique like never before.

Journey with your CD player to Mysterious Island, then burn it up with Fahrenheit 451 here.