(Click on the CD covers to purchase these soundtracks)

When the subject is comedy scoring, there’s a difference between being hip and going for the easy, smart-assed musical joke- particularly when it comes to the jazz score stylings of the 50’s, 60’s and 70’s. You can laugh at the fat brass licks and groovy orchestrations, or affectionately go with their flow. Today’s composers can figure it’s enough to get in a couple of mod saxes and strings to sell the idea with cute smugness, as if sounding retro was could create laughs for humor-starved films. Hey, it’s not as if hepcats from the good old days like Burt Bacharach didn’t know their stuff was kind of goofy already, especially when tunefully going over-the-top for spoofs like “What’s New Pussycat” and “Casino Royale.” But the fact is those composers always did it out of love, which made their scores work at the least. It’s this affection for the swinging jazz-orchestral form that energetically distinguishes the riff reference approach of “Tower Heist,” “Johnny English Reborn” and “Rum Diary,” two contemporary scores that outfit their characters with macho grooves- while the other is an actual period flick whose sessions are spot on for a soused reprobate in the early 60’s. 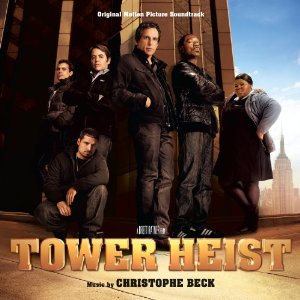 Brett Ratner might not have the best tastes in p.c.-friendly sound bytes, but he certainly can make fun movies like three “Rush Hour” pictures, let alone have the geek love to get a legit movie jazz master like Lalo Schifrin to score those Chan / Tucker buddy cop pairings. For whatever reason, Schifrin’s not among the crew of “Tower Heist,” a picture that stands at the height of Ratner’s multiplex-pleasing skills. But if you can’t get the old pro, then a relatively Young Turk like Christophe Beck will do nicely. Beyond being the king of Hollywood’s party down, rock-funk sound with the likes of “The Hangover,” “Hot Tub Time Machine” and “Due Date,” Beck has also proven his chops with such boisterously scheming jazz scores as “Two for the Money,” “Confidence” and “Red.”

“Tower Heist” shares their dangerously fun groove in spades. It’s main theme pretty much lays it all out- a mix of boastful brass, funk guitar and a stealth-action orchestra, topped off with glistening synth percussion that stands for the titular high-tech penthouse. It’s a sound of pure 70’s crime-jazz bliss, far more David Shire than Lalo Schifrin. Sure there’s the Bruce Lee-ready orchestral hits of “Enter the Dragon” that filled the “Rush Hour” flicks. But any listener with a remote passion for 70’s cult classics will immediately recognize the mean-ass, brass-funk rhythms that propelled “The Taking of Pelham One Two Three.” That militaristic sound is all over this “Heist.” Except in Beck’s hands, the music is far more homage than steal. 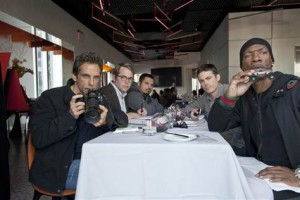 Not only does Beck expertly recreate the seminal rhythms that have influenced far more soundtracks than this one, but he goes further to inject a healthy dose of rhythmic humor into the escalating plans of slobs vs. snobs. Except in this case, it’s a group of refined condo servants brought to street level vengeance to take down a Madoff-esque villain- as abetted by Eddie Murphy jive funk. Beck’s score is all about their ‘tude, music that plays this hapless bunch of wannabe thieves like the Clooney gang they dream of being. Beck deftly balances this combo of danger and hustle, creating real danger for the climactic heist, but with enough humor to let us know no one’s really going to get hurt. The result is a deft jam session of symphonic weight and popping excitement, a theme-driven rush that turns the penthouse of all evil into a cool ride on the retro-jazz subway car to rule them all. 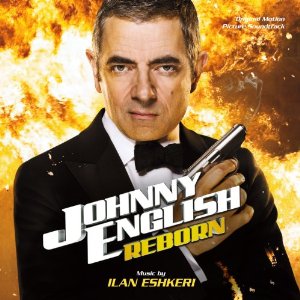 If “Tower Heist” does its all to pump up its frequently inept robbers into master criminals, then Ilan Eshkeri has the even mightier job of turning Rowan Atkinson’s catastrophically inept 007 wannabe into a super agent who’ll out-Bond Connery. Eshkeri outfits himself with the comedy secret agent score checklist of a swaggering main theme, trademarked fuzz guitar, rocking exotica for the luxurious locations he’ll fight through, and lush, John Barry-esque strings, for the sinister villains and lovemaking he’ll have to endure. It’s a jacket that’s been to the cleaners many times by now, no more so than by serious spy scores that have been furiously finding new ways to make use of the pop-orchestral template that was truly established in “From Russia With Love.” Sure Johnny English is “Reborn” in this manner for the zillionth time. But it’s all how you wear the tux, which Eshkeri does in smart style. 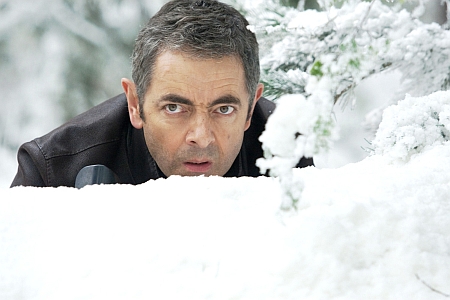 Thankfully, Eshkeri isn’t out to re-invent the musical wheel that composer Edward Shearmur established so well for the first “English.” Instead, he continues its throttling, accident-causing sound with just as much symphonically exciting flair. While this greatly pleasing sequel might be a bit smaller in scope than the original, there’s nothing about the score that would clue you into it, from the dynamic pan-Asian action of a “Rooftop Chase,” the jazzy, sensual cooing of “Hypnotification,” “Lipstick Gun”s insanely dangerous suspense or the choral resurrection of “Reborn,” Eshkeri’s music playfully pumps up the adrenalin throughout, making Atkinson very macho indeed, while also playing to his bumbling sweetness. If the first “English” was a hilarious riff on “Goldfinger”’s megalomania, then this sequel is a delicious spin on “License To Kill,” musically making things personal for a disgraced and on-the-lam Johnny. While necessarily light in tone during his desperate attempt to clear his name, Eshkeri actually manages to put in a bit of emotion along with the “this time it’s personal” danger, with punchy announcements for the bad guys that are just this side of being overtly comic. But if anything, it’s this one degree of separation that’s what separates a mock spy score from the real deal. A tilt either way could have ended up perfectly suited for a funny animal with a goofy gadget, or gone the way of Daniel Craig sporting a Walther PPK. In “Johnny English Reborn”’s case it’s the latter for this aardvark-ish agent 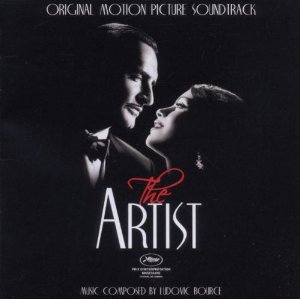 When it comes to talking about retro scores, you can’t go back any further then the days when there was no music at all – at least when it came to the complete lack of soundtrack on celluloid nitrate was all about the herky-jerky picture. Such were the glory days of silent movies, when music had to do all of the talking. Whether it was a pianist desperately improvising away, or a full orchestra keeping time with reams of rapidly changing melodies, the 1920’s were truly the time when film scoring was king. The fact that so little of these soundtracks survived to our digital era says much about the downfall of films whose acting, and scoring was overly dramatic to say the least- lest of all the tragic end that ensued for actors who were stopped deader than a 1929 stock certificate when their vocals didn’t cut the Vitaphone chops. 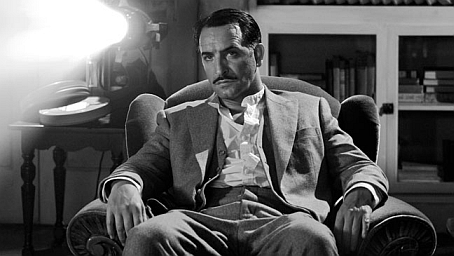 While such a fate befalls the Gallic voice, and career of “The Artist,” his musical mood’s far peppier in the hands of French composer Ludovic Bource. This soon-to-be known musician got his start creating the spot-on 007’isms of “Artist” creator Michel Hazanavicius’ two, brilliant “OSS 117” spy send-ups “Cairo, Nest of Spies” and “Lost in Rio,” (for which Bource also managed a brilliant Bernard Herrmann “North by Northwest” homage). Given the even more formidable task of going from spy spoof stylings to filling up an optical track that’s nearly devoid of sound effects (something even John Morris had in more abundance with his wondrous score for “Silent Movie”), Bource rises to “The Artist”’s challenge with melodic panache. 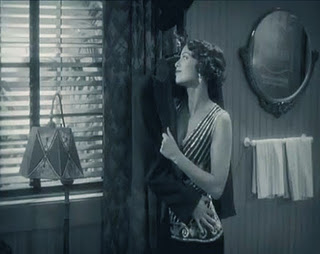 Given a heart-on-its sleeve film without a nasty bone in its black and white body, Bource pours on the charm in spades. Better yet, Hazanavicius has given the Hollywood-set “Artist” a distinctly French, emotion-based humor that’s far more relaxed than it is frenetic, allowing Bource to write a silent comedy soundtrack that doesn’t sound like he’s scoring a Keystone Cops cartoon (that one distinction goes to the fun, mock-peril of his accompaniment for the opening film-within-a-film “A Russian Affair”). “The Artist”’s other 23 tracks (spread over a copious 78 minutes) function more as mini-suites. And while it would have been nice if Bource had more thematic consistency to tie them together, “The Artist” is right in tune the emotional notes it seeks to hit. 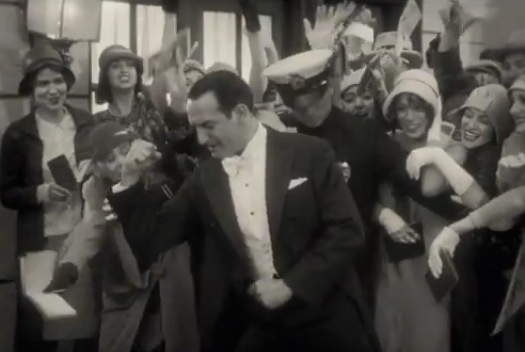 Set in the tuxedoed heyday when champagne and star-hungry crowds flowed, Bource starts “The Artist” with a bubbly jazz effervescence. Silent idol “George Valentin” gets a soft-shoe swagger, a sound perfectly in synch with the always-winning devil-may-care charisma of actor Jean Dujardin. The swinging spirits of Cole Porter, George Gershwin (and even a tropical Django Reindhardt) are palpable in the lush orchestra that captures Valentin’s seemingly never-ending life of leisure and adoration. Bource also manages clever, static-y recordings for the make-believe standards of “Imagination” and “Jubilee Stomp.” When it comes to the real period deal, a subtly futzed redo of the title tune from 1936’s “Pennies From Heaven” makes an apt choice for the only vocal song in “The Artist” as Valentin’s world comes to an end. 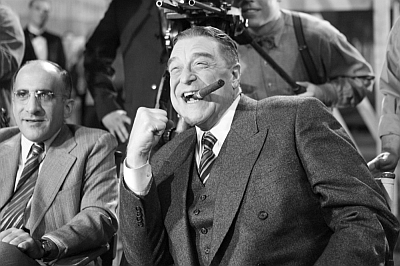 Valentin’s once lowly admirer and love object will become his guardian angel, taking “The Artist” on a trajectory somewhere between “A Star Is Born” and “Singing in the Rain.” It’s a somewhat romantically uncertain relationship that takes the film smack into the kind of near-tragic pathos that Charlie Chaplin mined so brilliantly, and Bource proves mostly adept at making the music simultaneously poignant and light-hearted. Tender pianos, subtly dramatic strings and intimate violins abet the film in creating real, feeling characters from its stylized approach, while also recalling such early film music masters as Erich Wolfgang Korngold and Miklos Rozsa.

It’s only the raging cues “L’Ombre Des Flammes” and “”Ghosts From the Past” are too self-consciously over-the-top (as are the film’s sequences themselves). Bource’s music goes from nicely matching the overall naturalism into the kind of gesticulating, silent movie hamminess that “The Artist” surprisingly avoids satirizing itself. Perhaps it’s this need for a more subtle approach to “The Artist”’s purposefully melodramatic finale that made Hazanavicius replace Bource’s own powerful “Suicide” cue with Herrmann’s famed “Scene d’Amour” from “Vertigo,” which to be fair is like having Mozart come in to do your big scene. And thankfully, Bource doesn’t have to compete with the maestro of dark romance on the album, allowing his own voice to shine for the cue’s suspenseful race against time to its happily predictable ending. 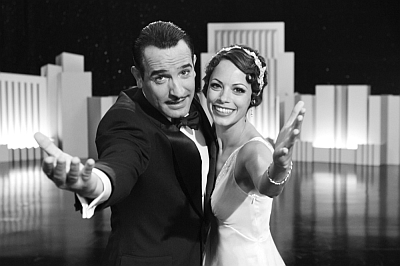 The same can be said for the overall, wondrous effect of Bource’s “Artist,” an appreciation enhanced when hearing this score fully free of picture. If there’s a triumph in his swooningly melodic, yet mostly unfussy work, it’s that Bource will lead your imagination straight back to the era that some say represent the halcyon days of Hollywood. The musical affection that makes “The Artist” a sweet movie-movie delight will likely make you agree with that opinion.