Of all the composers to emerge from Hans Zimmer’s musical castle, few have consistently shown a dexterity for fantasy scoring like Harry Gregson-Williams. Hitting the big leagues with such animated scores as ANTZ, THE TIGGER MOVIE and CHICKEN RUN before segueing to such live action genre wonderments as NARNIA and WOLVERINE (not to mention sword-heavy history like KINGDOM OF HEAVEN), Williams’ ability to give old-school orchestral melody a current rhythmic spin has given his work a voice amidst so many similarly-inflected scores.

Perhaps no realm has been better to Williams than the fractured fairy tale swamp inhabited by SHREK. Co-scoring the first movie with John Powell, then handling the next two installments on his own (including Shrek’s fun 4D ride), Williams has had an obvious blast satirizing fantasy scores in general, while still delivering their exciting goods- not to mention hitting the films’ constant parade of pop culture references (which truly reached annoying overload the last time out). Now for what’s allegedly the ogre’s final outing, Williams has delivered what might be his most captivating SHREK score of the bunch, by nature of its darkness. Here Shrek is thrust into a nightmare mirror universe due to his ill-advised, mid-life crisis wish to Rumpelstiltskin. And while there’s bright whimsy to go around by reveling in the bizarro takes on the beloved characters, Williams’ melodic approach also brings out no small amount of regretful poignancy and actual danger – a tone nicely befitting this spin on IT’S A WONDERFUL LIFE (or BACK TO THE FUTURE 2 if you’d like).

Part of any cartoon sequel’s comfort is a warm theme, and Harry Gregson-Williams has certainly amassed plenty for Shrek by this point. The difference is the sinister, ironic effect that Williams uses them for in AFTER, quickly going into a menacing downbeat after a statement of the trademarked Shrek melody. However, the biggest new one on the block belongs to Rumpelstiltskin, whom Williams paints as a little devil, complete with an old scratch fiddle (a demon’s favorite instrument for sure), cooing voices and maelifically plucky percussion. And while there’s still lots of jokey stuff to be had, from the Tchaikovsky-esque waltz of “Din Din!” to the giant Baroque ramp-up of “The Main Event” that lead’s to Puss’ Spanish guitar, a lot of SHREK FOREVER AFTER works because of its seriousness, if you would. The defiant “Ogre Resistance” sounds like it would befit a human one, while the sweet piano and voice of “Fiona Doesn’t Love Me” sounds like a real heart being broken. And when the jig is up for “Rumpel’s Defeat,” Williams drives the action with a truly strong theme, lush orchestral and choral music that brings home the bolder and bittersweet vision of this film’s score. Williams has delivered about as daring a soundtrack as you’re likely to hear for the SHREK franchise. I’m almost sad to see it “go” given the new, foreboding musical dimension that Williams’ has opened up for it, while never forgetting the sweet magic that got Shrek started in the first place. 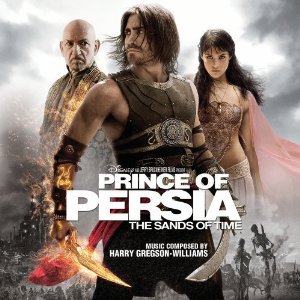 While SHREK FOREVER AFTER benefits from more of a traditionally clear-cut scoring approach, that kind of style has rarely been in the cards for producer Jerry Bruckheimer’s manic entertainments- of which PRINCE OF PERSIA is one of the more satisfying ones, a surprise given its videogame origins. Players will be pleased to see enough familiar roof-jumping, parapet-plummeting sword-twirling action to give their eyes carpal tunnel syndrome. So it’s a given that Williams would take a frenetic, ethnic-percussive approach right off the bat. Sure you can imagine trying to score this stuff in the fashion of the 1940’s Saturday morning serials that PERSIA is equally patterned after. But then, after delivering the rhythmic goods for Bruckheimer on the likes of THE ROCK, ARMAGEDDON and DÉJÀ VU, Williams definitely knows the preferred pulse to keeps this Arabic-style adrenalin hopping.

PRINCE OF PERSIA would be more than competent, if not exactly memorable if that was all there was to Williams’ score. But there’s more spice to it than that, from hugely lush orchestrations that conjure LAWRENCE OF ARABIA to a swooningly earnest romantic theme for the princess he’s bound to end up with. Though there might not be anything hugely new under the desert in PERSIA’s musical approach, it welcomely stands as the most thematic work that Williams has done in the Bruckheimer cannon, with a lightness far removed from the carnage his scores are usually called to unleash for them. There’s rollicking, SHREK-like excitement, with more adult stuff to be found in the rock guitar jams and Middle Eastern percussion.

But leave it to the super ninja Hassansins to truly kick up the film, and score a notch at the halfway mark. Bringing in a truly menacing mystical quality in a film that could have used a fly carpet or two, the Hassansins whip up evil sandstorms and a shipyard’s worth of metal weaponry, Williams accordingly beefs up his orchestrations and eerie samples, slamming in the suspense in a mad dervish of Arabic action- complete with vocal ululating and trusty regional instruments like the duduk. So by the time the full orchestra and chorus are clamoring over the mother of all hourglasses, Williams makes you feel the cosmos is at stake. Better yet, there’s actual melodic emotion that makes you care about whose fate is about to get reversed. Sure this might not be the kind of musical stuff that Douglas Fairbanks swung a scimitar to way back then. But for the multi-platform generation that’s likely PERSIA’s biggest audience, Harry Gregson-Williams’ groove will likely be game on.