When the cathode ray tube started beaming into America’s living rooms, some viewed it as the bastard stepchild to the big screen- particularly Hollywood, who hoped TV would die in its infancy, lest it one day kill its elder. But things have pretty much worked out in harmony over the ensuing six decades of pop culture, particularly for such composers as Jerry Goldsmith, Lalo Schifrin and Jerry Fielding, who energetically turned limited TV music budgets into bigscreen careers. Ditto today’s talented TV-to-film composers that have included Bear McCreary (BATTLESTAR GALACTICA), Michael Giacchino (LOST) and Chris Beck (BUFFY).

Because of their instant availability, TV themes from STAR TREK to GET SMART have equaled any movie melody’s popularity- giving rise to TV soundtracks that ranged from such shows as M SQUAD and THE MAN FROM U.N.C.L.E. to telefilms like SHOGUN and MARCO POLO. Now film score albums are being equaled, if not outdone by the recent slew of TV soundtrack releases. For Varese’s gigantic edition of Alex North’s SPARTACUS, there’s Film Score Monthly’s collector-priced round up of Dennis McCarthy’s music from STAR TREK- THE NEXT GENERATION (not to mention that label’s TV OMNIBUS compendium). Varese, FSM and Intrada are but the tip of the TV music iceberg covered in this capsule compilation of television music, whose albums runs the gamut from family-friendly grooves to pay TV’s notes of sexy aggression. 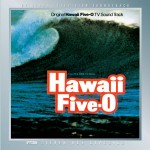 TV themes don’t get more brassily exciting than Morton Stevens’ big wave of rhythmic energy, which leads off FSM’s first-ever CD release of HAWAII FIVE-O’s 1969 album, But despite the show’s iconic ocean imagery, the sound here is purposefully more Vegas swing than exotic surf guitar (though the Ventures are on hand to provide spacey licks). That being said, drumming quickly gets across the tropical setting in “Call To Danger,” a tune quickly recognizable to old school TV junkies for its use an intro to CBS’ specials throughout the 1970’s. Stevens’ well-sequenced compilation offers dangerous bursts of cop-spy suspense jazz, lounge swing and psychedelic organ and guitar pads that make Jack Lord’s detective Steve McGarrett a lot musically hipper than my memory serves. Book ‘em, and buy this.

A STEP OUT OF LINE / THE BROTHERHOOD OF THE BELL Jerry Goldsmith was one of the few composers who was simultaneously prolific on the big and small screens, approaching both with equal quality. The first case in point for the year in which Goldsmith also got an Oscar nomination for PATTON is 1971’s A STEP OUT OF LINE, a TV flick in which Peter Falk and pals rip off a bank. Driven by a beautiful, breezy theme, LINE brings on a suspense is alternately playful and dead seriousness, complete with all the trimmings of a sad sack sax, pianos and menacing strings- a conglomeration of noir stylings that in it’s way prefigures Goldsmith’s classic 70’s gumshoe score for CHINATOWN. The composer’s fans will quickly recognize the sinister, violin-based beginnings of THE MEPHISTO WALTZ within THE BROTHERHOOD OF THE BELL, in which a cult-like secret society tries to ring Glenn Ford’s lights out. Eerie string effects, Baroque music and sinister jazz make the BROTHERHOOD’s threat as contemporary as it is classical in its conspiratorial scope. BELL is a particularly elegant, and striking entry into a chilling resume whose ranks also include MAGIC and ALIEN, making Intrada’s release an excellent two-fer that stands as a major revelation in the Goldsmith’s always-impactful body of work. Before Alan Silvestri was truly scoring such men of movie action as Michael Douglas and Arnold Schwarzenegger (not to mention Michael J. Fox), his beat was motoring down the jiving highways of southern California with Erik Estrada and Larry Wilcox. Under the guises of officers Jon Baker and Francis Llewellyn “Ponch” Poncherello, these easy riding dudes were the ultimate Macking motorcycle cops, especially with Silvestri’s energetic beats playing all of the fun and sun or catching the bad guys. It’s gloriously swaggering stuff that positively swims in Silvestri’s origins as a Vegas musician. And while nothing here particularly plays action (excepting one bit involving a shark), this dynamic collection of orchestral funk more than shows Silvestri’s talent for exciting chases- even if his Tony Manero-ready rhythms would have almost no relation to the bigscreen sound that Silvestri developed after he finally hit it Hollywood big with ROMANCING THE STONE. Now after releasing two previous CHiPs compilations, FSM pours on the funk for nearly80 minutes of polyester TV cop stylings at their finest, music that almost makes you want to get pulled over by cops on their way to dance floor. 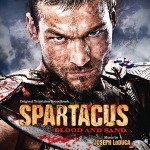 Don’t expect the moderately tasteful strains that Alex North provided for the legendary gladiator of that vaunted 1960 movie, as this Showtime spin on SPARTACUS is all about gore n’ sex attitude, with a look and sound deliberately keyed off 300. And there’s no composer better suited to kicking ass in this stylized arena than Joe LoDuca, who’s long shown a thing for mythic heroes with his TV scores for HERCULES and XENA. Like 300, Lo Duca turns the gut-splattered ring into a world music mosh pit, filled with tribal percussion, hollering rock guitars and eerie vocal cries. That being said, it doesn’t take long for Lo Duca to make SPARTACUS his own musical animal, pumping up the epic-sounding steroids, while not forgetting the emotional orchestral heart that drives its good guy to unspeakable moments of triumph. Like the best anachronistic soundtracks, LoDuca throws the listener into a brash, intoxicating world that captures the savage times, while also making them melodically relevant for a cable audience that’s far more Roman than Thracian in their taste for thrills- which LoDuca’s near-experimental music approach brings on with his most interesting, barbaric voice yet. 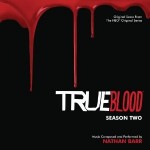 Nathan Barr is down on the bayou once again, along with Sookie Stackhouse and her undead blood-and-sex loving company. If a Cajun has a way with a fiddle, then the same thing can be said with Barr’s skill for using a cello’s most erotic, and spine-tingling vibrations to convey this bog’s carnal mysteries, especially as it applies to vampires and their groupies who make it anything but hallowed swamp ground. Sinister and haunting melodies prowl about this second season, with yearning instruments and Lisbeth Scott’s voice once providing a deceptively rustic siren song. For when love bites here, it’s with a mix of tenderness and lust, as Barr’s tingling, sometimes distorted chords reach for the kind of animal instinct that’s made this series so popular for vampire fans and the just plain kinky- even if this compilation seems to have a more beautifully mellow quality to it this time out.

PILLARS OF THE EARTH 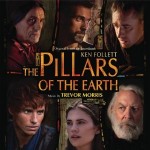 Trevor Morris certainly has a thing for Olde England, as can be evidenced by how he turned the machinations around Henry VIII’s rule into the subtle, almost serpentine music that filled the entire run of Showtime’s THE TUDORS. Now Morris proves he literally has even bigger symphonic stones to take on their miniseries for THE PILLARS OF THE EARTH. There’s far more KINGDOM OF HEAVEN than TUDORS in Morris’ approach, as he unleashes a rousing sound for depicting religion as a world-changing force in the city of Kingsbridge. Morris isn’t so much dancing with architecture as going into battle with it, with dark, pounding melodies, lush, choral spirituality, growing rhythms and an updated sound for the land’s ancient instruments that often feels better suited for constructing a Catholic battleship than a 12th century cathedral. In Morris’ case, these PILLARS make for one of the few musical cases where bigger really is better when it comes to showing off a composer’s epic, and even more interesting abilities.