Of all the great, Gothic love affairs that have been artistically going on in the cinema, easily the most enjoyable, and enduring partnership belongs to composer Danny Elfman and filmmaker Tim Burton. Birds of a bizarre feather from Elfman’s joyously demonic rock band Oingo Boingo to Burton’s twisted scribblings for Disney, it was fate that these kindred, oddball spirits would immediately hit it off from the clown hell that tormented “Pee Wee Herman’s Big Adventure” in 1985. The Burton / Elfman circus of audio-visual horrors that would mostly grow increasingly frenetic through the likes of “Beetlejuice,” “”Batman Returns,” “Mars Attacks,” “Sleepy Hollow” and “The Nightmare Before Christmas.” With nearly every genre collaboration over the last 27 years going further and further into the deep end, it comes as the biggest shock as to just how drolly restrained (relatively speaking) that their newest macabre jaunt is for “Dark Shadows.” It’s a film of many surprisingly genteel pleasures, at least until its finally goes haywire- not that Elfman himself gets dragged down into an abyss of bad storytelling and overt effects that leaps out of nowhere to prevent this from being one of the most breezily pleasurable Burton film since “Beetlejuice.” 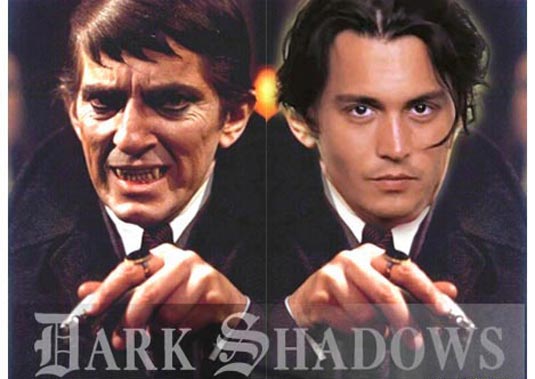 Inspired by the cult TV soap opera that no doubt played a major part in twisting Burton’s young imagination, the original “Dark Shadows” wasn’t so much about horror as romance, a gauche love affair with the uncanny that would truly become popular when it embodied its uncannily florid yearning into the sympathetically undead vampire Barnabas Collins. Now given a production of several zillion dollars and Johnny Depp-led star appeal that the technically plagued original could only dream of, Tim Burton further undermines this bigscreen adaptation’s potential hamminess (especially the screwball comedy promised by the somewhat misleading trailer) by playing it straight, if not underplaying the premise. But that certainly doesn’t mean there aren’t many subtly goofy pleasures to be had here, especially in Danny Elfman’s subtly eye-winking score, a relatively uncomplicated treat in the composer’s rhythmically intensive cannon of musical ghoulishness. 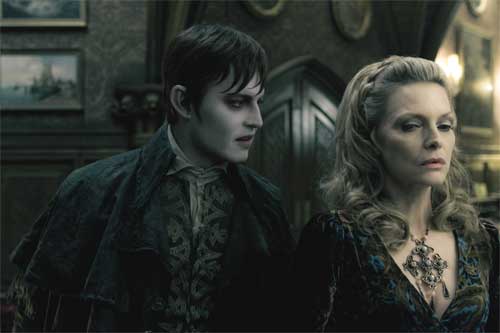 A good deal of Elfman’s devilish, trademarked suspects are assembled in “Dark Shadows” to be sure- a dramatically swirling orchestra, organ and chorus among them. And while the “Prologue” gets things off to a tempestuous bang, the kind of raging orchestrations that Elfman’s given to headless horseman, supervillain circuses, or cemetary-dwelling freaks doesn’t really hit until the uncertain climax demands it. Instead, Elfman’s work here is mostly about filling up the vast, centuries-old halls of Collinwood manor in a way not that dissimilar from what Robert Colbert did on ABC daytime, conjuring a fog of strings, cheesy electronics and haunting melodies that are a whole lot more playfully self-conscious this time around. “Deadly Handshake” and “Barnabas Comes Home” are marvels of eerie atmosphere with mock-menacing strings, echoing motifs and tubular bell percussion, a spider-web of musical effects that go bump in the night amidst Rick Heinrich’s impeccable set design, while deliciously conjuring something far more cheaper. Theremin-like pulsations of “Hypno Music” positively threatening to crumble a set that might as well be made out of plaster of Paris. Like this cue, there’s a charming kitsch quality to much of “Dark Shadows” musical miasmas that essentially make this into the score for “Ed Wood” that Elfman never got to do. 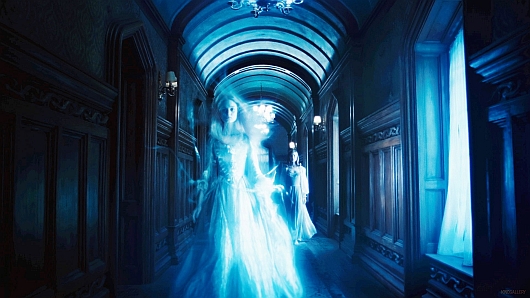 What remains completely heartfelt about the score, and a big reason for its success is Elfman’s innate feeling for the lethal outcast. Whether it’s Edward Scissorhands or Hellboy, there’s a melodic tenderness to Elfman’s horror scoring that always makes us sympathize with the freakish, while never letting us forget that the personable “monster” could puncture our throats at any moment. Barnabas Collins is particularly fine company for the composer in that regard, a blood-sucking fish out of water whose biggest distaste is for his own cursed actions. Elfman is as lovestruck for him as Bella is for Edward, the composer giving passionate, if foreboding attraction to a figure whose white-face makeup and flowery dialogue would be completely absurd outside of any other actor, or director’s domain. And when “Dark Shadows” tries to play it for as much real emotion as it will ever carry with “Roger Departs,” Elfman’s theme for Barnabas as father figure is downright noble. This guy is no Dracula, yet all the serious appeal of the vampire myth that he embodies (and was arguably made popular again in the original form of Jonathan Frid) can be found within Elfman’s score between the gently satirical lines. 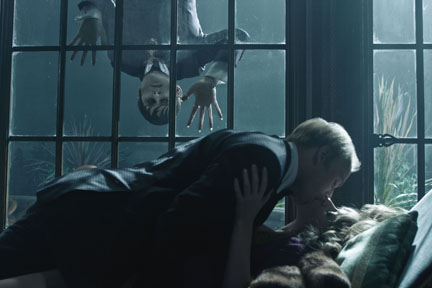 If Barnabas feels positively old at being serenaded by Alice Cooper, Elfman compounds the musical anachronisms way beyond B-movie / soap opera electronics. Even if “Shadows- Reprise” bursts out with a hilarious retro scream before jamming with electric propulsiveness that’s far more “Batman Begins” than “Batman.” When the kitchen sink special effects arrive to dispel the Baroque drollness that really makes most of “Dark Shadows” work beyond your wildest hopes, Elfman still remains on keel from “The Angry Mob” onward by mixing the throwback keyboards with swells of synth modernism. Much like the Wolfman he scored with far more seriousness, Elfman rips apart his elegant clothes and reverts to raging orchestral form for the overly big finale as he’s called upon to deliver the thundering goods, which he does in thematically operatic style for a potpourri of angry ghosts, animated wooden figures and a witch-bitch’s fiery vengeance. You might be gasping as to what the hell’s happening on screen. Yet Elfman’s thunderous, but still-romantic music maintains fine storytelling form as its throttling momentum turns Barnabas from silent observer to the absurd visuals into super-heroic do-gooder, racing to the rescue with choral and symphonic aplomb for “Widow’s Hill- Finale” and “The End?” – a true Batman, in deed and music. 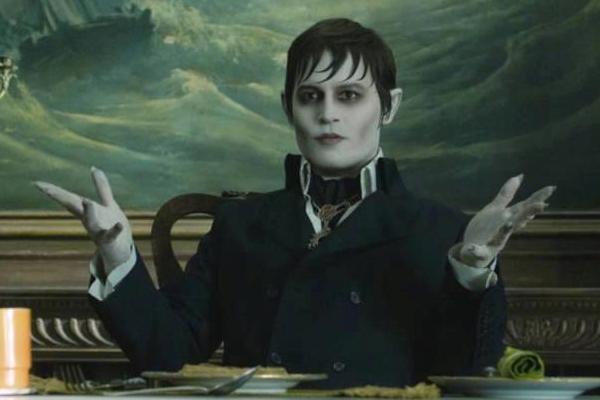 But while “Dark Shadows’ might tragically falter from becoming a Tim Burton classic to ending up an admirable miss, Danny Elfman’s score shines as another subversive gem, added to a treasure chest that helped make him into the gonzo Prince of musical darkness. It’s work that’s all the more admirable when the spooky-ooky ride gets bumpy, let alone for turning a project’s inherent goofiness from the get-out into a thing of true endearment and supernatural power.

Make your home at Elfmanwood HERE 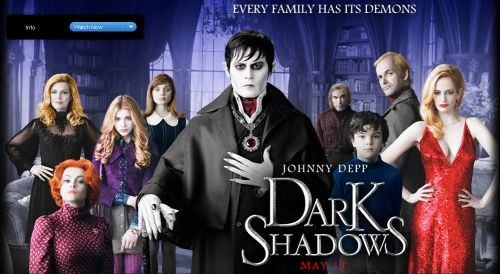