Ever so quietly, the Vienna Symphonic Library breaks ground – again. 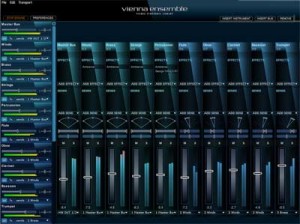 Quietly on the Vienna Symphonic Library forum, came two major announcements: the upgrading of the Vienna Ensemble virtual mixing board to run other third party virtual instruments, and the release of the new Vienna Effects Suite, both usable on either Mac and PC.
Say goodbye to audio cards on farm machines
Until now, only owners of Vienna Instruments packages could make use of the Vienna Symphonic Library’s Vienna Ensemble virtual mixing board which enables Vienna customers to flow both audio and MIDI data across LAN lines between systems. But that’s about to change. While no date has been announced, the company stated on their web site that the Vienna Ensemble Virtual Mixing Board is being updated to handle VSTi’s (virtual instruments) from other companies. This enables composers to run Vienna Instruments along side other programs from EastWest, Kontakt and others in a single virtual rack across both Mac and PC platforms, now opening to many composers, especially those working on the Mac, what FX-Teleport originally offered to PC/Giga users.
So sometime In 2009,  a music production studio using the Vienna Ensemble update, will only need the sequencing computer to have an audio card. All other computers in the studio will connect to the main DAW using LAN cables that can be bought at Staples or Office Depot. No plans were announced to support Gigastudio which was discontinued by Tascam mid-2008.
The New Vienna Effects Suite 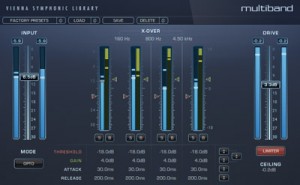 Priced at 395 Euros is the new, downloadable, dual platform (Mac/PC) eight-plugins Vienna Effects Suite with a bonus jazz drum set if ordered before January 15, 2009. The 64-bit Vienna Suite includes Equalizer, Master Equalizer, Limiter, Compressor, Multiband Limiter, PowerPan, Exciter and Analyzer. A reverb will be added in early 2009. The Vienna Effects Suite allows for three installs. You can download a 30-day trial version, but to use it, a Vienna Key (USB copy protection key from Synchrosoft) is required. Vienna’s Martin Saleteg is the main developer behind the Suite. For continued updates, watch the VSL Forums.