If there’s anything that’s particularly welcome about the ongoing laser beam-like disintegration of physical CD’s, it’s that major, and indie studios are rapidly allowing some of their most beloved, and wanted cult scores to be made available to soundtrack collectors- perhaps the one niche of that will keep their tangible discs alive longer than other group of music consumers. It’s a given that so many score geeks also happen to be sci-fi fans, which makes the start of 2011 an undoubted big bang for them with the infinitely long-awaited releases of the soundtracks to 1964’s ROBINSON CRUSOE ON MARS and 1989’s SLIPSTREAM, two pictures whose cult following is as much due to their scores by Nathan Van Cleave and Elmer Bernstein as it is about the films’ awe-inducing sci-fi worldviews, whether they’re playing the future rapture of the red planet or the plane-filled skies of Earth. 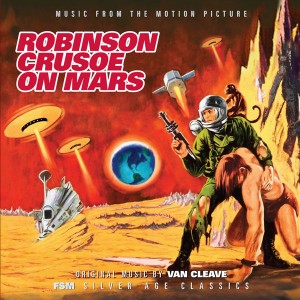 If George Pal most popularly prophesized the space race with the Oscar-winning special effects of 1950’s DESTINATION MOON, Hollywood had come an even longer way when it came to the screen “realism” of ROBINSON CRUSOE’s trip to Mars. Cleverly written by THE ANGRY RED PLANET’s Ib Melchior, MARS took special pains to inject plausible science into its hapless astronaut’s trek across the globe’s daunting terrain. The film’s mix of technical jargon, God-fearing emotion, a cute monkey and alien machines barely recycled from WAR OF THE WORLDS likely led many people to mistake it as a George Pal production. And that’s certainly the best kind of backhanded compliment that can be given to this Saturday TV viewing favorite, as CRUSOE (directed by no one less than WARS’ Byron Haskin) embodied the best attributes of the Pal brand, including the kind of brassy orchestral strains and eerie suspense which Leith Steven wrote in spades for his scores to WAR OF THE WORLDS and WHEN WORLDS COLLIDE.

However, that rousing style here is played by Steven’s orchestrator Nathan Van Cleave (credited as “Van Cleave”), who just happened to score Pal’s MOON follow-up CONQUEST OF SPACE. In fact, the composer who also worked on WHITE CHRISTMAS pretty much had unearthly music in his creative blood with such credits as SPACE CHILDREN, DESTINATION SPACE, episodes of the TWILIGHT ZONE and the great, unsung sci-fi spin on Frankenstein called THE COLOSSUS OF NEW YORK. But it’s ROBINSON CRUSOE ON MARS (with substantial contributions by classic TREK scorer Fred Steiner) that is Cleave’s masterwork, especially because it sounds so rousingly human, conveying both the film’s visual majesty and the Herculean fight for survival of the marooned Commander “Kit Draper (Paul Mantee). Patriotic horns signal the astronaut’s American know-how, particularly against the rugged symphonic terrain, at first given a haunting, electric organ theme that conveys period sci-fi as quickly a the sight of a bug-eyed monster.

Cleave’s other major melody speaks for the valiant, never-say-die attitude that keeps Draper going against his own ennui, much like Daniel DeFoe’s castaway that he ironically compares himself to. When he looks above, the stars take on a motif for glistening percussion and strings, one of the many, quickly identifiable melodies that always seem to lie beyond the next Martian valley Draper has to silently slog through, Van Cleave impressively connotes an environment as forbiddingly harsh as it is impressive, the kind of place that brings the out the best in a hero, even as his doubt (not to mention lava and aliens) threaten to do him in.

Where Pal’s films had famed dialogue that mixed technical jargon with an ultimate belief in the almighty, Van Cleave has far bigger spaces to fill in ROBINSON CRUSOE. With Draper humorously talking to himself, or not saying anything at all while plodding across Mars’ substitute Death Valley, Van Cleave provides atmosphere as thick as any far-flung world. Powerfully developing his main themes between spectacle and pleading humanity, CRUSOE has an undeniable wallop that’s as much about spectacle as it is about the outward sci-fi stuff. While there’s some nice bits of unexpected jazziness to the sound, as well as playful pizzicatos for Mona the Wooley Monkey, Van Cleave’s rousingly melodic score packs such a wallop because it comes down to the human need to connect, whether it’s with a little simian, or an alien slave Man Friday- emotion that has a rich, often humorous warmth to it. Sure ROBINSON CRUSOE might not be as highfalutin’ as the sci-fi game changer that came out four years later. But in every way, it’s every bit as much of an odyssey- just a little bit silly in that 50’s / 60’s way, but one with a true visual and emotional wallop that’s made CRUSOE a long-cherished genre favorite.

While you can pick up the film itself on masterful Criterion blu, Film Score Monthly’s release is every bit the event fans had long-hoped for, with excellent sound and terrific liner notes by Randall D. Larson, the number one writer when it comes to classic genre scores. Heck, you even get space jazz source and Draper’s bagpipe spin on “Dixie” to boot in an album that finally shows Van Cleave off as one of the unsung sci-fi scoring giants. So how about COLOSSUS OF NEW YORK FSM (let alone a dvd release of the film itself)? 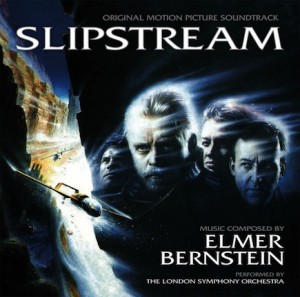 Given Elmer Bernstein’s early sci-fi forays with ROBOT MONSTER and CAT WOMEN OF THE MOON, it seems miraculous that this budding NYC composer could ever live these credits down. Thankfully, there were scores ahead like THE SWEET SMELL OF SUCCESS and THE TEN COMMANDMENTS to make fans almost forget about these titles (as if MSK3000 ever would). Just as comedy created a latter career renaissance for Bernstein with ANIMAL HOUSE and AIRPLANE!, science fiction films would also re-energize Bernstein’s work, from the killer robot beat of SATURN 3 to the manly adventure of SPACE HUNTER and the soaring femme barbarian glory of HEAVY METAL. If giving musical wings to a cult cartoon was arguably Bernstein’s greatest genre flight of fantasy, the wind-swept strains he’d lift 1989’s SLIPSTREAM with are of similar note, if pretty much unknown to the general public- ironic given that this was the second big budget failure for director Steve Lisberger, who nonetheless had a fan base from 1982’s TRON that was strong enough to get a smash follow up made nearly thirty years after the fact.

Consider me guilty as well, as I barely remember watching this post-natural holocaust movie wherein Mark Hamill chased Bill Paxton and the noble android Bob Peck about in bizarre planes. Yet among Bernstein’s hardcore fans, SLIPSTREAM seemed to remain the composer’s most-requested album- second only a full CD of his HEAVY METAL score. Where FSM finally released that album, Perseverance can be credited for finally revealing Bernstein’s wings of glory with worthy sound and packaging (again featuring definitely liner notes by Larson). This just might be the “get” for a label whose releases have centered on such esoteric scores as THE RUNESTONE and DEATH WARRANT, the true, long-treasured gem in their eccentric 80s’s genre picture crown.

If anything, 1989’s SLIPSTREAM is score that occupies a unique Bernstein space between the intimate lyricism of MY LEFT FOOT (done the same year) with the driving, western-styled round-ups of THE MAGNIFICENT SEVEN. You can almost hear the boisterous cowboy music ride in during “The Prologue and Pursuit” before siren-like female voices enchant with “Dreams.” “Lost Android” has a hoof-beat humor, while “Travel to Dance” could be the beautiful reveal of a bucolic range. But where Bernstein used this kind of symphonic majesty in the service of HEAVY METAL’s wonderfully juvenile blood and thunder, the off-kilter, post disaster setting of SLIPSTREAM allows the composer to engage in real moments of back-to-nature, post-disaster poetry, from the tender pianos of “Avatar” to the poignant flute of “Android Love.” Yet the crazed discordance of “Sacrifice” certainly suggests one befitting Stravinsky’s “The Rites of Spring.”

Wafting through it all is Bernstein’s beloved Ondes Martenot, another Theremin evoker whose electronic voices seemed to accompany just about every score he did post-1980, sometimes to their distraction. But where the sound may have been more than off-putting with Bo Derek’s bump-and-grind in BOLERO, the otherworldly Ondes certainly befitted scores like GHOSTBUSTERS and THE BLACK CAULDRON. And SLIPSTREAM just might be the best, and most befitting use of it, the synthetic voice becoming the near-supernatural winds of the future, its currents propelling all of manner of weird, eye-catching aircraft, while suggesting the spirit of its mechanical man.

If there’s reason to rejoice over this long-thought impossible release of SLIPSTREAM, then it can be heard in the final twelve-minute cue “Revenge and Resolution.” After weird, ooo-wee-ooo action music that plays like a showdown between two alien cowboys, Bernstein’s glorious symphonic winds come in for a thrilling, synth-sting ride into the sunset. Or in this case, a thundering trip through all manner of colorful balloons that seem like a Miyazaki cartoon come to life. It’s gorgeous melody that’s all about the crescendoing power of “science fiction” music to instill glory into the improbable, signaling that the full majesty of Bernstein’s future’s past has finally arrived in style, exactly the way Elmer imagined it would two decades ago.