Appearing with slightly more regularity than the latest J.D. Salinger novel, David Schecter and Kathleen Mayne’s Monstrous Movie Music label would achieve the same kind of reverential anticipation from soundtrack fans. Becoming a gold standard for archival genre soundtracks. MMM’s titles resounded with impressive production value, Schecter’s humorously minutiae -filled liner notes, and the kind of pure, geek dedication to unearthing the music of many a creature-feature filled childhood. At first doing spot-on re-recordings of such classic 50’s / 60’s horror / sci-fi scores as “Them,” “The Mole People,” “This Island Earth” and “The Beast from 20,000 Fathoms,” MMM then moved on to concentrate on actual recordings like “The Blob,” “It! The Terror From Beyond Space,” “Project Moonbase,” and “The Intruder.”

The latter stood out for being the first non-genre title in MMM’s catalogue, even if you could’ve easily mistaken Herman Stein’s music for being about a creature rampaging about the south, as opposed to William Shatner’s even more terrifyingly human race-baiting monster. “The Intruder” was an effective, one could say even daring, step outside of MMM’s comfort zone that opened up new avenues of dramatic music for its genre acolytes to discover. And now that MMM’s release seem to be appearing at an astonishing few titles at once per year, 2012’s bunch offers even more unexpected titles, of course with the horror-host worthy soundtracks that are the company’s bread and butter. 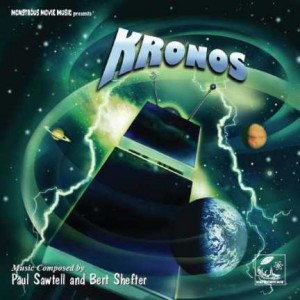 Old sci-fi scores seldom were known for their subtlety. And the most berserk were so densely packed with frenzied movement that it was easy to understand how scientists were driven mad by it. To that end, the most hardcore of the ultra-busy, ominously eerie school of creature feature scoring goes to the MMM’s two-for-one release of Paul Sawtelle and Bert Shefter’s music from 1957’s “Kronos” and 1959’s “The Cosmic Man.”

“Kronos” is easily the most unique of the portentous pair, given its villain was a giant, energy-consuming robot from outer space, one of the most striking monsters to grace a 50’s movie (especially as captured with traditional animation). And what threat from beyond the stars wouldn’t be played without the ooo-weee-ooo of the electric violin- which could easily be mistaken for the Theremin, an unearthly sound-wave instrument that Kronos might mistake for a far smaller ex-wife. While it’s far more motivic than thematic, what’s so clever about this blaring stuff is how the composers’ use of percussion approximates Morse Code, as crackled between Kronos’ two massive antennae. But the dominant message amidst the chattering instrumentation is one of absolute, end-of-the-world-if-we-don’t-stop-it panic. For stomping throughout the score are huge blasts of lurching brass, a very effective musical embodiment for a giant, city-stomping machine as it advances with slow relentlessness.

It’s the kind of towering, unstoppable musical presence that would make Vejur run it terror, let alone those brave military men whose patriotic brass is positively dwarfed in comparison. There’s no moment to rest for them, let alone the listener in this hellzapoppin’ race between machine and man. For those aware of Sawtell and Shefter’s numerous scores, “Kronos” is all the more delicious fun for presaging the duo’s apocalyptic thrills for the Seaview’s battle against the Van Allen Radiation Belt in the theatrical “Voyage to the Bottom of the Sea.” It’s a pure, frenetically mammoth wall sound, done very well here on a shoestring budget, that makes “Kronos” the most old-school monster mash fun of this batch of MMM releases, with extra points for its cosmically inspiring cover art by Vincent Di Fate. 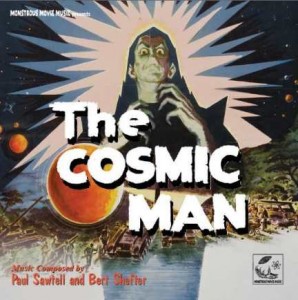 Next accompanying a galactic visitor with far nicer than Kronos, Sawtell and Shefter resultingly are far less musically busy when capturing “The Cosmic Man.” With John Carradine stepping into Michael Rennie’s space shoes for this low-fi spin on “The Day the Earth Stood Still,” the composers react to a far more imposing actor from the naturally frightened viewpoint of the military. So don’t expect Bernard Herrmann’s god-like walls of organ and orchestra from the composers here (especially due to the budget again), but eerily apprehensive melodies that do little to convince us of this E.T.’s peaceful intentions. The electric violin is even more unsettling amidst this nicely restrained, atmospheric score that’s all about the trembling fear of the unknown. With man doing what it always does best for the climax, Sawtell and Shefter’s hushed approach rings out with touching sadness, creating a noble ode for “The Cosmic Man,” as well as the bittersweet ode to a human race that just never seemed to get it when a space visitor was bearing an olive branch instead of a ray beam. 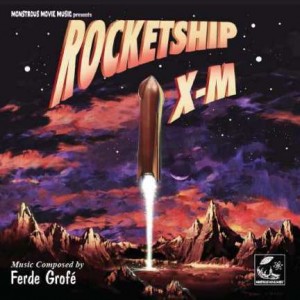 Intrepid Earth beings would get theirs upon visiting another planet in 1950’s “Rocketship X-M.” Along with “Destination Moon,” “Rocketship” was one of the pioneering sci-fi movies, whose phallic spacecraft ended up landing on a mutant-infested Mars, as opposed to the dusty Moon- a predicament that not even manly X-M captain Lloyd Bridges could beat. Where MMM has helped bring to light such composers as Sawtell and Shefter, the real discovery of this space voyage is its rousing score by Ferde Grofe. With precious few composing credits to his name (Grofe’s biggest hit would be the song “Wonderful One”), “Rocketship X-M” reveals a soundscape that’s surprisingly beautiful for the genre scores of the period. Having written a classical suite for The Grand Canyon, Grofe imagines Mars with the same kind of vast, romantic poetry (with even the playful addition of “Jingle Bells”), at least until Martian mutants imposingly show up.

Grofe’s music achieves that rare genre grail of having “a sense of wonder” bringing to mind John Williams’ work for “Lost in Space” as Mars is unraveled with awe-inspiring themes. The real deal Theremin is along for the ride, with its airwaves milked for all of their weird, pulsating exoticism here. It just might be the instrument’s most dexterous use outside of (and before) “The Day the Earth Stood Still,” especially when combined with an organ at its most unearthly reaches. There’s a soaring, sci-fi magic that fills “Rocketship X-M,” even during the earliest days of the movie music space program. It figures that MMM would be the label to dust off this striking score, with Vincent Di Fate once again providing enticingly stellar cover art. 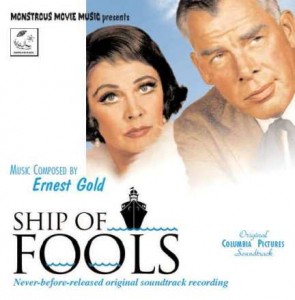 Where “The Intruder” was directly in the ballpark with having something to do with monstrousness, 1965’s “Ship of Fools” seems the first real non-creature leap that MMM has taken with an older release- unless you realize that said German freighter is steaming directly into the opening jaws of Hitler’s machine. Though bringing together another first class collection of performers, “Ship” was just about the greatest way starboard that director Stanley Kramer could get from his last such star opus “It’s A Mad Mad Mad Mad World,” but not so far apace from the heavy duty, conscience stricken characters of “Judgment At Nuremberg.”

Here the rogues gallery is assembled on The Vera for an unpleasurable cruise from Mexico to Germany, circa 1933, with class (and diner table distinctions) quickly separating the Nazi wannabes from the undesirables. “Ship” is a slow-moving, If effective soap opera that gives Kramer’s dexterous composing partner Ernest Gold a chance to show his formidable talents, flawlessly segueing from “Mad”’s merry-go-round broke down music to “Fool”’s powerhouse dramatics. His throttling “Main Title” mixes an ironic orchestra with brassy Latin rhythms and swooning strings, as if the whole thing was going into a chorus of “I Want to Be in America.” Gold’s beautiful, soulful theme conveys the tragedy of pathetic has-beens on the way to the future slaughterhouse, whether it’s forlornly looking in a mirror, bidding a fateful goodbye, and even getting in a bit of welcome absurdity as a woozy mental breakdown kicks in with the “Charleston For Fools.”

“Ship” is remarkable score, and remarkably brief at that. Scantly spotted into the film, “Ship of Fools” would certainly have benefited from more Gold instrumentals. But that being said, the Viennese composer was likely in seventh heaven with the surfeit of source cues that comprises most of this soundtrack. If you’re in the mood for Viennese waltzes, tangos, string quartets and a Germanic marching band heralding a fateful series of de-embarkations, then this album is a first class ticket. While score fans might be asking where’s the Gold, his precious few cues here are great enough to warrant a purchase from diehards. The rest is lilting dinner music, a cheerful Greek chorus that counterpoints the kind of culturally pontificating Captain’s table conversations that won’t be nearly as civil in a few years’ time. 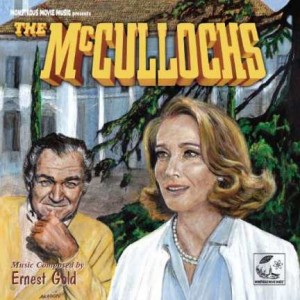 A paucity of Gold certainly isn’t a problem in “The McCullochs,” though any genre connection certainly is, unless the thought of getting a beatdown by a Beverly Hillbilly keeps you up at night. Max Baer Jr. (aka Jethro) made his 1975 directorial debut, as well as acted in this hard drinking, hard brawling Texas family tale, set circa 1949. Given the Big Country style main theme that gets this thoroughly enjoyable soundtrack off to with a bang, you might think this is a sturdy western score, until the big band 1940’s radio source kicks in for a bit.

Like the kind of brawling folk they grow in Texas, Gold’s rousing music doesn’t keep much emotion close to the vest. Instead, it’s all get-out for a brightly rousing, purposefully old-fashioned orchestral hoedown with a surfeit of melody and heart. Sure these macho men might be driving trucks, but Gold plays them with the dramatic sweep of “Giant.” “I Love You” gets said with a harmonica and guitar that’d be right home on the range, while time passes with a Korean war military march. Violins say sweet nothings, and the big musical fight at the end that pits F-Troop’s Forrest Tucker against a former Bodine is played with music that crosses a joyful, Irish jig that’d befit the haymaker climax of “The Quiet Man,” all with beer drinking bell and peeing percussion. The source cues on “The McCullochs” are understandably more varied then “Ship of Fools” as well, with a guitar hayride, an organ church service, some righteous 50’s-style blues and, of course, a hilariously awful marching band version of “The Eyes of Texas.”

Given how positively un-horrific “The McCullochs” is, it’s understandable that you can barely make out the words “Monstrous Movie Music” on Robert Aragorn’s painted album cover, which puts the spotlight squarely on a lustrous Julie Adams. Sure MMM put out the music for her hit movie “The Creature From the Black Lagoon” a while ago. And precious few releases later, their release of the sweetly entertaining score to “The McCulloch”’s says just how more encompassing MMM ambitions have gotten, all while still keeping their core audience. It’s a balance that I sincerely hope there’ll be more of as the label continues to dig up these soundtracks chestnuts, monsters or not.