For Greater Glory: The True Story of Cristiada

In an age when so many hypercritical film music fans rant about how every movie score sounds exactly the same, it’s to a composer’s credit if they have a musical signature that makes them stand out from the pack. But then, said golden age soundtrack devotees who are often the people mouthing these crotchety good old days generalities could easily say the same thing about their idols in a time when one could have easily interchanged the undeniably brilliant work of Erich Wolfgang Korngold with Max Steiner, or Dmitri Tiomkin with Victor Young for that matter. But there was certainly no misidentifying the music that Bernard Herrmann or Mikos Rozsa wrote during those formative era, let alone what people like Jerry Goldsmith and Elmer Bernstein wrote a few decades later when the studio system’s walls came tumbling down. For if anything, this “silver” age of film scoring went from dollops of operatic orchestras to a whole,
newly distinctive arena of progressive music that very much had a stylistically artistic stamp on it. 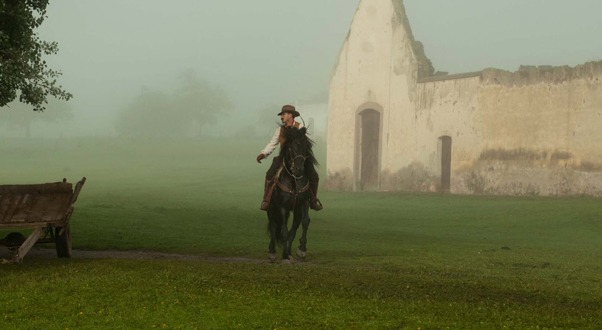 But if you’re looking for one composer who truly launched the next-gen sound in the 1980s with a wave of scores for a series of phenomenally successful movies, then that credit would of course (and always-arguably) go to James Horner. The son of famed art designer Harry Horner (“Angry Red Planet”), James was a UCLA music grad who thought he’d make a career in the academic (i.e. unlistenable) concert hall scene. Thankfully for that thwarted career, and the good cheap tastes of B mogul Roger Corman, Horner’s talent would soon propel him from the likes of “Up from the Depths” and “The Lady in Red” to the seminal bigger budget scores of “Star Trek 2,” “Krull” and “Brainstorm.” And while he’d be adept with the calypso-crime-jazz percussion of “48 Hours,” “Commando” and “Gorky Park,” it was the composer’s orchestral work that established the “Horner-isms” that continue to this day. Even in “Battle Beyond the Stars,” one would hear the dark trilling brass, melody-driven themes and overall Prokofiev fetish-isms that marked Horner’s inimitable territory. It wasn’t so much as if Horner arrived to re-invent the film scoring wheel as he did to then-modernize the same operatic love that established the art, given some positively hip avant-garde twists to film music’s classic orchestral roots. 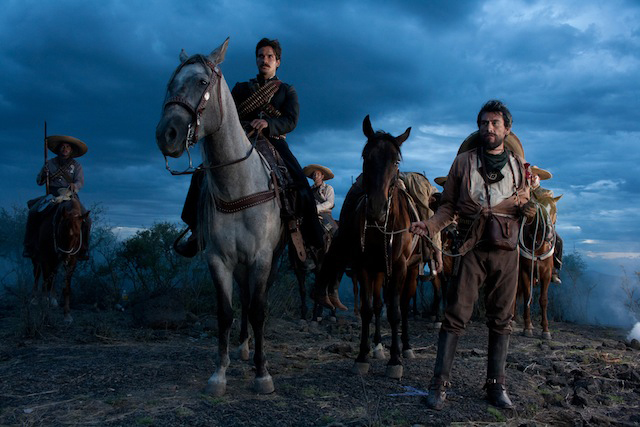 Musical fashions have certainly changed in the ensuing three decades, a time in which alt. rock, bombastic percussion and a vilification of themes have seen most of Horner’s compatriots, not to mention just about every composer before him, put to pasture. Yet while Horner powerfully showed he had the stuff to keep up with the young Turks by rebooting his rhythms for this summer’s unexpectedly terrific “Amazing Spider-Man,” the composer’s orchestral approach has remained unabashedly melodic, an old school approach that sounds positively revolutionary with “For Greater Glory: The True Story of Cristiada.” For in an age where even mainstream film critics are now ludicrously blasting music for calling too much “attention” to itself (i.e. being actual music), James Horner’s score is a defiant 21 gun symphonic salute for the power of film scoring to be heard. It’s the ultimate Horner score, a wonderful fiesta of “isms” that will delight the many diehards who worship at Horner’s altar, while not gloriously giving a fig about what his detractors have to say. 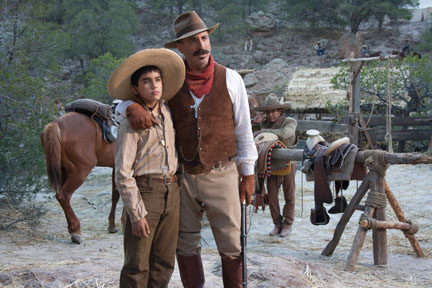 This is the same kind of traditional zealotry that floods the directorial debut of Dean Wright, an effects producer on such Horner-scored movies as “Mighty Joe Young” and “Bicentennial Man” who’s poured all of his religious conviction, and epic visual talents into this true life story about a bunch of ill-fated Mexican believers’ fight against their government’s atheist strong-arming in the late 1920s. It’s the type of bloodily sweeping, crucifix-filled tale that will involve a whole lot of martyrdom from priests, kids, banditos, villagers and noble military men while the women wring their hands on the home front. Basically you either go for this stuff of you don’t, as many emotionally constipated critics didn’t at the time of the film’s release. But their brickbats were futile when the commoners made “For Greater Glory” an unexpected hit, no doubt inspired by Horner’s swelling sermon on the mount. But given that these romantically heroic, doom-laden historical pictures are catnip for the composer who got acclaim for such pictures as “Glory,” “Braveheart,” “Legends of the Fall,” “Enemy at the Gates” and a little movie called “Titanic,” one wouldn’t expect anything less than a score that’s nearly unhinged in its passion at preaching to the choir. 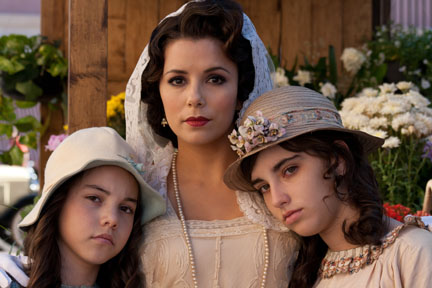 Horner’s never been one to stint on CD running times, or extensive individual cues. “For Greater Glory” is a bounty of both at 78 minutes and at least five tracks that surpass the eight-minute mark. It’s an experience of running through the entire Horner orchestral bible that’s never less than thrilling, or completely engaging. Giving “Glory” even greater spice is the movie’s south of the border setting, allowing Horner to bring back the Latin-inflected adventure of the composer’s two “Zorro” scores to boot. But as always, the theme’s the thing. And Horner’s got the memorably elegiac stuff of William Wallace again in his main melody for the Cristiada rebels and their leader Enrique Velarde, which is first stated in “Entra La Luz Y El Pecado.” Tolling bells, a Latin children’s voice, soaring strings, military percussion and the Horner horn give him cinematic sainthood right off the bat, making no bones about the Godzilla-sized level of emotion that’s going to be at hand. But beyond the clanging and brass-blaring Horner trademarks which next surface in “The Death of Padre Christopher,” you can most definitely hear the spirit of such religioso epics of Rozsa’s “Ben-Hur” and Bernstein’s “The Ten Commandments” at hand in the majestically swelling suffering of the oppressed that will give dispensation for some sanctioned payback in the name of God. 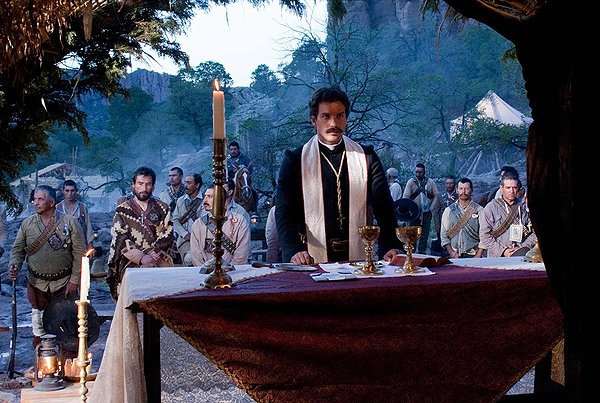 As the spirit of Alejandro de la Vega arrives to gather the troops in “’We’re Cristeros Now” with the furious strumming of a Spanish guitar and pan flutes, Horner delivers some unexpected, near-sanctimonious fun with the taunting vocalese of a children’s chorus. But for as wrathfully angelic as his good guys are, Horner’s talent is also for revealing the men behind the myth, as the tender strings of “Goro and Tula,” the nobly doom-laden horn of “General Gorostieta” and the poetically sweeping strings of “Men Will Fire Bullets, But God Decides Where They Land” tell us that the fight is as much about family as it is religious freedom. There’s no mistaking the sorrowful singers of the slain innocents or the giant, blasting brass of the evildoers in “The Dead City,” the music ramping up with the force of righteous vengeance, which is delivered with gigantic, booming anger in “Jose Saves Catorce” and the roaring chorus and orchestra of “A Bullet On the Roar.” “Ambush” builds its rhythmic suspense with locomotive-like momentum, arming the kid’s voices to become their own percussive instruments. But as particularly with “Braveheart,” triumph has a way of turning to tragedy in Horner’s score, excitement giving way to heart-rending somberness. 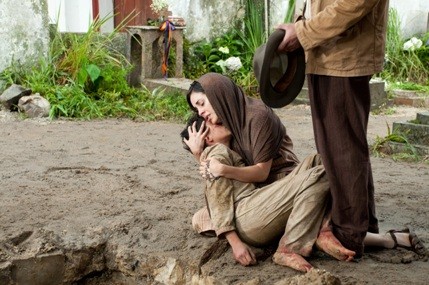 The little children suffer quite a bit in “For Greater Glory,” especially in “Jose’s Martyrdom.” Horner movingly tunes the main theme again to a female vocal, sorrow turning to the steadfast, military revolve of a full, percussive and choral processional. “Death” mourns at a more of a melancholy level with this voice. But the six-shooting round-up of destiny is really delivered in the climactic “Cristeros,” the main theme throttling ahead with chorus and syncopated drums to make the ultimate sacrifice one of breathless Latin-toned exhilaration, music that gives these characters the same emotional charge to the finish as a band of black Union soldiers. As the postscripts role with “Just Another Chapter of History,” Horner’s music lets us know that this is anything but. Just as we might not have remembered the negro regiment, a Scottish warrior or Nazi-shooting snipers, Horner has a beautifully elegiac way of playing these real people as world-shapers in their own small, remarkable way, music that gives us the sense that the fight, and ultimate sacrifice was worth it to grandly moving effect. You can almost see the clouds parting and light issuing forth, here to bell-clanging and choral effect that’s music at its most biblically impactful. 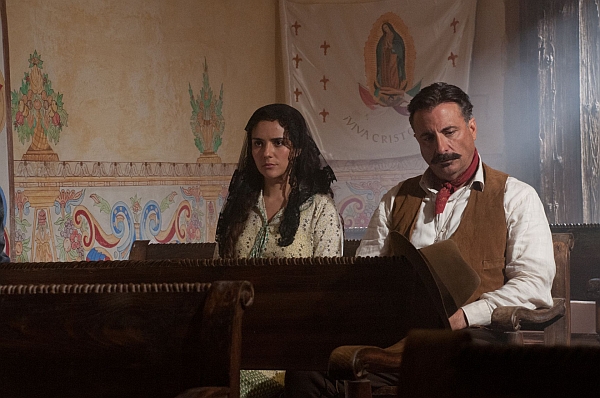 When film scoring oft times feels like it’s in danger of becoming wallpaper, it’s nice to know that there are composers like James Horner who aren’t afraid to blow down the walls of Jericho with the kind of fearlessly melodic and loud scores like “For Greater Glory” that were positively new-hat so relatively long ago. You may have heard this before in different permutations in the composer’s own legendary cannon. And it all comes together again brilliantly again here with a voice that’s as much about the composers who inspired Horner as his own, steadfast melodic resolve. Sure this might be about a bunch of Christ-worshipping avengers. But damn, if it all doesn’t feel more like a one-man Wild Bunch, gleefully blasting themes, singing aloud with every emotional nuance, and cannon-balling over the sound effects with the primal, epic scream of a composer going down in a blaze of glory while proudly exhibiting every trademark that made his Hollywood bones. Thankfully for his true believers, James Horner continues to unabashedly stand. And long may he with scores like “For Greater Glory.”