I’ve just installed Hollywood Brass Diamond and in this review I’m breaking down how to write and plan your template with it. Understanding the diagram below is key to working with the library. 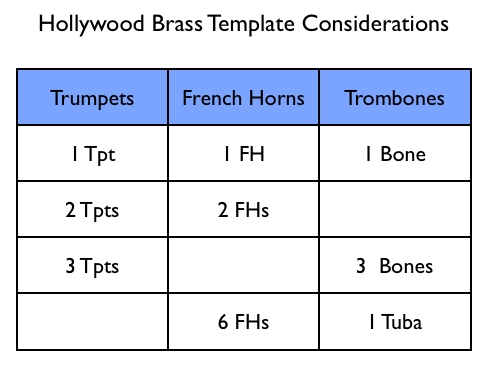 I’m making the following comments as an arranger and former leader of his own big band, as a brass minor at Berklee (don’t ask what year!), as the author of Professional Orchestration 2B: Orchestrating the Melody in the Woodwind and Brass Sections which was endorsed by Pulitzer Prize nominated composer Stephen Melillo, and after having compared Hollywood Brass to Vienna Orchestral Brass I and II, and Project SAM Orchestral Brass. I have neither SONiVOX Brass, nor the Vienna Dimension Brass.

Overall, Hollywood Brass enables you to plan your writing and music production similar to how you would write for a live orchestral brass ensemble section by section.

1. For vertical harmony you can take Solo Trumpet and write it in two or three parts (block harmony or polyphonic writing). If you find some beading happening in 3-part vertical harmony, take a trumpet from another library and consider making it the 2nd trumpet so that Hollywood Brass Solo Trumpet is the top and bottom part.

2. For octaves, take the Trumpets 2 on the high part and put Solo Trumpet an octave lower. You can also write in “light” harmony with thirds, sixths, fourths, and fifths with this combination.

3. If you’re writing a work with only two trumpets, use Solo Trumpet for individual lines, combined for two-part harmony and then move to the unison Two Trumpets.

French Horns
The French horns work slightly differently and here if you want to write more than three (3) vertical harmony parts, you may want to consider adding a horn from a different library on one of the inner parts, and keep the Hollywood Brass Solo French Horn on the inner and outer parts.

You have a Solo French Horn, Two French Horns and Six French horns. You do not have four French Horns in unison which is the most common symphonic setup. Instead, you have a section more akin to Mahler and Strauss. Bear in mind that at f, it takes 2 French Horns to equal 1 Trumpet because the bells of the horns point to the rear of the stage.

Two French Horns – Two French Horns at f = 1 Solo Trumpet at f, so plan your volume levels accordingly. You can use two pairs of Two French Horns to simulate a four-horn section. If you’re writing for four trumpets at f, you can emulate Mahler and use Two French Horns on separate tracks playing open harmony supporting the trumpets or interlocking with the Trombones. For a six French Horn sound, you can write in in triads or other form of three-part harmony and then dissolve into a unison with the Six French horns.

Six French Horns – I suggest keeping these to unison.

Trombones
The trombones work slightly differently. In the symphony, you often have three tenor trombones and then tuba. With Hollywood Brass you have one (1) Solo Trombone, then 3 Trombones in unison including the bass trombone. Then, of course, tuba.

Solo Trombone – Similar comments as above. You can have one to three trombones in light or triadic harmony and add the Tuba for the fourth part. Or, you can write polyphonically with three Trombone parts, then move to the Three Trombone Unison.

Learning Curve
Hollywood Brass doesn’t have nearly the number of articulations as Hollywood Strings (whew!). Consequently, I’d guess 1-2 hours of experimentation with the various articulations and you’re ready to go. Use what I’ve outlined as your starting point for creating your template.

Organization and Writing Flexibility
The overall organization is very good and allows for a lot of writing flexibility. For example, in my Writing For Strings course, we analyze the overture of L’Arlesienne Suite #1 by Bizet which is written for only two French horns. Since Hollywood Brass has French horns in 2s, it works perfectly with the right amount of balance.

The opening to Mahler Symphony #3 has 8 horns in unison starting on bar 1. And the six horns in Hollywood Brass cover it beautifully.

Controlling Volume
As we know by experience, several brass libraries work out volume changes with velocity switching and others with cross fade.

The cross fade methodology used here allows you to create a much more natural line without worrying about your fingers hitting a pitch too hard and jumping up a dynamic level.

What Hollywood Brass Is Not
Hollywood Brass is an outstanding brass section for film, game, concert pieces, jazz and pop applications. And while it does have some “jazz” articulations and more coming on a future update, do not expect a trumpet section dangling up at Double High C. Having jazz articulations doesn’t mean having a sample section made up of guys like Al Porcino, Bobby Shew, Dusko Goykovich, Don Rader, Maynard, Lin Biviano, the late Bill Chase, or Stan Kenton’s trumpet section out of what we used to call North Texas State.

That said, you’ve got a flexibility in this library to cross musical styles, including up to a certain range, the group called Chase made up of four scream trumpet players.

Hollywood Brass doesn’t do these aerials since the trumpets peak at E6, but it is organized so that you could approach them with Solo Trumpet, Two Trumpets, and the Three Trumpets. You could add to this parts of Ministry of Rock 1 and 2, and if you have Logic, there’s your Hammond.

My point here is don’t get locked into thinking that Hollywood Brass is entirely for film, game, and concert work. Though the performance of Chase was from the early 70s, still, the idea is there as to what you can produce with some musical creativity. With all the new PLAY stuff recorded in the new EastWest Studios, you can look at the entire collection and start picking and choosing to create unique ensembles.

Pricing
With Hollywood Strings, I felt confident about suggesting that Gold was probably enough. But at this point with the intro pricing going on, and given that the library is only 150GB or so, I think you’d do well considering the Hollywood Brass Diamond Edition because of the extra flexibility it gives you in mixing and matching libraries. Overall, I think it’s a great value, so consider getting it while it’s on Pre-Order pricing which ends August 31, 2011.

It’s quick to learn. And you have enough articulations to get the job done, including muted brass. The only “wish” I have at this point is that it would have been nice to have had Four French Horns and Two Trombones to round out the sectional possibilities.