In Praise of the Synthesizer, Be It Hard or Soft

Film Music Institute > Film Music Magazine (Archives) > Technology (Archive) > In Praise of the Synthesizer, Be It Hard or Soft

Lost in the furor of the latest and greatest advancements in sample libraries is return of the synthesizer. Did it ever really go away? No, but until recently it has been somewhat on the back burner in the film composing world, relegated to second fiddle in “hybrid” scores. But with the score for “The Social Network” winning the Oscar and successful synthesizer oriented scores for films like “Me And You and Everyone We Know”, “Tron Legacy”, “Sunshine”, and “The Book of Eli” the synthesizer is again making its presence felt as a lead character.

While already an important element in rock and pop records, the synthesizer first made a splash in the film world in a period in the late 70s to early 80’s with Academy and Grammy award winning scores like Giorgio Moroder’s pulsating score for “Midnight Express”, Vangelis’ evocative score for “Chariots OF Fire” and popular scores with catchy themes played on synthesizers like Harold Faltemeyer’s for “Beverly Hills Cop”. Suddenly, the synthesizer was a big deal in the film score world and even orchestral composers like the late great Jerry Goldsmith, arguably the godfather of “hybrid” scores, rushed to integrate the sounds into their scores.

Synthesizers were complicated things, however. They had so many knobs, patch cords, and generated sounds from weird things called oscillators and went through filters, stuff nobody taught us at music school. My dear lord, look at these pictures of an Arp 2600 and a Moog Modular! 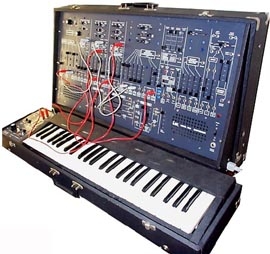 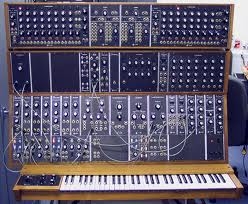 Whilke there were smaller and less complex versions that came form these, like the Arp Odyssey and the Minimoog, they still were very foreign to classically trained guys like me.

Also the good ones were expensive for wannabe film composers back in those days. My first synth? The Univox Mini-Korg. 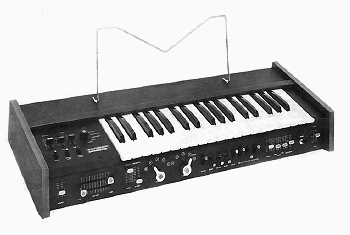 This single oscillator beauty was simple to use, had a chorus switch to make it sound fatter, and was cheap.

Contrast it with the much better but far more complex and expensive 2 oscillator Arp Odyssey and 3 oscillator Minimoog. Well, a picture is worth a thousand words :) 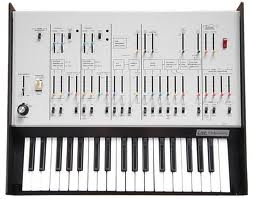 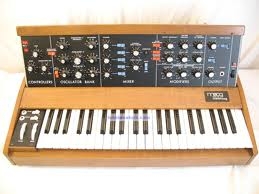 In those days, I was a certified technophobe. I could handle setting up a Rhodes Suitcase and a Crumar Orchestrator but no way was I ready to take on a Minimoog or more complex polyphonic synths like a Sequential Circuits Prophet 5, Oberheim OBX-a or a Roland Jupiter 8, which cost about 5-6k anyway. And even skilled film scorers frequently hired programmers to create the sounds for them.

But man, the sound! In those days, while synths could sometimes be used to simulate orchestral sounds, mostly they were prized for being able to create sounds traditional instruments could not and the variety was stunning. You had the Oberheim OBX, Moog Minimoog, Roland Jupiter 8, Sequential Ciruits Prophet 5, Yamaha CS80, and later, digital synths like the Yamaha DX7, Roland D50, and the Korg Wavestation. They all had very different sounds and eventually variations of were available in all kinds of models at different price ranges. Also, we saw the advent of keyboard-less rack mountable “tone module” versions of them that were less expensive. If you walked into any recording studio in those days (yes, Virginia, once upon a time there were a lot of them) you would find rack upon rack filled with them.

Flash forward to present day and now we have a world of soft synths at our disposal with tons of patches, with tons of presets, with built in tempo-synced arpeggiator patterns (a feature the pioneers would have killed for) as well as exiting hardware synths like offerings from Access, Dave Smith, and the usual suspects Yamaha, Korg, and Roland.

Whenever the hardware vs software discussion comes up, I always quickly concede that in most cases there is definitely a sonic superiority to the hardware and so it is with synths. Some guys try to minimize this by running their software synths out to amps, processors, and consoles and bringing them back in and it does in fact make a difference. But it is, as they say in Yiddish, a big potchke. There is also the heat and electrical and maintenance costs associated with all hardware, and there is the benefit with soft synths of recall-ability and little to no latency to deal with. Finally and perhaps most importantly, you can buy a boatload of soft synths for the price of one good hardware synthesizer without the depreciation factor. So most of us are content or at least resigned to primarily using soft synths.

Basically the soft synths fall into two categories: those that emulate classic synthesizers and those that are their own beast, especially hybrid synth/samples ones. Arturia is probably the best known creator of the classic synth emulations with their versions of the Moog Modular, Minimoog, Arp 2600, Jupiter 8, Prophet V, and CS80. But there are other emulations too numerous to mention that have their passionate advocates who tout their superiority to the Arturia offerings. A Google search will lead you to many of them.

Among the more popular soft synths that are nor strictly emulations are the Uhe Zebra (a favorite choice of Hans Zimmer’s reportedly), Camel Audio Alchemy and Camlephat, Native Instruments Absynth and Reaktor, Rob Papen’s Predator and Albino 3, and Linplug’s Crono X and Octopus. This page will get you started.
http://forums.sonicacademy.com/Topic62419-8-1.aspx

And there on that list, you will see rated number one is Omnisphere by Spectrasonics. If you are not a hardcore synthesist intent on making your own sounds from scratch, this is probably the one to own if you are only going to own one. It combines synthesis and samples, has thousands of breath-taking sounds and can be used in a simple manner or fairly deep under the hood. It is also affordable and perhaps the single biggest bargain in the entire software world in my humble opinion.

That said by the way, if you own any one of the major DAWS like Apple’s Logic Pro, Steinberg’s Cubase, Mark Of The Unicorn’s Digital Performer, Avid’s ProTools, or Cakewalk’s (now owned by Roland) Sonar you already have some darned good ones to explore. I am particularly fond of Logic Pro’s ES1, ES2, and Sculpture, the string-based synth.

Cubase users have Retroluge, Prologue, Mystic, and Spector in their arsenal.

Digital Performer gives you BassLine, PolySynth, and Proton among others.

Sonar has a bunch of them, like Z3TA+2, Rapture, Pentagon, and Triangle i.e. It got a little confusing to me on a visit to their website and they have many different levels of Sonar that are available with differing included synths but in all candor, I only spent a couple of minutes checking it out.

ProTools is lighter in the included synths department with only Xpand2 and Vacuum soft synths, probably because it is still more often the choice for engineers who also compose than composers who also engineer. (Forgive me ProTools users if you think that characterization is inaccurate or out of date, but it is still by and large what I see here in Los Angeles.)

For the “roll your own” crowd, Propellerheads Reason is pretty unique, as it allows you to combine a bunch of included synths, like Thor and Maelstrom into a “rack” with fx, giving you a great level of control and creativity. Personally, I have never been as enamored by the sounds I have heard coming from Reason as many others seem to be but as they say on the net, YMMV and there is no doubt that it is a powerful tool.

Obviously, I am no longer technophobic, so did I ever come to terms with the knobs, oscillators, filters, ands modulation matrixes of synthesizers and go beyond simply loading a preset? Yes, I did.

When I became a Logic Certified Trainer Level 2, back in the days of Logic Pro 7, I had to be prepared to teach everything that was in the two Apple Training Course books, both the intro book and the advanced book written by David Dvorin. David included a section on understanding how the GUIs (graphical user interface) of the Logic Pro ES2 polyphonic synthesizer and ES1 monophonic synthesizer, indeed all the Logic synths, functioned and for the first time, I had a basic understanding that the sounds were created by oscillators generating various waveforms like sine, square, sawtooth, etc. that flowed through filters, modulations, amplifier controls and fx. I learned a little about how to shape the sound from the ADSR (attack, decay, sustain, release) and how to use LFO’s (low frequency oscillators) to control vibrato and other musical aspects. In his advanced book for Logic Pro 8, he went deeper still into them, as well as into Logic Pro’s Sculpture. So now, while I am not a synthesizer programmer by any means, I have a fundamental understanding of what oscillators, filters, ADSRs, LFOs, and modulation matrixes, etc. do so that I can sit down with a software synth and after getting familiar with the GUI, start to load a preset and turn it into something that is more my own. And yes, a hardware synth as well!

So give the gift of synthesizers to your musical compositions. Unlike sample libraries, they are not trying to be something they are not, they are unique sources of sound generation. If you are new to synthesis, start with one or two, try the presets and observe the differences in the GUIs between the different patches. Tweak the presets and experiment with them. After all, unless you overwrite them, the presets will always be there. Become familiar with the lexicon of the synthesizer world so that you diminish the intimidation factor.