t’s been nearly a decade since the Spartan space-warriors of future Earth took on the Covenant, an array of fanatical aliens bent on spreading their dogma, and dominion over our planet and its colonies. The intergalactic scope of this battle has grown into myth, not to mention countless Xbox hours as the Halo saga truly made videogaming into an international pastime worth millions in the creation of its interactive mini-worlds- as well as sales.

There from the beginning of this phenomenon (not to mention well before it) is the music of Martin O’Donnell. Along with co-composer Michael Salvatori, O’Donnell has arguably created the template of videogame scoring, a once 8- bit affair that has now grown gigantic symphonic scores as accomplished as any big screen effort. It’s a cosmic importance that O’Donnell hears loud and clear as majestically soaring themes mix with world percussion, monk-like chants, subtle piano playing and rocking guitar and techno samples, grooves that come in handy for when it’s all about blowing the joystick crap out of the Covenant.

Now O’Donnell’s Spartan service for the Halo saga reaches its end on the planet Reach, wherein the gold-masked warriors finally reveal the very human, and scarred hearts within their armor. And while the fanboy rock energy is very much on deck, the more emotional direction of Reach gives a new poignancy to O’Donnell’s surprisingly melodic work. It’s music that’s always strived to give emotion to a medium that’s essentially about blowing the green-blooded crap out critters, albeit with ever-evolving graphics that now reach a new zenith with Reach.

Whether his electronics are flying a starfighter, using percussion to hover over a city under siege, or thrashing with a tank’s cannon, O’Donnell’s impactful scoring gives Halo Reach the do-or-die feel of making a last stand. That’s likely because this is the end of a culture-changing road for game makers Bungie, who will be surrendering the Halo franchise back to Microsoft. Granted Halo is this Covenant-like corporation’s property, but it will be hard to imagine the Spartans sounding quite the same without O’Donnell’s award-winning voice.

A USC music grad who’s been with Bungie since the days of such other trailblazing games as Riven and Myst, O’Donnell became the company’s resident audio director and composer through the Microsoft acquisition that spawned Halo. Now with Bungie independent again, O’Donnell’s music plays his final Halo battle for all of their pop opera worth on the planet Reach, with a score that recognizes the myth that his music has helped to make it, with the kind of stylistic creativity that’s always been more than a simple shoot-and-kill space game. 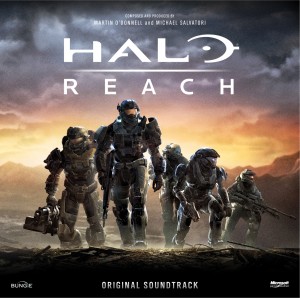 How do you think Halo’s music has changed over the course of the games? And what do you think sets Halo Reach apart from the other soundtracks?

The playback engine has gotten more sophisticated and responsive over the years. The music has probably matured a bit because I’ve actually grown more than a decade older since I started. I’ll leave it up to others to compare soundtracks.

Since this is Bungie’s last game in the Halo series, did this set the bar even higher than your previous Halo scores?

I don’t really think in terms of a higher bar since I’ve always tried to do the best I could on each score. I certainly wanted this score to match Bungie’s last Halo game in every way possible. The story of Reach is different than the story of Master Chief or ODST, and I wanted the music to enhance this unique story.

What’s the basic process for scoring the player’s action in a videogame, as opposed to composing the in-between cinematics?

Cinematics are linear and I can score them to a set time. In-game music needs to adapt to variables that can change the length of the music that plays. I need to compose and design music that can seamlessly playback in our sound engine and adapt to triggers that cause changes in the music. Hopefully that will give the player the sense that their personal journey through our game has been scored in a way that’s unique to their own experience.

How do you think your Reach score represents the Spartans, especially since we often get to see them as helmet-less, human individuals?

I was able to compose more music that emphasized the humanity and sacrificial nature of Noble team. There were more emotionally poignant moments in Reach than any of our previous games.

Could you talk about the “religious” aspect of the score, and how they play the religious fanatic aliens in The Covenant?

I was never really going for a “religious” feel in the music. I was looking for a feeling of something ancient and important. That’s where the “monks” came in. Certainly there are almost iconic images and events associated with the Halo story that encompass religious imagery and that is also a reason why the music will sometimes evoke a sacred feeling.

Your score often makes stylistic switches from lush orchestrations to savage percussion and gritty rock and techno beats. How, and when did you want to make those segues?

The score represents a range of music that I enjoy listening to and composing. The different feelings and genres can be used appropriately in many different situations. I try and just match feelings in the music with feelings we’d like to evoke in the player.

Do you think it’s important for videogame composers to be players as well, especially when it comes to Halo?

Yes absolutely. I can’t imagine scoring a movie without being a consumer of movies. For the same reason, I believe that a game composer should be a fan and player of games in order to more intimately understand the power and function of music in the

Do you think you’re scores volume has been pumped up louder for Reach than in the previous Halo games?

Well, it shouldn’t be. The final stage in our finishing process is the final mix. I’ve always tried to make sure that music fits in its proper place without getting in the way of the rest of the sound design and dialogue.

Do you think that Halo has helped give “respectability” to videogame scores?

I’m a longtime fan of games and believe that games are the next new medium after film and TV. All mediums have humble beginnings but by now I think games are certainly “respectable.” Halo came along at the right time and at the right place.

I don’t think it’s easy either direction. They are two related but different crafts.

How do you give musical closer to Halo here?

The story itself had such a powerful conclusion and the final scene was written so well that writing music to accompany the end was a pleasure. The heavy lifting had been done for me.

Even without Bungie’s involvement, do you hope to continue on in the Halo universe?

I have no plans to work on any future Halo projects and I’m looking forward to being a fan of whatever comes next.

Tell us about your future plans, especially in the videogaming world

Bungie is ready to work on our next big thing and I’m ready to produce and direct the sound and music for whatever that will be. I’m looking forward to a brand new future.