If the saying “Two heads are better than one” is true, then it couldn’t be more correct in the case of two composers whose names are literally joined at the neck. For in the catch-all guise of Tomandandy, musicians Tom Hajdu and Andy Milburn have created a surreally unique, sample-driven vibe that effortlessly straddles the worlds of rock and electronica as they fuse melody and sound effects at the DNA level- with just a tip of the hat to musical traditionalism thrown into their revolutionary beat. 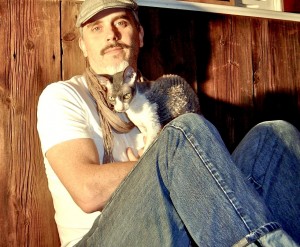 Coming to the fore with the psychedelic anarchy of 1993’s KILLING ZOE, Tomandandy’s versatile approach has ranged from the nostalgic romance of WAKING THE DEAD to the eerie feedback of MEAN CREEK and the sex-drug hip-hop of RULES OF ATTRACTION among their numerous collaborations. But if there’s one genre where Tomandandy’s music truly shreds, then it’s for the sonic nightmares provided by the horror genre. Their sound can be massing with the creepy portents of THE MOTHMAN PROPHECIES, rocking with the cannibal attack of THE HILLS HAVE EYES, screaming with the apocalyptic dread of RIGHT AT YOUR DOOR, or being fearfully minimal to the point of non-existence in THE STRANGERS.

Now Tomandandy’s creative terror shreds anew with the third-dimensional onslaught of RESIDENT EVIL: AFTERLIFE. For the fourth entry in Alice’s never-ending, ever-mutating fight against the undead minions of the Umbrella Corporation, writer-director Paul W.S. Anderson has returned to the filmmaking chair for the first time since the original movie, ensuring that this ambitious videogame-to-film franchise entry will be more than just another number. It’s a Lovecraftian wasteland that’s been musically trod before by Marco Beltrami, Marilyn Manson, Jeff Danna and Charlie Clouser. Tomandandy follows with what might be the most bizarre soundtrack of the series, as samples gleaned from Cthulhu-knows-where mix with Ninja-ette guitar thrash and electronic rhythms. Yet Tomanandy’s EVIL isn’t all craziness, as the haunted melody of our heroes’ zombie trauma is an equal partner to the score’s action. 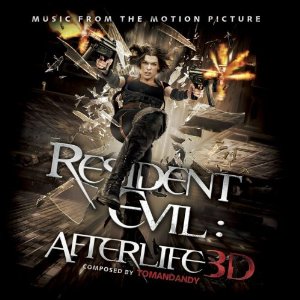 Now on hand to give just a glimpse into the method of Tomandandy’s madness is Tom Hajdu, whose co-determination to change the face of filmscoring has resulted in a wealth of wildly eclectic scores- perhaps none more intriguingly in your rotting, sword-wielding and gun-blasting 3D face like RESIDENT EVIL: AFTERLIFE.

You certainly have one of the more distinctive names for a composing duo. How did you decide to join your names together, and why?

Well it didn’t start that way. We were in New York City working on several music and media projects. And no matter what we called ourselves, people kept referring to us as “those guys,” Tom and Andy. Believe us, we tried to change that but it never worked. So we decided to embrace what people were already calling us. We took the two names and compressed them in an “E.E. Cummings” sort-of-way. We then had a creative director in New York create a tomandandy logo, which started showing up in all sorts of places such as fashion magazines, parties, clubs and eventually in Roger Avary’s film THE RULES OF ATTRACTION, where there’s a character called “tomandandy girl”.

Though your names are linked, does ego ever come into play in your collaborations?

We don’t take the traditional approach that most composers do to authorship issues. When you hear scores by a famous composer, chances are they have a familiarity to them: they sound like that composer. Our approach is different in the sense that we try to make each score sound new. While all the scores are visceral, they are unique in their approach to pitch, rhythm, orchestration etc. This approach is a little unusual but it keeps us on our toes.

Do you think your sound is particularly suited for genre films like RESIDENT EVIL: AFTERLIFE?

Each RESIDENT EVIL film has had a different composer who has brought something new to the films’ world. In that way, we don’t have a “tomandandy sound”. We approach each project on its own terms and try to create something new for each project to make its experience the best it can be. In that respect, RESIDENT EVIL: AFTERLIFE is an action/horror film, and quite different than the scores we did for films like THE MOTHMAN PROPHECIES, THE HILLS HAVE EYES and THE STRANGERS.

This is your first entry into the world of RESIDENT EVIL. Did you bone up on the computer games, or past movies once you’d gotten the gig?

We’ve both been playing videogames for years. We used to play videogames online before graphics were even available. For example we used to play “Rogue” and “Hack” early on. Later as consoles exploded, we played video games too. While we have always wanted to work in the video game genre, we haven’t had an opportunity to do that yet. We were both familiar with the past movies before the project also. After we started the project we revisited the movies and listened carefully to RESIDENT EVIL scores. We tried to capture some of the essence of the first score here, but in a new stylistic way.

Do you think that Paul himself is directing this movie give the franchise more passion than it’s previously had?

Paul Anderson was very passionate about refreshing the franchise. And as soon as we saw the first few seconds of the film, we knew immediately that he had succeeded. Our goal was to make the music as compelling as his writing and direction.

Does Paul’s stylistically go-for-broke filmmaking reflect your approach to composing?

Paul really knows this franchise. He created it! And he’s committed to creating the very best film possible. Our approach was similar: to create music that would rise to the level of the film he made. We were lucky to work with such a visionary and we hope that our music has risen to the level of his film and the vision that he had for the project as a whole.

Do you think you and Paul share a “punk” attitude as to how delirious his filmmaking, and your music, can get?

That might be true. However we never spoke about “punk” attitudes. Paul has a very deep understanding of musical aesthetics, and his sensibility is very refined. We were able to find a voice for the film by discussing, and creating music that could truly be “new.” It was an intuitive process that proved to be very fruitful.

Do you think your music represents how much the sound of “horror scoring” has evolved. Or do you see traditional elements in your score for AFTERLIFE?

This RESIDENT EVIL score is new, and yet it is strangely familiar. The method of music production is new in this cinema context, because the musical language is informed by modern music production and underground aesthetics. The ways in which these sounds work as a score, in the context of the film, are new, since these kinds of sounds and production techniques have not been used frequently in this context. Yet the emotional experiences expressed in the music are archetypal.

How would you say your score conveys the lonely, apocalyptic world of RESIDENT EVIL?

We created a matrix of inorganic sounds, some distorted and some clean. This allowed us to create a score that framed an aggressive, distorted world on the one end, and a clear, dreamy world on the other end. And if f you listen carefully, you will hear Tom’s breath, which intertwines these two, extreme worlds, and allows the music to feel organic in a subliminal way.

How do you think the rock guitar attitude of your score fits Alice’s attitude?

It was Paul’s ideas to create some kick-ass Alice attitude music. He suggested that nasty electric guitar would be a good way to achieve that during the scenes where she fights the Umbrella guards and also in the section where she battles through the zombie horde at the prison.

Did the 3D element affect your score?

The look of the entire film affected the score. From the first day we saw what Paul had made. While we were expecting to need over-the-top spatial musical effects to compliment the 3D, what we discovered instead was that Paul’s use of 3D is primarily to create a powerful and immersive cinematographic experience, full of depth and subtlety.

Your use of samples always makes your scores stand out. What went into the ones in AFTERLIFE?

This score was carefully produced. So the way in which the frequencies blend or clash has a lot to do with how the score functions and sounds. While the sound is big and thick and powerful, it is also fragile. Adding too many sounds could make the score sound small ironically. At the same time, using just a few parts will have the same effect. It’s all the relationships between the distorted instruments, the clean sounds, and the organic and inorganic sounds that make the AFTERLIFE score work.

Would you say your high-tech approach similarly blurs the line between composing and engineering sound?

No. In this score, our approach blurred the line between composing and production.

Your other upcoming genre score is for the remake of the 1970 thriller AND SOON THE DARKNESS. What can you tell us about your score for it, and how it suits this new take on the material?

AND SOON THE DARKNESS is a very different film from RESIDENT EVIL, since we use a large orchestra to articulate a story of an abducted young woman in Argentina.

Each RESIDENT EVIL film has used a different composer. Would you hope to be the first musicians to stick for the franchise?

We would be honored!

Fight the future of RESIDENT EVIL: AFTERLIFE with Tomandandy here