Not since three guys named Abrams, Abrams and Zucker turned skit comedy into absurdist homages to all things pop and late night movie culture with the likes of “Airplane!” and “Top Secret” has a humorous brain trust made stream-of-consciousness spoofery into a thing of art. That credit for newly mining the likes of “Bloodsport,” “Jaws” terrible Mexican movies, kitsch 70s songs and the bad hair of network news can go to Adam McKay, Will Ferrell, Matt Piedmont and the rest of the gang that have created the hilariously satiric website Funny or Die, “Anchorman 2,” the crazed Spanish-language Telenova goof “Casa di me Padre” and IFC’s currently running TV mega-miniseries spoof “The Spoils of Babylon.”

Switching musical channels between song parody and deceptively serious instrumental scoring just a flawlessly for them is the team of John Nau and Andrew Feltenstein. Spaghetti western guitar, Mozart-ian piano pieces, lounge lizard jazz, acid rock and having Steve Lawrence do a swaggering “Spoils” theme song that would fit a Bond film are just some of the stylings that Feltenstein and Nau have come up with for the cult-made Funny or Die brand of comedy in all of its small and big screen permutations.

Based out of their Beacon Street Studios in sunny Venice, California, this duo that’s been weaned on pop and jazz music have also dexterously applied their talents to TV commercials, working such pop stars as Christina Aguilera and scoring such films as “Kids With Money,” “The Bachelorette” and creating an inimitable Swingles Singers-esque theme for the upcoming black comedy “Better Living Through Chemistry.” These are but some of the constantly varied assignments that account for Feltenstein and Nau’s jack-of-all styles sound, one that’s at on the hip thumb of retro-humor zeitgeist that particularly distinguishes their work for Ferrell and Company.

Now currently slamming on Superbowl commercials, Feltenstein and Nau take a quick break to comment together on keeping a straight musical face in the midst of in jokes that sometimes only the geekiest of movie buffs would get, or ripping their emotional guts out for an ode to a great white shark.

Could you tell us about your and John’s musical backgrounds, and how you first started working together? 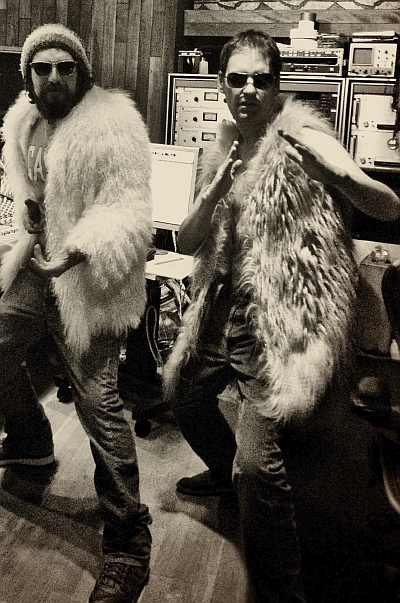 Andrew Feltenstein: John and I met in a studio in Venice, CA. It was kismet – we really became fast friends and decided to open our own studio, which we did, called Beacon Street Studios.

Nau: It was a ton of work! We are still proud of it to this day. We really understood the role of the music in the film and played to this strength, which helped set the mood throughout the film.

You did TV commercials for quite a while for the likes of Burger King and Coca Cola. How do you think those brief spots helped you develop as composers, not to mention being able to fit a lot of ideas into the kind of short cues that comedy scoring is usually made of?

Feltenstein: We treat them like tracks off an album, and play them live as often as possible with great musicians. We still do TV commercials – right now we are working on some Super Bowl ads. It keeps our chops up.

Who among the Funny or Die gang first discovered you, and what do you think it was about your work that attracted them?

Nau: Matt Piedmont found us in a weird Venice Alley – it was working on a project for BudTV. From there he brought us on board to do “The Carpet Brothers” and “Brick Novax’s Diary.” “BudTV” was a futuristic space man theme to news cast themes, which used lots of different genres. “The Carpet Brothers” was 70s inspired music from a Carpet Commercial 70s jingle to 70s french music. The music on “Brick Novax’s Diary” helped tell the story of a fallen hero that is dying and recalling the moments of his life. The music enhanced the storytelling and plays to the genre of the memory, whether it was the perfect lounge music to get the babe or a romantic theme that helped bring the characters and his memories to life.

Your first movie score for Will Ferrell was on the hilarious Mexican movie satire “Casa di me Padre.” What was that collaboration like? Would you say it was akin to working in a comedy writer’s room, but with music? 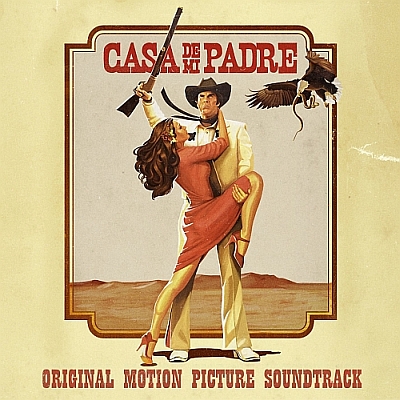 Feltenstein: It could not have been more collaborative – Will riffs and we try to keep up! It was dope – he was in our studios in Venice wailing away on the trumpet. The outtakes are hilarious. the first time we worked with him, he came to our studio in venice to sing “Yo No Se” for “Casa de mi Padre.” He showed up in shorts and knee high sports socks, just an average guy, and happily got into our hot and sweaty vocal booth. Then he proceeded to work his butt off to sing that song in Spanish, which is no easy task. And when you hear it, he’s killing it! Will has a very good voice and good sense of pitch and timing. We’ve done 6 or 7 songs with him, and he’s always prepared and ready to go for it, not just “I’m here and you got me for a half an hour,” but until its great.

How did “Cana” set the tone for your “spoof” approach? And did you study the kinds of music, and scores it was drawing from to emulate that sound?

Were there any past “spoof” scores that influenced you? And do you think there has to be a sort of “wink’ to a satirical score as opposed to playing it completely straight?

Felstenstein: We both love “Animal House”.

Nau: As I said though, we play everything really straight – that’s the key. To play is to straight that it becomes over the top.

“Anchorman 2” marks your first entry into Ron Burgundy’s peculiar world. How did you hear his character? 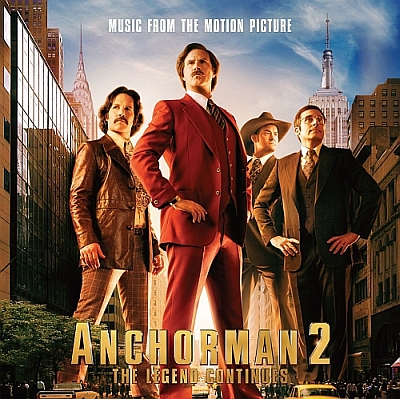 Nau: Will and Adam introduced us to Ron. We read the scripts individually – and came away with a melodramatic feel to the story. Ron is uber everything. So the music needed to reflect that. Again we didn’t score the comedy – we played for the heavy dramatic moments. The comedy comes in the set-up.

Tell us about your collaboration with Adam McKay.

Feltenstein: Trust and respect went a long way. He trusted us with his baby and we respect the heart of it. The shared goal was for the music to support the characters and the comedy. McKay gave us thoughts of how the music could work but was also open to our interpretation. The communication ran both ways and was very open.

What was the trick to capturing a spot-on 70s-80s groove, and how did you want the score to work in tandem with all the classic songs on the soundtrack?

Nau: That’s where we both come from. We have the knowledge of and have played 70s and 80s music. When we play to these eras, we cut and produce/record it exactly the same way they would have. Our set-up is not reflective of today’s modern studio recording. That was the same way with “Casa.” We brought in great players, recorded it live and used the same equipment that would have been used in the 70s and 80s. We kept it raw and real. 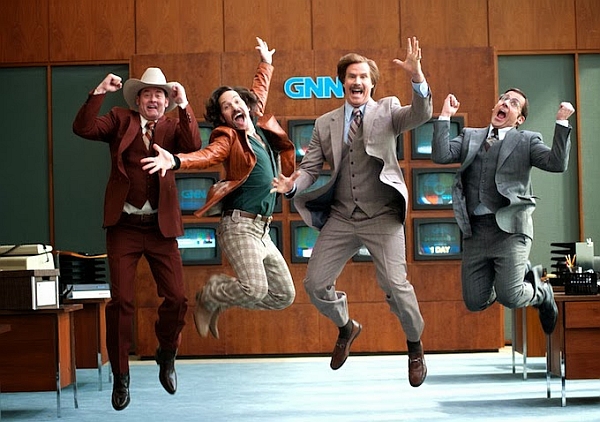 Pretty much anything goes when it comes to the “dramatic” underscoring in “Anchorman 2.” Would you say that you have be jacks of all musical trades to hit everything from Ron’s sense of patriotism to a big monster battle at the end?

Feltenstein: Yes and No. We were asked to cover a lot of different genres so having that knowledge helped a bunch. But one track that I think defies all that convention is John Nau’s “Walters Sonata” – exemplifying a timeless piece of music. It is the climax of the movie and Ron’s personal and professional life are both at crucial points. The sonata plays the drama and suspense perfectly. It engages the viewer and keeps them hanging on to the action.

What makes a great goof song? And what’s your process like for writing one? Who are the song parodists of the past that you look up to?

Nau: We leave the comedy to the director, writer, and actors and not to us. Our job like for any score is to find the emotional core. Ron Burgundy doesn’t think he’s being funny. He’s playing it straight. The comedy is in the juxtaposition of what he says, does, and what normal folks in the audience this is legit. If we score the comedy the music becomes the joke. For the song “Doby” we wrote a love song. The comedy is that it just happens to be sung by Ron saying goodbye to his pet shark. Adam and Will asked us to come up with a sincere ode to a dear friend, something timeless. So that’s what we did. 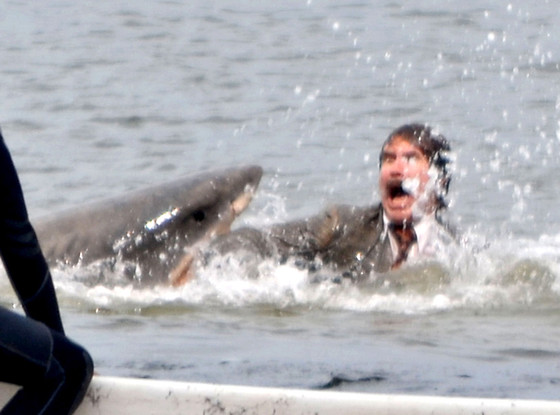 Like the first “Anchorman,” they shot a whole other movie of “Anchorman 2” before ending up with the release version. What’s the process of discovery like, and could you tell us about what we can expect from the movie, and music for the alternate reality “Anchorman 2?”

Feltenstein: It is like when you uncork a bottle of wine you never know if it is skunked or drinkable.

You’ve also written a gallery of absurdist songs for IFC’s “The Spoils of Babylon.” Were you ever fans of the overstuffed TV sagas it’s saluting, particularly their florid romantic ballads?

Nau: The vocal performances are absurd but under the hood they are great serious pieces of music. Specifically the main title piece – it’s done with earnest. We are not fans of TV sagas. 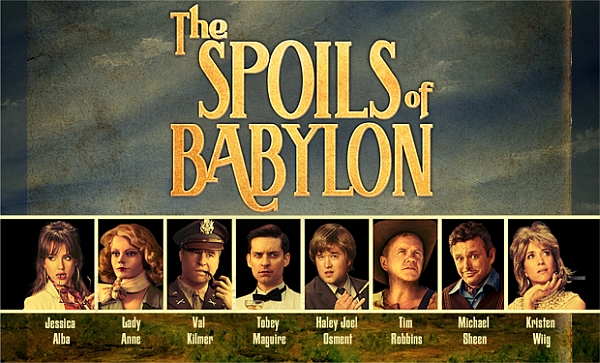 What was it like to work with the great Steve Lawrence on the theme song, which sounds almost like the opening of a James Bond picture?

It was amazing, Steve is a true professional and still has the magic.It was a thrill to have him in the studio and to get to hear him sing. He was the perfect man for the theme song.

You next have “Better Living Through Chemistry” coming up, where a pharmacist goes on a tear through the dark side in a major way. What can we expect from your score? 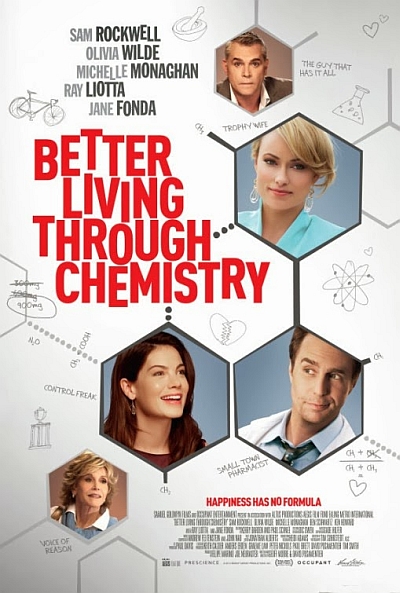 Feltenstein: It is a darker minimal score with jazz overtones. We truly tried our best to keep the music within the homemade ensemble we put together.

Do you ever yearn to do straight-laced scores?

What do you think has made your collaboration work for so long? And would you have any advice for upcoming scoring teams?

Feltenstein: We respect each other and we treat every day like our first. And don’t keep trundle beds in the studio.

How do you think Adam, Will and the “Funny or Die” gang is changing comedy, and its sound? And would you consider yourselves to be the court composers for it?

Nau: They are just kings of a brand of humor that is uniquely their own. Every collaboration goes one step further but you see their influences and the elements that are uniquely theirs.

Feltenstein: We are glad to be on their coat tails but we do not consider ourselves to be the court composers. We’re just lucky to be riding on the train.

“Anchorman 2” is now in theater. Watch “The Spoils of Babylon” on the IFC channel, and keep a look out for “Better Living Through Chemistry” this March

Buy the soundtracks for “Casa di me Padre” HERE, and “Anchorman 2” HERE