With scores often bordering on the impossibly lush and melodic, Roque Banos has been composing Hollywood-worthy scores in his Spanish homeland for the better part of thirteen years. And while the likes of the cop-mocking TORRENTE series, the dance rhythms of SALOME and the swashbuckling ALATRISTE are yet to be discovered outside of foreign score cineastes’ ears, Banos’ talents have nonetheless, and thankfully reached our shores with the boiling crime sound of Ben Kingsley’s SEXY BEAST and Christian Bale’s Theremin-inspired mental breakdown in THE MACHINIST.

For a composer whose work sings with thematic elegance, Banos’ scores have also graced the gloriously perverse work of one of international cinema’s most unabashedly outrageous directors. Over the course of seven pictures, Banos has given melodic credence to Iglesias’ sex and violence-filled visions of insane priests ((DAY OF THE BEAST), cash-crazed tenants (LA COMMUNIDAD), out-of-control movie cowboys (800 BULLETS) and math-obsessed murderers (THE OXFORD MUDERS). Now this gonzo spin on the Hermann-Hitchcock collaboration goes completely over the top with a film so twisted that both men will likely be looking over their shoulders for offended clowns for some time to come.

Like some unholy mash-up of Todd Browning’s FREAKS, Alejandro Jodorowsky’s SANTA SANGRE, Paul Leni’s THE MAN WHO LAUGHS and, most hilariously of all Alfred Hitchcock’s VERTIGO, Alex de la Iglesia’s THE LAST CIRCUS throws a machete and machine gun into some circus performers, then goes from there into the big top of splatter violence and abusive sex. It’s enough to make a little kid grow up into a hapless, and then deformed, machine gun-packing clown from hell. Facing off with him for the equally warped love of gorgeous, nymphomaniac aerialist is another scarred, sadistic performer who makes The Joker look like the height of kind reason. It’s a battle of the insane clown posse that ends up on top of one very big cross that symbolizes the Spanish Civil War atrocities that gave rise to the most f’d up circus movie of all time. 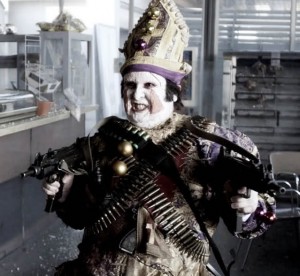 Treating all of Iglesias’ brilliantly objectionable political satire in a very, very important way is Roque Banos. Blasting forward with military percussion, hopeless attraction, haunting voices and orgasmic Bernie-isms that outdo Herrmann himself, Banos’ LAST CIRCUS score is sweepingly romantic monster music for the beasts we all know clowns to be, the score’s dark, brassy fury reaching Godzilla-sized menace as one lethal bozo’s misdeeds tops the other. Yet there’s also delicate, moving poetry to be found as well within Banos’ soundtrack all of it operatically played with the kind of black-humored, mostly straight-laced fashion that’s a hallmark of Iglesias’ cult style. As over-the-big top as THE LAST CIRCUS is, it’s also one of the year’s most musical scores, full of rich symphonic themes and melodies that have Roque Banos does Herrmann’s ghost proud, all for a movie that would likely make him turn over in his grave.

THE LAST CIRCUS is your seventh film for Alex de la Iglesia. How did your collaboration begin, and what do you think has kept it going?

Our first movie together was MUERTOS DE RISA (DYING OF LAUGHTER) in 1999. But we first met at the premier of Santiago Segura’s detective comedy TORRENTE, the first film in the most successful movie series to be released in Spain. Alex came out from the cinema shouting, “Where is Roque Baños!” I think the secret to our ongoing collaboration is that we treat each other as if we were actors, enjoying the music we make while invisibly hearing each other whisper to the other how the music should make us feel.

Have you ever thought Alex has gone too far with the sex, violence and overall insanity, especially with THE LAST CIRCUS?

I love Alex’s movies, since EL DI DE LA BESTIA (DAY OF THE BEAST). His films are very passionate and exaggerated, which I love, because I feel the same way about music as he feels about his pictures. Therefore, we are really comfortable working together. We both love the contrast in images and music.

Is Alex as “mad” as his films are, or is he a levelheaded musical collaborator?

His madness is inside him. But in working with Alex, you find a really levelheaded musical collaborator.

You deliberately avoid using “circus” (i.e. calliope) music in THE LAST CIRCUS. How come you didn’t go there where any other composer might have?

Actually, I had that approach to this score when we started, which Alex didn’t like it too much. But I just wanted to discard that option. When Alex heard it, he jumped from his chair and screamed “NO CIRCUS MUSIC IN THIS MOVIE!!!” I was in total agreement with him, because this is an epic-dramatic-love story. The real “circus” music is head during the most dramatic scene of the movie, which has the two clowns fighting up on the giant cross statue. It’s like a dangerous show in a circus, and when that happens in a “real life,” the music had to be very dramatic.

With scores like THE MACHINIST and THE LAST CIRCUS, you can hear your love for, and spot-on recreation of Bernard Herrmann’s style. Could you talk about the importance of his music in your approach?

I love Bernard Herrmann’s scores. But to be honest, I also have training in classical music and jazz for many years since I attended the Berklee School of Music in Boston. So of course I knew Herrmann’s music at that time, but not that much. I really started to listen to his music more often since I heard comments like yours. Now I realize that it’s true my music sounds very similar at times to Herrmann’s style, which is very good for me actually- even if I don’t think about his approach while composing.

I’ve found Herrmann’s music to be incredibly powerful. His themes are “thick”, big, deep and very dramatic. If all that applies to my music, then I feel especially happy.

There’s also a Grand Guignol quality to how consciously “big” your score for THE LAST CIRCUS is at points. Do you think that gets across the black humor of the film?

Of course! As I said before, Alex and I love contrasting and exaggerating, emotion to the very limits that can come from brutal music. That’s very funny for us, so we use it in every movie we’ve made together.

THE LAST CIRCUS might have the mother-of-all people-fighting-on-a-tower ending of all time. Was there any difficulty in scoring a scene where people are consistently dangling over a large drop?

Absolutely, it was very difficult. I had to combine terror, vertigo, love, chasing, all seasoned with despair and madness. But the most difficult part of THE LAST CIRCUS was creating the themes, and then attaching them to all of the emotional combinations that happen during the climax of the movie.

The other major thematic element of THE LAST CIRCUS is its twisted look at attraction and romance. How do your music play into that?

Music, for me, has to show what you cannot see on the picture. It has to always play seriously. We need to believe that the character of Carlos is sick of love for Natalia. He would kill for her, which is why we wanted to get to the limit in terms of drama, love and terror with the music.

The Spanish Civil War plays a big part of THE LAST CIRCUS. How did it impact your own family, and how do you think movies like this come to terms with its legacy in its own twisted way?

All wars are terrible, especially if they are civil wars, because they are friends against friend, brothers against brothers, and even fathers against sons. My two grandfathers fought in the civil war and they always said terrible things about it. I think this movie should touch consciences and make us aware of such horror.

Perhaps the most haunting cue in THE LAST CIRCUS is the piano melody that plays after the climax in “Final Tragedy.” Was it your intent for its relative subtlety (in contrast to how wonderfully over-the-top the rest of the score is) to make audiences realize that what the film’s dealing with is no laughing matter after all?

Could you talk about the pivotal clown song of Raphael’s “Balada De La Trompeta?”

It’s a beautiful song. We didn’t want to use it as a theme for the movie, because we wanted it separate from the rest of the score, to give it’s own identity within the picture.

Your score for THE LAST CIRCUS is exceptionally well produced. Do you think the recording quality for Spanish films is now equal to what you’d find at a Los Angeles session?

Thanks a lot, I produced the score myself, recording it and I mixing it. I believe there are many good orchestras in Europe, so it is possible to get a good recording that could be the equal to an American one.

Alex’s last film THE OXFORD MURDERS was perhaps his most accessible one, as well as his most unsung picture in my opinion- even with its English setting, stars and dialogue. It’s also on my favorite scores of yours. Could you talk about the experience?

It was the most different score I’ve composed for a movie with him. We were looking for a different sound, more elegant and more sophisticated as it tried to get the correlation between match and murder. The use of the harp, combined with the piano ended up becoming our approach to that.

Though SEXY BEAST is a cult film, you’re still awaiting a long-overdue Hollywood studio “break.” What do you think it’s going to take to make that happen?

This fall I’m moving to Los Angeles, where I’ll try to get it. So let me answer that question later when it happens!

Do you think Alex could ever handle a major Hollywood picture, especially given his extreme tastes?

I really believe Alex would make a great movie working in a mayor production in Hollywood. He has an “American” mind when it comes to directing, so no doubts about that.

Your next big genre score will be for THE INTRUDERS, which stars Clive Owen, and is directed by Juan Carlos Fresnadillo of 28 WEEKS LATER. What should we be expecting from the movie, and your score?

What can I say! It’s a great movie, an eerie love story between a father and his daughter. I’ve just finished scoring the film, which has a lot of music at 80 minutes. I’m very happy with it, and hope the movie finds success all over the world. 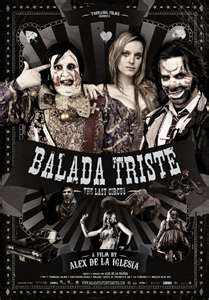 Were you always afraid of clowns? And if so, what do you think your score, and the film, will do to what’s left of their image?

I do not really think it would damage clowns at all. It’s just a love story after all. But then, I was never afraid of clowns until I watched POLTERGEIST, so you never know!

Visit, and hear THE LAST CIRCUS on big screen, video on-demand and CD when Roque Banos and Alex de la Iglesia come to terrorize your town on August 19th