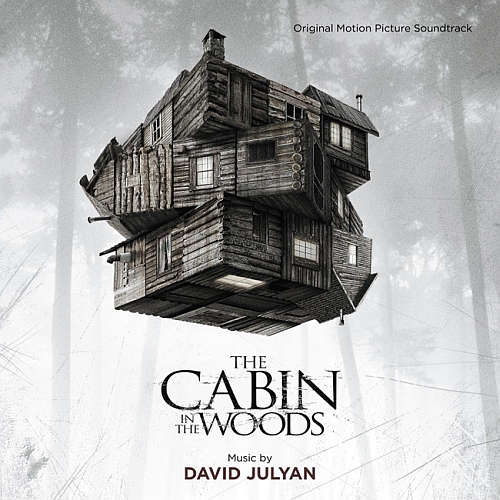 It’s exactly these well-worn tropes that makes our visit to “Cabin in the Woods” into a dazzlingly fresh, and fun movie that’s both terror spoof and the real terrifying deal. For in the hands of “Cloverfield” writer-director Drew Goddard and co-scripter Joss Whedon, familiarity breeds anything but contempt with the kind of meta-horror humor that makes “Scream”’s seem like a whisper. As the topside doings of fresh, young meat are manipulated by blasé, been there-done that technicians down below, composer David Julyan pours on a score that’s vibrantly familiar. Like an accomplished puppetmaster, Julyan’s sinister, brooding approach builds with tense, ever-swirling melody until the shit hits the fan. Thereupon his “Cabin” score becomes a frantic showcase of dissonant shrieking, desperate action and an overwhelming sense of doom that makes “Cabin”’s music pop like a bat out of hell- and then some creatures at that.

But where this kind of relentless approach has made for far more jumbled horror soundtracks as the genre increasingly strays from the old-school melodic scares of yore, there’s a classically-attuned, string-heavy intelligence to Julyan’s increasing mania in the “Woods” that makes for music that’s both satirically part of the instrumental frenzy, while having a coolly detached intelligence that’s far smarter than your typical percussion pile-on. Julyan’s also cleverly played this approach for keeps in his gothic, sinister work for the likes of “The Killing Gene,” “Heartless,” “Eden Lake,” and two creature-filled “Descent” movies, pictures whose characters also came to no good end. In more respectable circles, Julyan’s also atmospherically heightened Christopher Nolan’s mind games for the eerie suspense of “Memento,” “Insomnia” and “The Prestige.” But even when purposefully going over-the-top for “Cabin in the Woods,” there’s a darkly elegance to this Englishman’s work, a sound that’s all about the power of subtle musical manipulation, even when rampaging with the full-blast horrors of “Cabin in the Woods,” a score that’s at one in-joke and as real as a bear trap in the back.

Do you think there’s a quality to your music that makes your particularly suited for “Cabin in the Woods?”

I’m not sure I do. I wouldn’t call it horror film music. Some of it is obviously meant for scares, but the qualities I’m most interested in are what you hear in the more restrained cues, which if I had to label, I’d call dark ambient.

Before even doing “Cabin,” did you notice a certain pattern that horror film plots fell into? 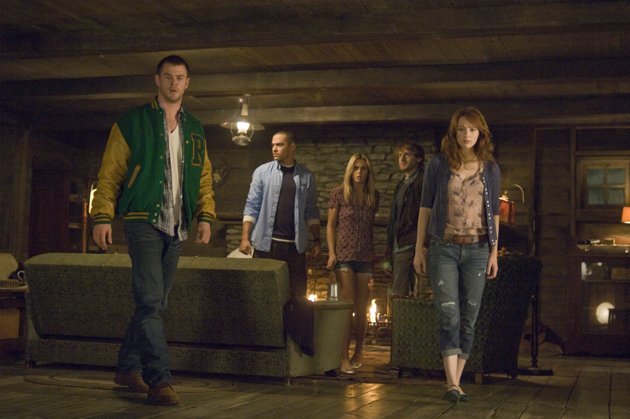 This might come as a surprise to some people, but I’m not that big a fan of horror films. There are some good ones, but I couldn’t say I’ve studied the genre. I’ve seen enough to know the routine. The fact that “Cabin” was playing with the tropes was something that attracted me to the story. It’s something they played with even on the first teaser posters, taglines like “If someone is chasing you, split up!” In fact, that poster is still up on my studio wall.

How did you get a room underneath the Cabin?

Drew Goddard was a big fan of “The Descent.” We first spoke on the phone then I meet him in the cutting room, and here we are. Drew was great to work with, giving me freedom to explore ideas, but always knew what his film needed during the process.

What was you reaction to seeing the film for the very first time?

This may be a good place to say that if you haven’t seen the film, stop reading now and continue once you’ve seen it. I actually read the screenplay before I saw the film, and I loved it, especially trying to figure out what was actually going on. Then through all the guessing, it still managed to get to a twist I wasn’t expecting. I remember finishing the script with a smile on my face thinking, that was bonkers but they made it work. Seeing the film for the first time both confirmed and built on what was in the script. 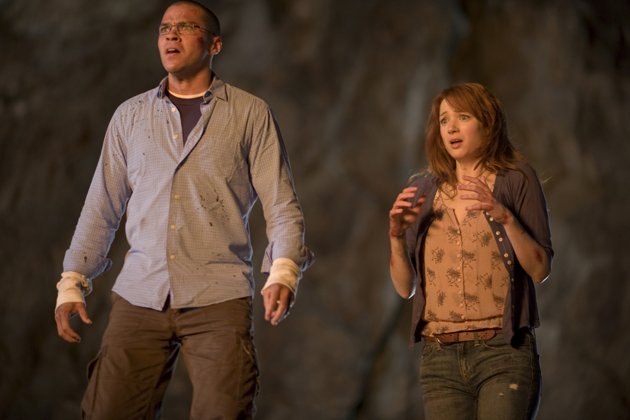 How would you describe the method to this score’s madness?

When starting on a score I’m usually looking for two things, themes and a sound palette. The first point of inspiration is seeing the film and talking with the director. With this film I had a few interesting sounds sitting around for which I wanted to find a home, for example a great sample of a bowed piano which was suitably mysterious and ominous. Then there are sounds that I develop having been inspired by the picture. I did a short session of prepared piano, which I then manipulated in a sampler to give interesting booms, clangs and scrapes. One of the main themes came from Mordecai (the old man at the gas station) as I saw him as the link between the world on the surface and the control room. His theme was a motif on low strings, often mixed with the bowed piano, but then as Dana first enters the cabin and later in the cellar it’s heard as a distant piano, as if his presence as the harbinger of doom is still with them.

You’ve scored some very, very serious horror films. What was it like to finally get one with a sense of humor?

I’m not sure my films are “very, very serious.” There are jokes in “The Descent.” Admittedly they aren’t so laugh out-loud as in “Cabin.” I didn’t want to write a ‘comedy horror’ score. There is only one place where we really score the comedy, the early scene with the one-way mirror. I think this kind of comedy also only works played straight, as this film has a lot of humor referencing the genre. But I think a lot of it is the nervous laughter of fear rather than comedy. 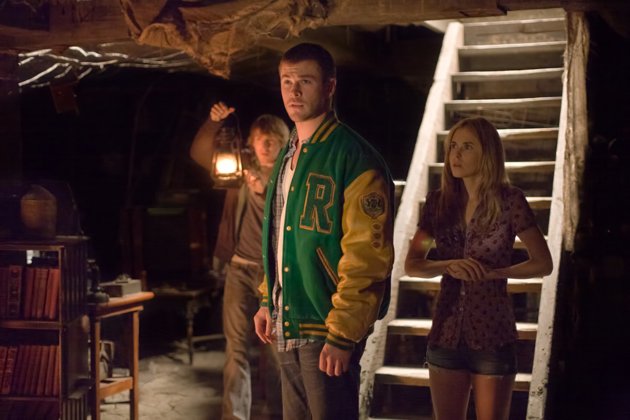 How did you want to convey the difference between the horror up top, and the high-tech down below the Cabin?

Generally in the control room the score is a little more electronic, more percussion loops and processed drones. Again I had a sound I wanted to get into a film. There’s a very creative reverb I like called Rayspace, and it has what I’d call an infinite reverb- well at least a very long one. Lots of the sounds here are things like a single harp note, but through the reverb it becomes a textural wash. The film often builds to a climax up top and then suddenly cuts back to the control room, so that was always me building score and then abruptly cutting to silence. Also down in the control room things are, well, under control.

There’s a particularly clever musical sequence involving the reading of a long-lost book. How did you approach this fateful incantation?

The whole sequence in the cellar is one of my favorites in the film. It’s a very atmospheric moment, one where the film is playing with horror tropes. So with that in mind, I wanted the cellar to be mysterious, almost inviting. There’s no need for the score to tell the audience this is scary because they know the rule- don’t go in the cellar! It was important for the Buckners to have their own theme, brought to life by Patience’s diary. I wanted to the music to feel of a different time, the diary being written 100 years ago, and also to feel sad, although the text is all about pain and torture it’s ultimately a sad story. To score this as horror would be wrong. The solo violin sounds very homely but also sad. Then there is a mix of harmonic string clusters and a processed texture that started with the bowed piano. Their theme is then reiterated on the brass as the whole family rises from the dead.

Did you want to satirize the berserk quality of a typical “crash-bang” horror score here?

I’m not sure what a typical “crash-bang” horror score is, I tend to avoid worrying about what makes a typical score, so I wouldn’t really know where to start in satirizing one. I don’t really like a score that is all loud stings. When we do have our obvious jumps in the score, I like to think they are on scenes that would still be a jump without a loud crash. 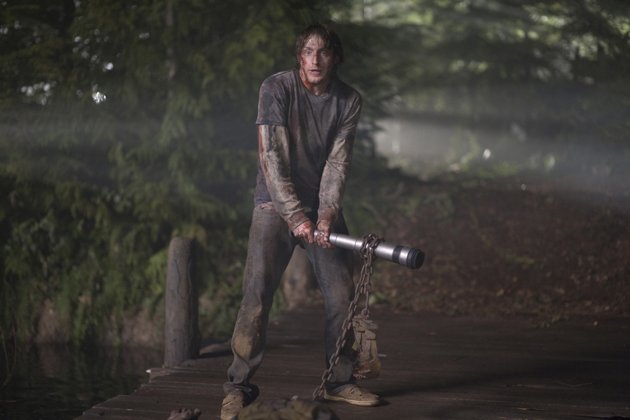 Even as insane as the score gets, do you think there’s sense of classical refinement, and cerebral control to your horror work?

I like restraint in scores, though of course part of the fun of “Cabin” was it had some full-on moments where the music can be really over the top. There’s a lot of score in this film, close to 80 minutes in a 95 minute film, so without some control, I think we’d have battered the audience a bit too much.

An effective horror score can make a character’s death even more terrible. In that respect, did you feel like one of the technicians?

I think it can, but to do so it has to play the sadness rather than the horror. I also tried to do this as much as possible in the work I did on “The Descent” films 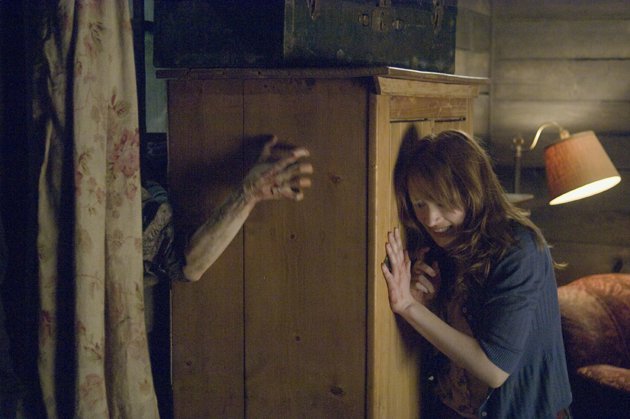 Was there any point where you were worried about the musical shock effects getting too big and relentless, or do you wish you could have even gone further out there with them?

It’s all relative to the film, by the end of the film things get pretty big, but we’d started smaller and mysterious so there was somewhere for the score to go. Also this is where the cutting between the horror in the woods and the relative calm of the control room meant we could go big, and then have a breather so hopefully not too relentless. 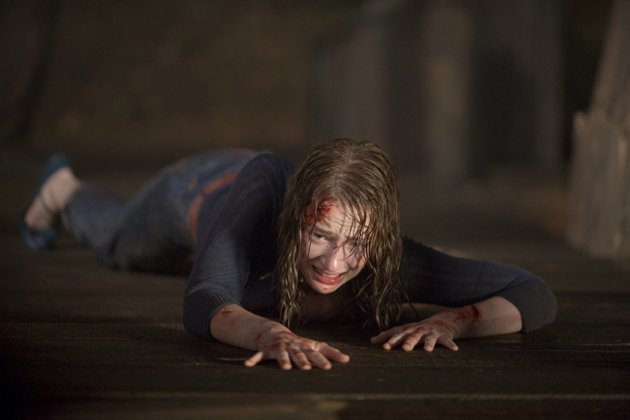 Will it be hard for you to do a straight-up horror film after “Cabin the Woods,” especially ones that fall into the clichés that this one so brilliantly both indulges in, and takes down?

Maybe I’ll always be thinking that Hadley and Sitterson are still down there controlling every scene. I’d like to think they were. 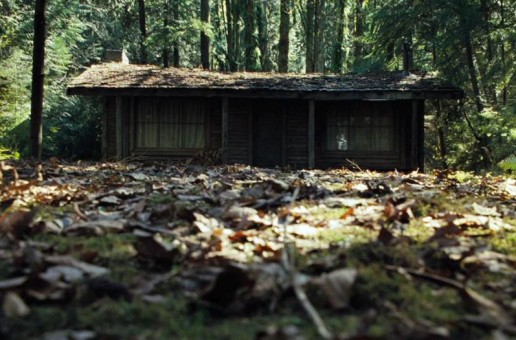