In an indie-centric career spent in the company of such outsiders as the surly, if valiant “Joe,” “Take Shelter’s” doom-obsessed visionary, “Mud’s” rogue on the run and least of all the sci-fi author wannabe of “Gentleman Broncos,” David Wingo has never quite kept eccentric musical company with a guy like James Pope. Kidnapped as a baby and raised in a desert shelter by two eccentrics (Mark Hamill and Jane Adams) focused on math and children’s shows, James’ constant company has been the hit program “Brigsby Bear.” It’s a bizarrely indecipherable, L. Ron Hubbard-esque sci-fi saga for the evolving younger set, its mythos pitting a warrior ursine and the seemingly twin Smile Sisters’ against a talking sun. Except, this serial in fact is only meant for an audience of one. Now freed into a real world he never made, and reunited with his true family, the unfailingly optimistic, frizzy-haired 25 year-old kid struggles to adapt. But nothing can truly be normal unless James completes the saga of “Brigsby Bear” himself, a quest that brings his caretakers down on him while enchanting the neighborhood teens and the internet universe at large in a fictional cosmic saga that puts “Star Trek” to shame.

The enthusiastic saying “Let’s put on a show” truly takes on new meaning for writer (along with Kevin Costello) and star Kyle Mooney and director Dave McCary’s beguiling film. Better known as part of the comedy troupe Good Neighbor, this sorta mix of “The Unbreakable Kimmy Schmidt” and “Pee Wee’s Playhouse” stands as one of the most imaginative and unexpectedly touching pictures this year. Working on any number of levels from the enthusiasm of DYI filmmaking to a “survivor” healing himself, “Brigsby Bear” is suffused with the gentle imagination of Wingo’s sublime, subdued work. 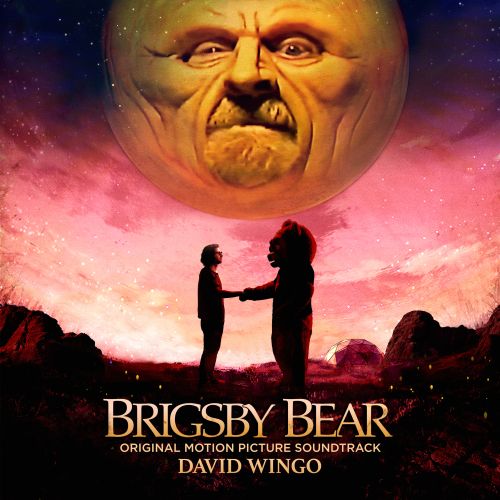 As opposed to musical snark over its bunker-spun puppet and prop imagery, let alone James’ dogged pursuit to construct his own “Bear,” Wingo’s score is often as ethereal as man in the sun starstuff. He thematically captures a yearning sense of imagination, yet with a poignant sense of childhood lost. Delicate piano and guitar over drifting strings become James’ striving to find a sense of purpose, all adding to an unexpected emotional resonance that will likely lead to unexpected tears. Yet “Brigsby Bear’s” score is also aware of the movie’s delightfully insane concept, with retro synths conjuring the perverse, puppet populated time-warped universe that James’ “parents” have created for him – the score culminating as Wingo brings a sense of the DYI epic to “Brigsby Bear – The Movie.” Awash with imagination and heart in its poetically melodic approach, Wingo’s score is a thing of delicate, intimate wonder for what just might be year’s most biggest movie surprise that will make you believe a bear can fly.

What was your impression of Kyle and David’s Good Neighbor comedy troupe before doing “Brigsby Bear?”

This was the first time I’ve ever been approached by people whom I was a huge fan of to begin with. I had no idea that that Kyle and Dave were ever going to make movies, and this ended up being so completely different than what I thought they’d do given what I’d seen from Good Neighbor. Their stuff was more absurd and strange than most anything you’d see on a show like “Saturday Night Live.” It’s really challenging and confrontational in its weirdness. “Brigsby Bear” had a far different sensibility than what I expected to see.

What surprised you the most about “Brigsby Bear?”

I was surprised by how warm, genuine and sweet it was. “Brigsby Bear” was trying to connect in a way that the Good Neighbor stuff didn’t tread, and I loved that. That made it easier for me to do music, knowing that I could actually do something soulful, and that it would make sense with the material. Kyle and David kept this absurd concept well grounded, making something outlandish still feel like the real world. That made people’s reactions to James and the scenario feel believable.

Could you talk about working with Dave and how you found the right tone for the score?

Dave is great. He directed all of that Good Neighbor stuff, and he writes for SNL Scoring “Brigsby Bear” was a pretty fast and furious process. At five weeks, it was the quickest turnaround I’ve ever had on something. I started just before Thanksgiving and had to be done just before the Sundance Film Festival. Though that’s fairly common for independent films, it’s something I’d never dealt with before. But I wanted to do this movie really, really badly, and I said yes. Dave was working on SNL at the same time, so he was really run ragged. But despite that, he was always responsive and was very specific about what he wanted. I was really impressed, because I could imagine how busy he was already. Dave had the ears and the critical thinking to make it happen.

As a child, what were your favorite puppet-filled child’s shows?

Most people who grew up in Dallas watched “Gigglesnort Hotel.” It was filmed in Chicago, but I don’t think it aired in many other places. It was really insane – kind of dark and psychedelic, but not intentionally. The guy who hosted it was Christian, and didn’t intend for it to be as strange as it was! David Gordon Green and I watched it as kids and his dad got a DVD set of the entire series a few years ago. We watched it together and said, “My God, this is still so strange!” Yet I didn’t have that kind of kid’s show music in mind. My score was about playing James’ naiveté. So Michael Montes (“Ping Pong Summer”), a composer I’m a friend with, did all of the “Brigsby Bear” TV show music in the score, especially as we had such a quick turnaround. So I wanted to keep those “scores” separate. They’re coming from two different musical worlds, and I wanted to focus on James, and for the score to feel grounded in his life and emotions. Michael was about the “sci-fi” aspect of “Brigsby Bear.”

Tell me about your “grounded” instrumental ensemble.

But we wanted the score to be cinematic that wasn’t in any way kitschy, but to still have some elements that reflected the “Brigsby Bear” music, since that’s the only music James has ever listened to. So with our small budget, I used sampled strings, while analogue synths reflect the “Brigsby Bear” music through James’ experience. Since David wanted to have something that reminded him of the scores you’d hear in Amblin’ Pictures that Steven Spielberg produced, we used a harp. There’s acoustic guitar as well, which pretty much covers it.

You’ve often scored eccentric, out-of-place characters. Before in movies like “Mud” and “Joe.” How do you think James Pope fits into their repertoire? 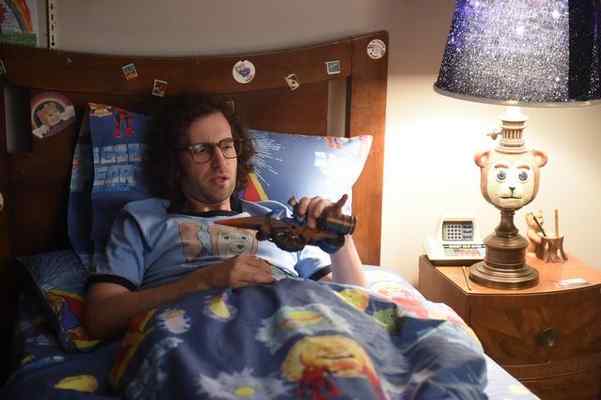 I don’t think that James has much in common with the rest of the films I’ve worked on because he has such naïve innocence. Most of the characters I’ve composed for are tortured or twisted in some way. James is neither of those things. He’s an open page.

Given that you’ve scored some raw comedy in the past, how was it to do something as unexpectedly gentle as “Brigsby Bear?”

I haven’t done most of those broad comedies except for David Gordon Green’s “The Sitter,” so that’s not a world I worked in very much. This was more along the lines of David’s “Prince Avalanche,” which is a very sweet, gentle movie where everyone is sympathetic. The humor is absurd, but nice as people trying to understand each other. “Brigsby Bear” shares that sense of sweetness.

Was it a challenge to play the peculiar magic of “Brigsby Bear” without musically laughing at it?

It was important to us all that “Brisby’s” deadpan humor didn’t need to be played up with the jokey music. I just needed to let the music connect the audience with James so they can laugh at the absurdity of his situation, but not at a this person you empathize with.

How did you want to thematically convey the gentle, always polite manchild view that James carries with him through the film?

The instruments that are very tinkly and innocent help that, and the way that I use the analogue synths are bubbly, and washy as well. I chose simplicity in the chord progressions, as the score relies more on sonics than compositional sophistication.

There’s a whole other, awful level to “Brigsby Bear” about the pain of separation and the madness of James’ “parents” that’s stunted his life. Did you want allude to that darkness?

The music does get fairly dark and serious when James drives out to find The Smile Sisters and returns to his old bunker. But the writing and performances don’t let you get bogged down in that darkness, mostly because James doesn’t get bogged down in it either. At the end of the day, he’s adjusting to real life, and he’s optimistic about it. You always feel that James is going to be ok. It’s shown that James’ abductors care for him, and are not abusers. So he still feels fondness for them. That’s very ballsy to write the characters like that, because a lot of people could think that’s taking too many liberties with what they’ve done to him. But I love it because the movie doesn’t demonize these kidnappers. It looks at them through James’ eyes. 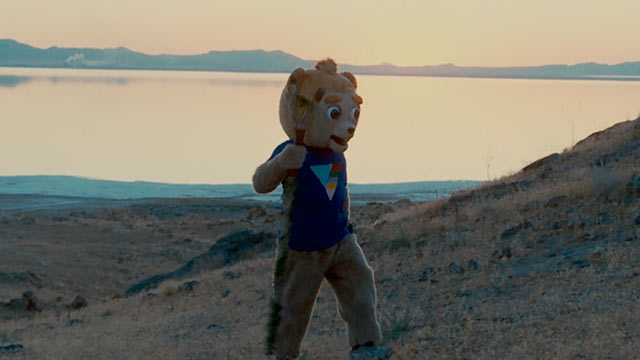 Could you talk about scoring the “Brigsby Bear Movie” that James creates, and giving it a sort of epic scope?”

I had to work on that cue the hardest because it was the one that had to be right. We had a lot of iterations of it to be sure. It was a matter of riding that line between sentimentality and grandness – yet without feeling too triumphant.

“Brigsby Bear” has quite an unexpected, emotional wallop at the end.

A lot of people say that, which is why we did so many versions of the ending score. Dave and Kyle called the shots to get it to that level as much as it could, to let the piano and harp do something more. They were instrumental in being hands on to fine-tuning the score to where it was emotional, but not too much.

What do you think that “Brigsby Bear” has to saw about the power of art, and creativity to heal all wounds, even the ones that James might not realize that he has?

I think that’s what the movie’s sort of about at the end of the day. I’ve seen some reviews that are calling it a critique of fan culture, which I can see. But to me that’s not what “Brigsby Bear” is. To me, it’s far more about how much the world can open up, not only when you start creating, but by doing something that you don’t know how to do. It’s the complete rush of being a beginner and learning how to express yourself and create things. That makes the world open up to you. 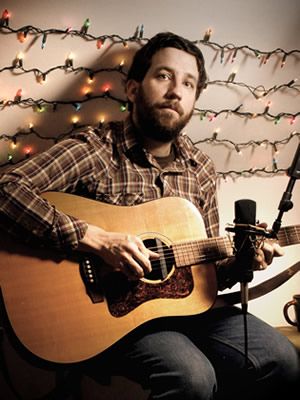 Do you think “Brigsby Bear” has a big cult destiny ahead of it?

I think it certainly has that potential. I’d certainly say “yes” if I hadn’t worked on so many other things that I thought would become cult movies, but didn’t develop that way. But this seems like the kind of movie that could, and should. “Brigsby Bear” is certainly among my favorites of anything I’ve scored. I hope it has a life that continues well beyond its initial release. I think people will discover “Brigsby Bear.” So far people are connecting to it in a way that makes me really happy.