Ilan Eshkeri is a composer who knows his way around costumes, be it past or present. Starting his scoring career in England swinging a gladiator’s sword for two TV movies about the Coliseum, Eshkeri has fitted on the blood-stained mob business suits of “Layer Cake,” provided a rousing fantasy score for the eccentric wizards and air pirates of “Stardust,” elegantly showed that “Young Victoria” had sex appeal, helped apply the battered spandex of “Kick-Ass” and returned to the valiant last legion of the Roman Empire’s “Centurion.” But whether the era demands a score that’s humorously enervating or bold and bloody, Eshkeri’s music has often shared a deep empathy for characters who can only hope for a blissful romantic destiny, especially in this stylistically varied year that started out with the raunchily comedic wedding dress of “I Give It a Year” and the cheerfully classical, corset–obsessed Westworld called “Austenland.”

Now 2013 ends as Eshkeri plays the rich wardrobe that reflects the musical hemispheres of East and West, united their characters’ pained quests for love with a score that’s sumptuously epic, and the other intimately anguished. The first score for “47 Ronin” represents Eshkeri’s true jump into a Hollywood tentpole. Having dealt with even more ferocious Asian action in “Ninja Assassin,” Eshkeri’s more elegantly lethal music has helped Universal Pictures’ long-delayed, mega-million dollar Asian fantasy-action spectacle finally cross the finish line in rousing style. Given the emotional center of the impossible love between outcast Gaijin super fighter Kai (Keanu Reeves) and his dishonored warlord’s daughter Mika (Ko Shibasaki), Eshkeri conjures a memorable theme for the duo amidst an exciting, lavishly symphonic approach that palpably creates a feudal Japan of black sorcery, mythical beasts and the to-the-death code of its rootless samurai avengers. It’s a soundtrack that sings with as much sword-swinging thematic honor as it does eerie darkness, tonally enhancing its ethnic winds and pounding drums with only the kind of majestic orchestra that can properly out a 3-D effects and action blockbuster of this Xmas type. 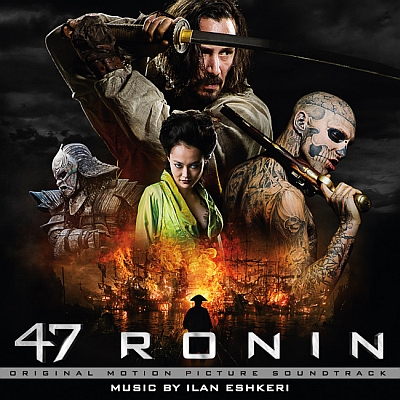 Far smaller in scope, but just as dishonored on the inside of its fine lacery is “The Invisible Woman,” which reunites Eshkeri with Ralph Fiennes after his barbarically percussive score for the actor-filmmaker’s modernized adaptation of William Shakespeare’s “Coriolanus.” The very much present author here is Charles Dickens, a writer renowned for social justice and charity, yet who finds himself constricted by English morays from giving recognition to Nelly Ternan (Felicity Jones), an aspiring actress who takes on her greatest, and completely unacknowledged role as the love of Dickens’ life. While one might expect a lushly melodic score on the order of “Austenland,” Eshkeri instead takes an anguished, chamber music approach for a silently tormented, but very much lovestruck heroine as she tries to find her own voice outside of mutual obsession. It’s a subtle, effectively jarring score that’s anything but ladylike, a modernistic approach to period music that distinguishes this deeply felt movie. 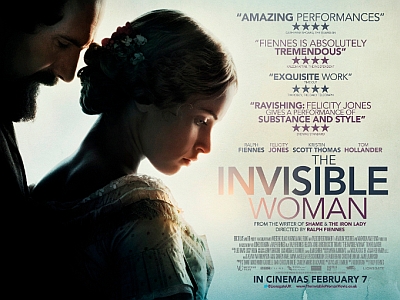 Now, Ilan Eshkeri talks about creating impressive music for art and commerce, with “47 Ronin” and “The Invisible Woman,” characters that yield exciting and emotional results that continue building upon Eshkeri’s impressive talents.

Were you a fan of samurai movies, or aware of the legendary story that “47 Ronin” was based on before doing the film?

Yes, absolutely. I trained in Aikido for quite a few years in my 20s, so as a result of that, I’ve had an ongoing interest in that part of Japanese culture.

How did you ascertain what kind of approach would work for “47 Ronin?”

“47 Ronin” is a fantasy epic told in a Hollywood style. Even though it’s set in Japan it is very much a modified fantasy version of Japan. Naturally the film needed some Japanese elements to evoke the atmosphere of what we’re seeing on the screen, but it needed to be underpinned by a Hollywood fantasy score.

What are your other major themes in the score?

Because the number 47 is really important in the film I wanted to see if I could weave numerological significance into the fabric of the score. So, for example, the opening two notes of the Ronin Theme are a 4th and a 7th above the root. Also chord 4 followed by chord 7 is a repeated motif, when a character commits Seppuku. The love theme for Kai and Mika is a duet for Shakuhachi and solo cello. The cello is performed with an orange or a tennis ball in the left hand by Caroline Dale. This technique not only creates a swooping sound, giving it an Asian feel, but also affects the tone of the cello. The love theme reprises with a full orchestra at the very end of the movie when Mika stands on a bridge, which is a moment I really love.

What role did you want percussion to play in the action sequences, and did you turn to Japanese instruments for it? 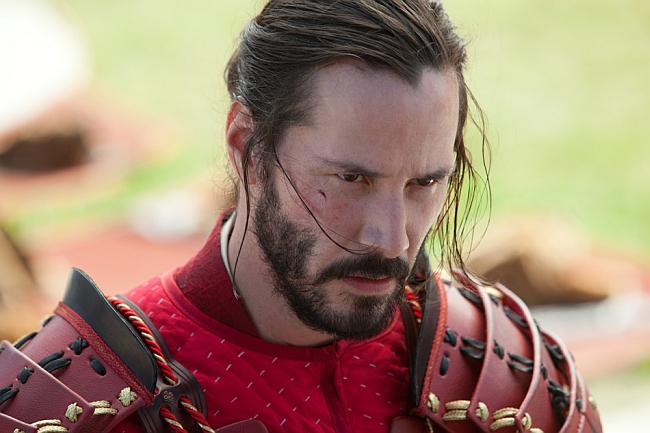 Naturally I wanted to turn towards taiko drums and we did use plenty of them, along with bass drum and the epic Verdi bass drum. We had to keep the drums quite simple in some of the action sequences because in the Kirin Hunt, for example, there are so many galloping sound effects from the Kirin’s hoofs and the horses hoofs that any complex percussion would have fought the effects and sounded confusing. Higher pitch drums weren’t really an option, as we don’t associate them with that part of the world.

Tell us about writing the fully Japanese “source” music in “47 Ronin?”

I worked with a wonderful Koto player and a fantastic flautist. Their expertise in Japanese folk music helped guide me. There is very little traditional Japanese music in the score and we only needed to be subtle with it to evoke enough of the Japanese atmosphere.

Could you talk about your approach to the black magic that the villains wield in “47 Ronin?”

I wanted to play the witch with female vocals. She has quite a strange long descending melody, sometimes over a pedal tone but also sometimes with a series of chords when it needs to be more dramatic. I wanted to evoke her transformations with the choir as well and became interested in this idea of pivoting around an axis note to its retrograde inversion through multiple glissandos. It sounds complicated but basically some voices would slide a lot, some voices would slide a little but one note would stay constant. There is a picture of my hand written score of this somewhere on my twitter feed!

When so many effects-driven scores incorporate a “pop” aesthetic, was it particularly satisfying to mostly use an “old school” orchestral approach to “47 Ronin.”

Really, the only old fashioned thing about the score is its use of bold melodies throughout. The score is in fact very contemporary in its use of low-end weighted strings, large brass but few trumpets and no woodwind, a lot of percussion and a lot of electronics. I love old school style Hollywood scoring and have done a bunch of it but this is not one of those scores.

Earlier this year, you did a rousingly humorous classical score for “Austenland.” Was it fun to satirize that kind of “costume” classical scoring, while also empathizing with the era’s romantic attraction for so many Jane Austen fans?

The film was very funny. But as is so often the case with these types of films the music had to be very straight. The job of the music in “Austenland” was to express the genuine and serious emotions that the characters felt despite the funny situations they found themselves in. The score needed several different themes: something that evoked Regency era pomp, a love theme, a waltz and a seafaring theme. As I was writing I realized that these were the four parts, in that order, to a traditional symphony: movement I in sonata form, II slow movement, III a minuet and trio, IV a rondo. I worked with my friend Emmy the Great, a supremely talented British artist, on songs for the film.

Your latest costume drama is for Ralph Fiennes “The Invisible Woman.” What sets it apart is an anguished, cello-heavy approach that what you’d expect for a movie like this. How did you hit on it this chamber music style?

The film is a story about a man and a woman and early on we decided to write the music as a duet. Dickens is the violin performed by David Juritz and Nelly is cello performed by Caroline Dale. I’m proud of it because the music is quite unusual for a film, it is mostly very quiet and reserved, but then has these huge explosions of passion. It was difficult to find ways to play these epic emotional scenes with just two instruments where you could easily have used a 60 piece orchestra, and the style of writing I used was extremely virtuosic so it was very difficult to show Ralph what I wanted to do with the music without working with the musicians in the room. So that’s what we did, we worked on the score for weeks with the violinist and cellist, which was an unusual but inspiring process, and created wonderful results that I’m very proud of. 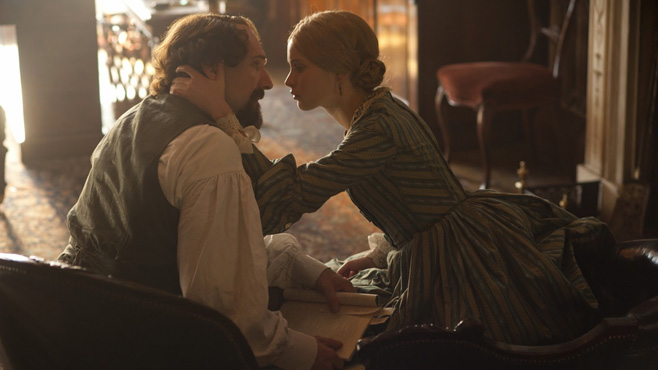 How would you describe Ralph’s musical tastes as a filmmaker? And do you think his more renowned work as an actor sets him apart than just working with a person whose art was solely contained to directing?

Ralph is a very inspirational director. He is able to do the impossible thing of giving you a very clear defined direction whilst allowing you a tremendous amount of creative freedom. It is often a challenging journey but I trust his taste and when we get there it feels really right and good. Both “Coriolanus” and “The Invisible Woman” is some of the work I’m most proud of.

Do you hope to continue working in both worlds as a composer of effects-heavy Hollywood blockbusters, as well as character-oriented English “art” movies?

Yes, I love the different challenges that these different kinds of projects bring to me as well as continuing with my concert work and work in the rock and pop business.