America might have its upstart, sparkly rock-and-roll vampires. However in Europe the cinematic myths surrounding these creatures tend to be somewhat more romantically sophisticated, encouraging their scores to be similarly cloaked in poetic refinement. It’s a crimson wellspring where Intimately Baroque instrumentations conjure images of corseted eroticism and raging orchestras relish in unholy evil, all while a chorus simultaneously evokes the undead’s transgression against God, and their impossible dream of returning to his good graces. With his music’s striking mix of tenderness and savagery, Javier Navarrete takes on feminine, melodic shape to tap into the jugular of time-honored vampire music in “Byzantium,” doing so in thrall of a film that brazenly defies “the rules” along with its two heroines.

“Byzantium” marks filmmaker Neil Jordan’s return to these iconic monsters nearly two decades after his epically rapturous adaptation of Anne Rice’s “Interview With the Vampire.” However, Jordan takes a more emotionally intimate, and visually striking approach this time in depicting the mother-daughter blood ties of Clara (Gemma Arterton) and Eleanor (Saorise Ronan), both victims of a male-ruled society that have turned their transformations into the ultimate example of Grrl Power. One woman uses sex as a weapon for survival, while the other tries to achieve some sort of personal morality in only taking mortals who desire deliverance from too long a life. Leading their hardscrabble existence over two hundred years Clara and Eleanor are always in fear of the chauvinistic vampire order that created them, and now seeks to keep the bloodline exclusively in their eternal men’s club.

As Jordan seamlessly segues through the years with Eleanor’s gently sanguine storytelling, “Byzantium’s Spanish composer creates a haunted, classically-accented tapestry, whose contemporary, garter-belted fingernails are displayed by sharply buzzing samples and electric guitar attacks. But then, Navarrete is exceptionally well suited for “Byzantium,” having not only evoked a delicate sense of theme-driven tragedy for a host of supernaturally-afflicted adolescents (perhaps most popularly for his Oscar-nominated score to “Pan’s Labyrinth”) but also a talent for playing star-crossed historical romance in his Emmy-winning soundtrack for “Hemingway & Gellhorn.” Now “Byzantium” takes Navarrete’s often gracefully dark gifts to new heights for another Neil Jordan vampire classic, mesmerizing us with an elegantly spellbinding sense of empathy for a sisterhood of the undead. 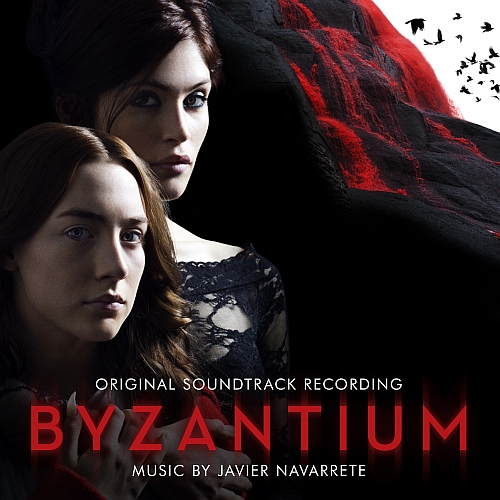 A lot of your genre scores like “Pan’s Labyrinth, “The Devil’s Backbone,” “The New Daughter” and “The Hole” deal with young, cursed characters. How do you think “Byzantium” fits into that scoring trend, and do you think it’s what drew Neil to you?

Scoring movies about young and cursed characters might be my Karmic lot! But I don’t complain about that, because the ones I get to work on are so lyrical. Eleanor from “Byzantium” is an incarnation of a beautiful philosophical paradox, as she’s come of age during two hundred years!

What kind of musical expectations do you think vampirism brings with it? How did you want to do something unique, yet pay off the more traditional role of a “horror” score?

Vampirism goes far beyond horror. It brings the idea of immortality and, most often, the promise of love eternal. All of this requires lots of empathy, of romanticism. You may see a wolf man as a beast and consequently play just some beastly dissonance. But vampires deal with immortality. Music has to show some echoes of their transcendence. However, the price vampires have to pay to be immortal is feeding on other human beings’ blood, and that is where the horror comes onto the musical scene.

Tell us about your collaboration with Neil Jordan. How did his films strike you before starting on “Byzantium?”

It’s been fantastic. I admired Neil’s movies from ‘The Company of Wolves’, which I saw immediately after its release. It was a new view on the genre, which for the first time incorporated complex avant-garde ideas, pictures and sounds into the frame of the classic children’s tale. I’ve always felt that I had some kind of intimate link with Neil’s films since then. I was finally introduced to him by my good music editing friend Michael Connell, who helped Neil gently accepted me for “Byzantium,” especially since he knew of my other credits with similarly cursed characters. Now I’m very happy because I’ve not only scored a Neil Jordan movie, but I’ve also become his friend.

How did you want your score to reflect the relationship between Eleanor and Clara? 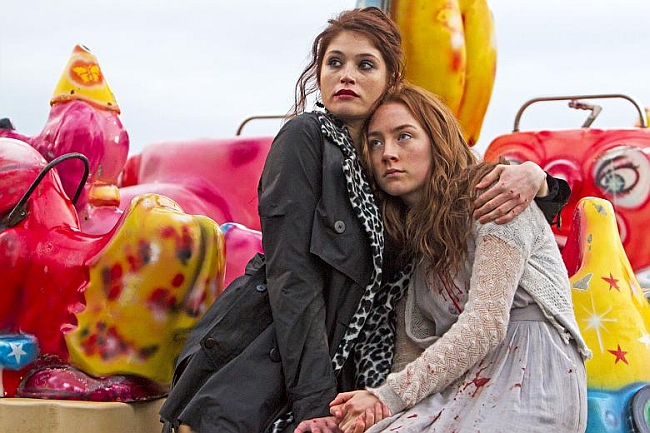 Clara is a very basic personality, and doesn’t seem to care about the past or the future. Eleanor, as the adolescent she is, is always questioning where she comes from, which is why her music is so poetic.

Tell us about the contrast, and the flow between “historical” and “modern” music.

The movie plays constantly with two periods: current times, and two centuries ago. So it was quite clear to me that we should set very distinctive music for each time period. We played with electronic sounds for the present time, in which the characters live in a very realistic way as they struggle with their day-to-day needs for survival. That music is contrasted with the classical orchestra for the past, which has lots of grandeur.

How did you decide on Beethoven’s Piano Sonata Opus 2 for Eleanor’s piano solo? And how did you want to build off that classical tone for the score? 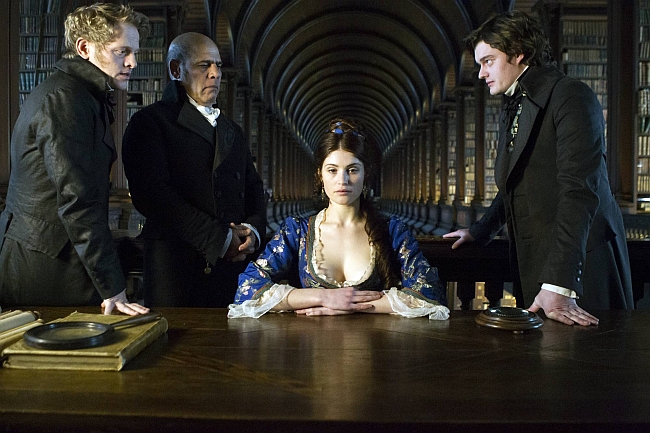 It was Neil’s choice, way before I arrived to the project. I think he actually had that idea from the very beginnings of “Byzantium.” And it was an excellent choice, because that movement of the sonata has a powerful rhythmic and harmonic groove, with not much melody. So it’s perfect to support her narration on top of it. The music really sounds like a narrative by itself. I thought it would be interesting to use the Sonata as a starting point for all of the ‘classical’ music, going back to the actual Beethoven piece when it was required, mainly as a reminder of Eleanor’s particular choice in how she tells her story.

“Byzantium” is an incredibly thematic score, driven almost by one central idea. How important was a melodic approach to you here, and do you think melody is something that should be heard more often in horror scores?

I found it easy to do it that way, because other than the sonata, there was a traditional Christmas Carol that comes here and there to bring in a nice choral voice. In contrast, we used electronics, piano, electric guitar and viola for the contemporary period, using also the choir, but in a very dissonant way when blood appeared. The contemporary theme is quite simpler and spare, as is, I believe, contemporary music, compared to the very dense music of Nineteen Century. But still the score is recognizable and melodic. I believe it’s easy to have melodies when we have true characters in a movie. You play some melodies and one of them just fits. So I think we should have a more thematic approach in horror movies when there’s actual characterization. There’s no way I’m going to get scared if I don’t feel empathy for the people in a horror movie.

There’s also particularly striking choral work in the score. Did you want a “religious” feeling as well to “Byzantium,” even though the movie itself doesn’t have that kind of crucifix-driven iconography? 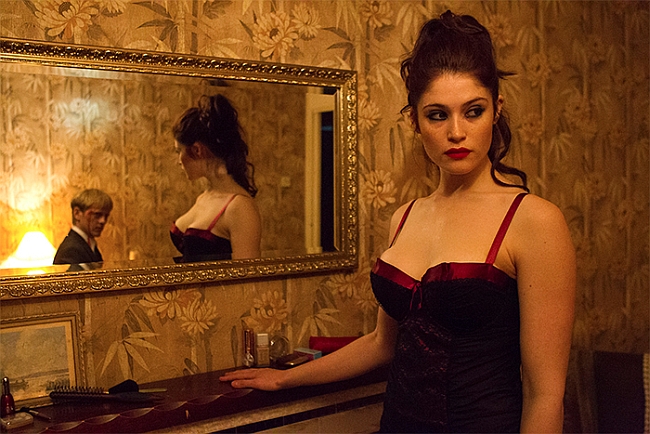 I think the carol links more with the education of Eleanor in an orphanage, and the evocation of those times gone long time ago, than with a religious iconography, which is certainly absent from the movie.

In that respect, is it more challenging to score a vampire film that doesn’t play by the traditional vampire “rules?”

It’s really much better. I don’t see much interest in following the “rules,” and I’m not sure I’d even sure I’d know how to do it, since I never had a formal training in composition itself. Movies have some kind of soul, or they don’t. Composers, as do the actors, perform very simply as mediums to get down this magic plasma. We all go through some struggle in the creative process, but that’s not very relevant.

For a vampire tale about girl power, how did you want to reflect the characters’ femininity, as well as savagery? 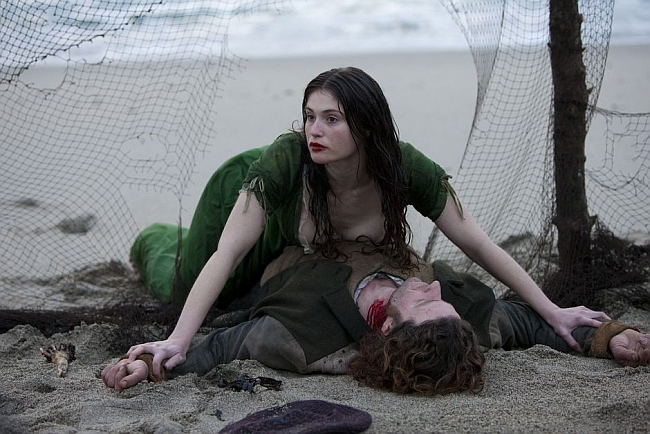 That’s interesting. I always think on my favorite music as kind of feminine, going by the minor modes and all that. These ladies in the movie behave in a very compassionate way. Clara kills undesirable or abusive men, while Eleanor helps the ones who are in hopeless suffering to end their days peacefully. Because we feel sympathetic with these characters, we want this somewhat weird music to be on their side. But there are other vampires, chasing them, and they can get quite violent and the music, hopefully, reflects this by displaying their madness and darkness.

Could you talk about the eerier, sharper musical effects you use in “Byzantium?”

I used a number of electronic sounds from one or two well-known sound libraries, without even editing them, always playing them in very extreme registers or in unusual ways. I made a weird bass out of it, and vice versa. That’s probably why it can get quite “sharp” at moments.

Would you like all of your genre films to be as elegant as “Byzantium,” or do you like to work on more visceral horror films as well?

I like my horror movies to be elegant, definitely!

Where kind of route do you see vampire films, and their scores taking in the future? 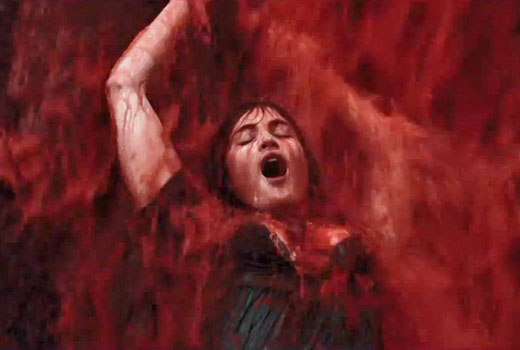 I would watch a vampire movie every month, or every week, if they were good enough, so I hope they continue making ones as good as “Byzantium.” I believe this last wave of vampire movies has given us some great ones, along with a number of mediocre ones. My guess is that the genre is going to be periodically revisited, and obviously changed. Their music will follow that. As you noted, there is no religious iconography involved in “Byzantium. It’s also worth it to note that Neil’s vampires don’t become richer or happier after living for two hundred years. They just follow the flow of life, with all of its ups and downs. I love that about the film.

“Byzantium” opens in theaters at the end of June. Javier Navarrete’s soundtrack will be released this summer on Silva Screen Records HERE