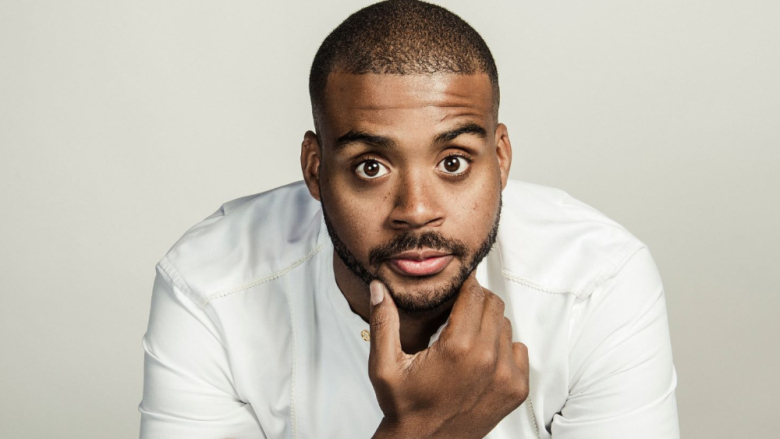 From “Rocky” to “Rudy,” there’s a formula to a great underdog, zero-to-hero sports film as players raised from working class beginnings impress their respective competitive worlds’ movers and shakers. What makes the almost impossibly true story of Serena and Venus Williams particularly notable is that their father, nicknamed “King Richard” for his seemingly grandiose ambitions, had that formula down for his children since their birth. For sports fans and movie audiences who love it when a plan comes together, Richard Williams’ ironclad calculations not only delivered tennis legends, but also one of the bigger wins the sports movie genre has had in some time.

Given the specific demands of telling sports stories often spanning years in the space of two hours (and in this case a lightning fast 2 ½), it’s vital that any sports film is emotionally and energetically coached on by a composer equally adept at their craft. Now fresh from holding basketball court with the Looney Tune energy of “Space Jam 2,” composer Kris Bowers goes way more down to earth to join the tennis scoring ranks of such pros as Jerry Goldsmith (“Players”) Jerry Goldsmith and Nicholas Britell (“Battle of the Sexes”). That Bowers and the film by his “Monsters and Men” director Reinaldo Marcus stands to become the biggest tennis movies ever says everything about the power of a new generation arriving at court. Yet it’s the old school orchestral power of Bowers’ delivery that makes “King Richard” sing in exactly the emotional way that brings an audience to its feet.

For a film that takes a real-life lesson from “Rocky” in being about the power of an underdog taking stock in themselves no matter the seemingly mismatched outcome, “King Richard” works equally well off and on the court. With military precision, Bowers’ captures a father’s all-consuming plan for its victories and familial faults, while reflecting the black pride dreams and self-determination it inspires in his daughters, who will grow to take stock of their own worth and dollar value. With classical rhythms capturing the fun of smacking down the low expectations of the predominantly white world Richard, Venus and Serena have to convince, Bower’s music also gets to the warts-and-all heart of a beyond controlling dad. Like his female-centric scores for Aretha Franklin in “Respect” and the feminist warriors of “Mrs. America,” Bowers’ fine control of his symphonic instrument creates a sense of unbendable women’s place in history. All musical roads here will of course lead  to The Big Game where Bowers nimbly keeps pace with the peaks and valleys of victory and defeat in what might be the showcase of an already accomplished scoring and recording career, one that just keeps jumping higher off the ground as it’s powered by a similar sense of daughters’ destiny.

Were your own parents determined that you’d become a musician, or was that a career path that you solely pursued?

My parents decided before I was born they wanted me to play piano after my dad was emotionally moved (surprisingly) listening to a piece of piano music. From the very beginning, they did everything they could to find the best music educators and institutions they could send me to.

Way before you’d score “King Richard,” did you follow the Williams sisters as a sports fan? And what struck you about them as tennis players and siblings, both individually and separately?

The only reason my parents started watching tennis in our house was because of Venus and Serena. So they were always iconic in my mind. I was always impressed by the way they radically changed the game, and how much pride my family had in them being black women.

“King Richard” marks your second teaming with filmmaker Reinaldo Marcus Green after “Monsters and Men.” Could you talk about your first collaboration, and what it was like to now be playing at a studio level together.

Rei and I worked intimately on “Monsters and Men” and developed a collaborative relationship grounded in trust and play. I always felt safe to try anything, while having a clear direction from him on emotion, perspective, character, etc. Working on “King Richard” with him felt like a natural extension of that process.

You’ve been on a roll scoring real, iconic female “characters” from “Mrs. America” to “Respect” and “King Richard.” What’s the trick to doing that from your male perspective, and was it perhaps easier in this film’s case as it’s driven by a father’s determination?

With all of these projects, it comes down to following the director. There are times where I may be off in terms of whose perspective we’re looking from and/or how we should feel the emotion. Having conversations with the filmmaker (along with the editor and/or whomever else is a part of the team) about whose perspective we should be looking at the moment from and how we’re supposed to feel in each moment always leads me down the best path for the film/story.

How important was it for the score not to lionize Richard, but to portray him as a greatly flawed person?

The great thing about this project is how brilliantly Will captured Richard and how well the film portrays the complex aspects of his character. So, writing for whatever the film is calling for in every moment naturally led me down that path in portraying Richard.

What kind of instrumental, rhythmic and often dream-like “shoot for the stars” approach did you want to give to the score?

From the beginning, I decided to use an instrumentation that reminded me of the sounds of the game itself: strings, piano, harp, prepared piano and percussion. Also, during the gameplay, it was incredibly important to me that the rhythm of the game felt like it was accompanied by the score. Using hits in the sequences as musical punctuations became a great way to emphasize the progression of the game.

Talk about playing the military-like drive that Richard has for his “plan.”

The snare drum is introduced in the very first cue when we meet Richard to reflect that “military-like” drive he had.

You could say this is your second “sports” film of the year after “Space Jam 2.” What’s the biggest difference between capturing the games of basketball and tennis?

Other than the two films having a very different sound palette, interestingly, the similarity with the two was scoring the games in a way that tells us how our protagonists are doing in the game without having a commentator consistently keeping score. Therefore, we’re reliant on the score to understand who’s winning, losing, etc.

Whatever the competition, what do you think makes a great inspirational rags-to-riches “sports” movie, and sports score? And what are some of your favorites in the genre and why?

My favorite “sports” movies are really intimate portrayals of people, families and/or human relationships. Some of my favorites are: “Raging Bull,” “The Fighter,” “I, Tonya,” “Remember the Titans” and “Ali.”

It really seems that that two arenas that everyone can root for everyone in are music and sports. How do you think “King Richard” and its score cut across barriers in that way?

I really just hope that people connect to this family and their story of hard work and perseverance, and the score (and the tennis) are just a vehicle to tell that story.

Black pride is an important part of the film. How did you want to reflect that while not engaging in the kind of “black” score cliches you might hear in other soundtracks?

I knew I wanted elements of hip-hop in terms of rhythm, but I wanted to keep the palette as organic as possible as opposed to introducing produced/electronic elements.

There’s a classical aspect to the score when Venus makes an impression on the “country club” tennis circuit. Did you want to have fun with the idea of them entering a world of high society that reacts with astonishment to their talent?

Yes. Some of my early conversations with Rei were about how we might use the score to highlight the fact that these young black girls are operating in a space where some think they don’t “belong.” Having a more traditional approach felt right in moments to help that.

The score really shines in the final big game between Venus and Vicario. Could you talk about approach such a long sequence to play the emotional volleys, especially when it comes to the idea of winning in a seeming loss?

That last match is almost one really long cue. Pam Martin (the editor) did such an incredible job of crafting the sequence in a way where we know how the game is unfolding even without the help of a commentator. So, my job was to match and accentuate that unfolding. The prepared piano becomes a prominent part of the score in this last match as the rhythmic motor that we’re hearing.

I imagine that “King Richard” was scored later in the pandemic. Do you think the process of dealing with these recording challenges has gotten easier?

Definitely. Luckily we were able to record this score all in the same room here in LA at Warner Bros. I’m very thankful for that.

I really enjoyed the concluding chapter of “Dear White People” on Netflix. Could you talk about your time on the show, and how you gave it a “musical” send-off?

Justin Simien had always wanted to make a musical and so it just felt right for him to send off these characters in that way. We had a fun time recreating a 90s sound for the season and I had the chance to write an original song “All Together Now” with the amazing Siedah Garrett.

Are you surprised by the enormous hit that Netflix’s “Bridgerton” became, and what can we expect musically for the upcoming season?

Incredibly surprised! For the next season, we’re able to dive into new character themes and develop some of the themes from season 1 in a new way as we see these characters and stories develop.

Do you think you’ve helped take the role of black composers into a new color-blind realm when it comes to the kind of projects they’re being given – not to mention way more work in the bargain?

I’m not sure how I’ve helped, but I’m very thankful to be a composer in a time like now where I can really feel and see the efforts made by the industry to diversify in an intentional and thoughtful way.

How do you hope that “King Richard” and your score for it inspires the next Williams sisters, or a parent who wants to take their kids on that kind of course – no matter what kind of career it might be?

I hope that this helps someone out there see and understand that in order to be great at something, it takes incredibly hard work and as much support as you can find. The Williams sisters weren’t simply born great. They worked at it and their family sacrificed and did everything in their power to help them get there.