We might primally root for him to take down a bunch of barbaric English yahoos. Yet as Sam Peckinpah’s violent parable STRAW DOGS more than pointed out in 1972, there’s little glory to be had by a seeming milquetoast in the middle of a home invasion. You could imagine the same reaction of a composer tasked with re-scoring the action that Jerry Fielding so memorably wrote for that iconic picture. But like the broken-spectacled mathematician who proves himself a he-man in the face of impossible odds, Larry Groupé weathers the potential brickbats, boiling oil and bullet to successfully score his own take on STRAW DOGS. The occasion forty years later is for a freshly provocative version of Gordon Williams’ novel “The Siege of Trencher’s Farm,” which transfers the savagery from coastal Cornwall to America’s deep south- a place with violently lusting rednecks aplenty. It’s fertile territory for writer-director Rod Lurie to stage this remake, placing his favored composer straight in the do-or-die bull’s eye with him.

However, it’s not like Larry Groupé isn’t used to being put in controversial spots with Lurie through any number of the politically-themed television shows and films they’ve done together, including the presidential crises of DETERENCE and THE CONTENDER, a reporter being jailed for outing a CIA operative in NOTHING BUT THE TRUTH and the contrasting of an FBI agent and a mobster in LINE OF FIRE, whose music received an Emmy nomination. Yet the sexual assault of a screenwriter’s wife by a bunch of white trash is a whole new bear trap for the duo, especially in a time when the shock value that DOGS helped pioneer has become the rage. However, few scores still have plumbed the psychological depths that Jerry Fielding discovered with his queasy fusion of dissonance and melody, topped off with a trumpeting quality that didn’t so much suggest an English fox hunt as it did a human one.

While Larry Groupé’s score might not go for this kind of abstract brazenness, it’s a tautly thematic exercise in escalating suspense, the music of local yokel pleasantries and teasing sexuality ultimately growing into something snarling, savage and darkly heroic as the notorious attack arrives again. It’s a thrilling showcase for Groupé to goes balls-out with some of the coolest, raging symphonic vengeance to be heard since Elmer Bernstein re-tackled Bernard Herrmann’s home invasion score for CAPE FEAR. And therein lies the brooding charm of this STRAW DOGS that pays homage to an unrepeatable classic while letting Larry Groupé go his own, melodically twisted way.

What was your reaction to the original STRAW DOGS that you saw it, especially to Jerry Fielding’s score?

I have seen the original two times in past, but deliberately did not view it again when this project was officially green lit. So it has been some years since I have seen Peckinpah’s STRAW DOGS- not have I seen the original since I finished. But I do know and love the Jerry Fielding score and I can guarantee you there is absolutely no connection to my score and his. There are several reasons for that but the main two were that I wanted to do something original, and not reminiscent of his score, because our two pictures are very different films. The requirements of this STRAW DOGS were inherently going to be different.

There’s bound to be controversy when anyone remakes a classic of STRAW DOGS magnitude. What did you think when it was announced, and what do you think a remake could bring to the material that wasn’t there before- let alone musically?

That is a “Loaded” question- STRAW DOGS pun intended! Well, the TRUE GRIT remake was officially a remake of the original book. This is also true with our remake. We had the rights to Peckinpah screenplay AND Gordon Williams’ original novel “The Siege of Trencher’s Farm”.

This was important because the intention was to do our own adaptation of the book. There are of course parallels with the Sam Peckinpah film because the same story arc occurs. However, we delved far deeper into the marriage issues of the primary couple, as well as the cultural differences between sophisticated “David Sumner” character and the local townsfolk. We also made a more tropical location in America’s rural south, as well as showed a more respectful vision of the female characters than the original film did. The men in the original are also immediately unlikable, a side of them that we drew out more slowly. So the inevitable comparisons will be made between the two STRAW DOGS. But to be blunt – we made a better movie.

What would you say are the similarities, and differences between your approach and Fielding’s?

There are no similarities. There are only differences. The scores can’t really be compared to each other due to how different the two approaches are.

Could you talk about your main themes?

From reading Rod’s script alone, I conveyed to him that I felt the score should be bold and only concern itself with story arc. So right from the beginning, I present a strong theme over images of a southern rural swamp. I knew that everyone would be completely onboard with a Zydeco or Cajun based score with all the expected instruments. But I went 180% against this, and created a deeply Gothic film noir theme and score that ultimately complemented the rich tones of the cinematography, while also adding significant depth to the characters and their struggles. A “southern’ based score would have been safe, totally accepted, and it would have sucked. Luckily, I work with a strong collaborative director who stood behind this approach, and we held to it to the end. The studio also championed the score, and kept asking for more. We decided all southern rock and other country stylings would be left to the source music you hear on truck radios and in diners.

Could you talk about the emotional progression of your score?

There are specific themes for the primary characters and these themes develop accordingly as the story thickens. Original film scores usually work magic in this area because we are psychologically being given connective tissue, whether we are conscious of it or not. While I took care not to broadcast what was going to happen in story, I also realized that the score needed to keep an under current of discomfort and instability. 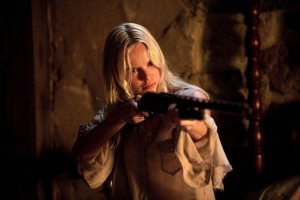 How “heroic” did you want to make the music?

I would say there is no overt “heroic” music, except for perhaps the theme in the very end. Since our main character goes through a huge metamorphosis, that theme plays out in several emotional guises along the way. But even at the end, it’s not specifically “heroic” as it is more cathartic. So in a cool way the main theme is up for grabs. And in the end, the spoils goes the victor.

Do you think there’s a sense of tragic inevitability in your score as well?

I think if I had done that, then it would have given to much away. What the opening statement does is say get ready for a hell of a ride.

Both you and Fielding make impressive use of the horn. What do you think the instrument brings to a film like this?

In my case, it’s the strings that carry the weight. However, brass is also a critical component, as there are certain special articulations that appear like motives throughout the score. At one point, I even used the inspiration of a high school marching band as the lead in an action sequence. 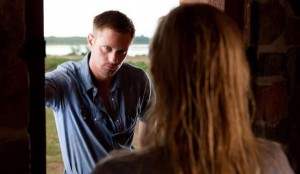 You’ve achieved an unusually lush, and beautiful orchestral sound for a score of this nature? Was that a purposeful contradiction to what you’re watching onscreen?
The striking music for the final invasion goes into Bernard Herrmann territory in the manner of “Cape Fear,” another remake of a classic home invasion film. Did that similarity ever strike you?

It was my idea to temp the score with Bernard Hermann’s music because of its film noir style. As I said, in the beginning I wanted a bold statement over the pastoral swamps and trees. This was akin to CAPE FEAR’s beginning with a simple town crane shot where we hear crashing brass over idyllic surroundings.

Rod’s always been a politically motivated filmmaker. How do you think your music has played into that, especially with the “politics” of violence as presented here?

I would actually say that Rod has had a career arc of bolstering strong women. It was important to him that that was maintained here. However this film musically is a departure from our better-known political projects.

Rod started off as a film critic before becoming a filmmaker. Do you think the repertoire of his knowledge of film history plays into his musical decisions, and tastes?

Rod has taken a path that a lot French film makers have taken, meaning they’re a critic first, and then a filmmaker. Rod has watched a lot of movies. and has reasoned out what works and what doesn’t. His film knowledge is vast, as well as his musical ones. Sometimes we’ll talk about a score from a movie he’s seen as a starting point, but it always comes down to primary emotions. That’s the target of every film and every score; at least it should be.

What do you think makes your partnership with Rod work?

Frankly, I re-earn my stripes and reinvent myself every time with Rod. I love to work hard and solve the puzzle of a film musically. Rod demands that I bring 100% of my artistic abilities into the filmmaking process, and then we go though a series of agreements and disagreements like any fruitful collaboration. I consider myself very fortunate to work at an artistic level that is wanted, and respected by this director. 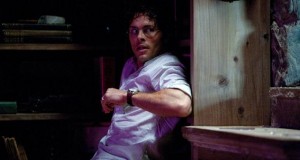 How do you think this remake shows how dark action films, and scoring for them, has evolved since the original STRAW DOGS?

There are of course many ways to skin a cat, and you just have to find the right way for the film, and the right way for yourself. I will say that what I like about my score as compared to the “other” ways it could have been scored is that this score is compositionally rich and solid. There is no reliance on motor rhythms and beats that can often infiltrate present-day dark actioners.

In your own career, have you ever been pushed into making a stand you never thought you’d take?

It is never being pushed as it is standing still for what you feel is the best approach to a film. The mark of a good director, or producer, is the ability to stay open to the contributions that your creative team is giving you. If there are deep fundamental disagreements with a given approach then you need to find another one- but still keeping the integrity of your craft as high as possible. Remember that at the end of the day, your name is going on it.

Do you expect this STRAW DOGS to get the same kind of heated reaction that the original did?

No, meaning at least not for the same reasons. The times were different then. The reaction to violence and rape on screen was still quite new and the reactions were fierce. Today, we are unfortunately not desensitized to that, so the energy that’s behind these violent decisions is what’s driving the film.

STRAW DOGS is your biggest release to date. What’s that opportunity like to finally make your music get heard with a “bang,” as it were?

I of course am thrilled, and hope this brings more interesting projects to me.

What other “untouchable” films, and scores, would you like to get a crack at?