“I’ve always been passionate about culturally-significant movies and music, and tend to gravitate toward edgy, disruptive counter-culture so go with film projects that have something to say about cultural convention and alternatives with potential to advocate for fresh, unique perspectives,” clarifies Randall Poster (THE WOLF OF WALL STREET, BOYHOOD, THE INTERN, THE HANGOVER, SKYFALL, THE AVIATOR, SOMETHING’S GOTTA GIVE, SCHOOL OF ROCK (Grammy-nominated soundtrack), MEET THE PARENTS, VELVET GOLDMINE, RUSHMORE, GUMMO, HBO’s BOARDWALK EMPIRE, and upcoming VINYL) when asked how he works on film music supervision movies.

A Brown University grad, Mr. Poster reflects on igniting his then-nascent music supervision career kindling “when I co-wrote a script and produced a movie (the 1990 Sundance-premiered A MATTER OF DEGREES, that won the CMJ (College Music Journal’s soundtrack of the year) and was the default guy to handle the music. During the process, I realized I was in my element so decided music supervision was what I should be doing.”

A Sundance Awards jury member (World Cinema Dramatic Competition) at this year’s festival and Cinema Cafe panelist, Mr. Poster conveys that he realized early on while making A MATTER OF DEGREES how music supervision falls into the Producer camp of film business responsibilities. 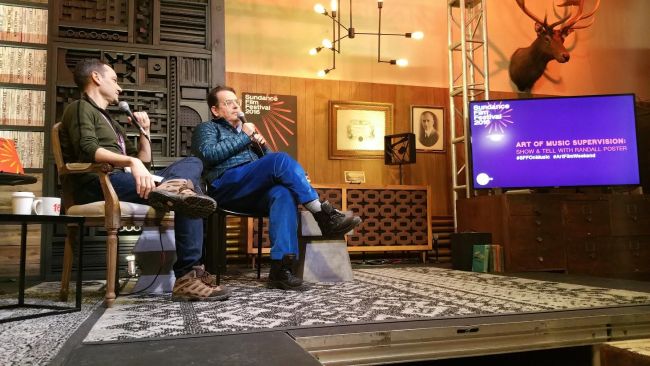 “When I was young, I started to notice how music in movies enhanced making me feel stuff while I was watching. Music in The Beatles’ HARD DAYS NIGHT, THE GODFATHER, etc. made significant impressions on me. I like challenges, and working toward securing music in movies and TV is generally always complicated because of how music publishing, rights, record business performance masters ownership, and performance rights organizations are structured.

There’s also the ‘the human dimension’ factor, as in, handling rights-administrator research and personality quirks. We’re often as much psychologists and personality negotiators as we are musicologist go-to folks.”

To make his point during his Cinema Cafe presentation, he offers film clip show-and-tell of movies he feels influenced his early music-in-film emotional impressions, as well as films he has music supervised or soundtrack-produced.

“When Wes (Anderson) and I started our creative collaboration together on BOTTLE ROCKETS and RUSHMORE, I came to appreciate he has clear ideas for songs and music, chooses many prior to filming, and we overcame our first clearance challenge with Cat Stevens’ (now Yusuf Islam) HERE COMES MY BABY. At the time, he wasn’t licensing music for media projects but we learned he’d founded schools overseas, so since RUSHMORE was set in a school, that’s what we emphasized, it appealed to him, and he agreed to license us the track.”

He expands, “life is often ’round,’ and stuff pans out differently than initially planned. When working with Todd Phillips on VELVET GOLDMINE, we went to (David) Bowie, R.I.P., because the picture was set during that Ziggy (Stardust), glam rock period. But it turned out, David felt the story was just too close to his own actual career course, so opted out and left us without the tracks we needed. Luckily, I work with bands and rock musicians – Brian Ferry was thankfully supportive – and I also knew of Craig Wedren (SCHOOL OF ROCK, LAUREL CANYON, ANCHORMAN, ROGER DODGER) of the rock act SHUDDER TO THINK. Their sound has a similar glam flair, so we just swapped Bowie tracks with Wedren compositions.” 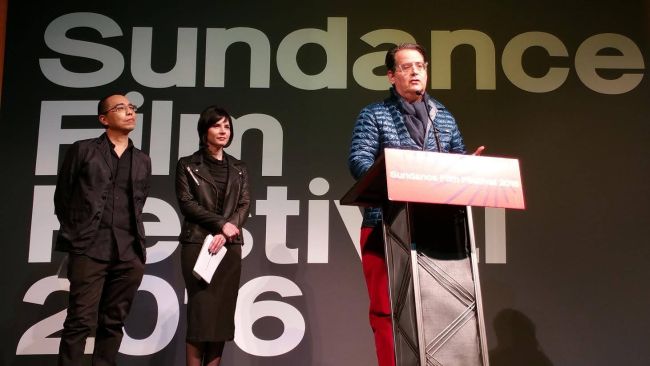 Advancing his ongoing Wes Anderson collaboration on the 2004 picture THE LIFE AQUATIC WITH STEVE ZISSOU, Mr. Poster describes a reversal of sentiment with David Bowie.

“We wanted a Spanish vibe for Mark’s (DEVO’s Mothersbaugh (THE ROYAL TENNENBAUMS, RUSHMORE, LORDS OF DOGTOWN) score but also again, we wanted Bowie material as a theme for Bill’s (Murray) character. I guess this time, Bowie didn’t feel our story was at all related to his real life and he responded to it, so he gave us his blessing to use nine of his songs.

Wes and I would meet on Sundays to review the prior week’s edit assembly progress and actor Seu Jorge did bossa nova versions of the Bowie stuff that worked really well.”

Asked about the various creative processes and preferences of score composers, Mr. Poster offers contrast with, “some composers come in early to the production and want to know what source songs are being considered. Often it’s the composers who come from rock and pop backgrounds like Mothersbaugh, Wedren, etc., and others like Thomas Newman (JARHEAD, SKYFALL, SAVING MR. BANKS) don’t want to be involved with the source tracks process.”

“Sometimes creative perspective conflict and fighting amongst project creative team members can result in improved magic. As I’m getting older, I fight and cry less now than when I started as stuff inevitably sometimes goes sideways. I’ll suggest to a filmmaker that they reconsider her or his decision on a particular track when it feels ‘bigger’ or greater than the material warrants, as in, if it just seems the sequence or scene hasn’t earned a song or track that already has an elevated stature, or is popularly iconic.

I’m excited that the HBO VINYL series (executive produced by Martin Scorsese and Mick Jagger) is epic enough to validate a combination of hot original and classic tracks from my playlists.”