Recently, the Vienna Symphonic Library released their new Vienna Dimension Strings. In this first Insights, I’m looking at DS from a Professional Orchestration perspective and what it lets the arranger/composer do.

HOW THE DIMENSION STRINGS SOUND IS CREATED
OK. This is a non-technical description. Recording one section at a time, each individual player was recorded. So for the released Dimension Strings Violins, you can have 8 individual violinists up to a section of 8. Sections are built by adding players. As players are added, the section sound is built.

Thus, you can set up for individual violinists, by desks (2 players each), by groups (4 players each), or the full section. When we get to divisi, I’ll show you how impressive this is.

As far as the sound quality is concerned, it’s slightly darker, natural, and unprocessed sound, sounding like you’re standing in front of 8 violinists.

ENSEMBLE SIZE
The graphic I created shows the standard orchestral seating with Dimension Strings placed accordingly. The Quartet’s size on completion is 8 8* 6 4 2. Two players are assigned a desk (music stand). Hence, the four x’s. You’ll notice I have 8* for Violins 2. That’s because similar to LASS, the transposition trick is needed to create Violins 2 (which takes about 10 seconds in the Vienna Instrument player). The extended center line is for panning. To the left of the line is stage left. To the right of the line is stage right. Using the Vienna Power Pan (found in the Vienna Instrument, Vienna Ensemble, and the Vienna Suite), you can position the strings any where you want stage left to stage right. 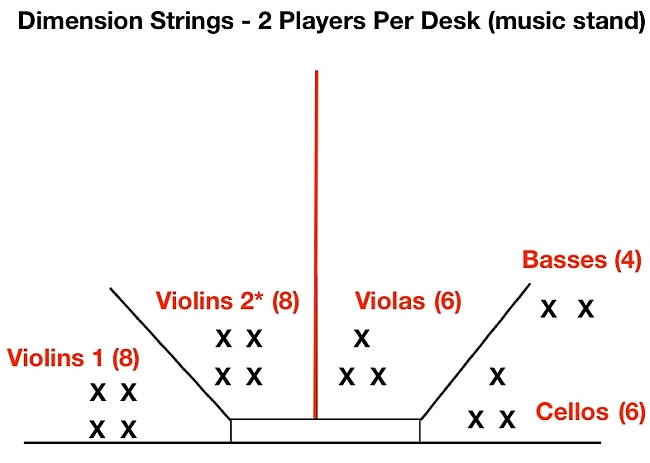 This next diagram shows something you can do with Vienna that really gives the writer a number of options as you go to produce score, and that’s the ability to change seating positions. Here I’ve “seated” the ensemble similar to that of the Berlin Philharmonic which as a result, allows me a stereo positioning of the violins. Because of Vienna’s Power Pan feature, it literally takes only seconds to set up stage positioning, e.g., spatial placement.

So, whether I use DS on its own or with another library, spatial placement is a snap. For finessing two or libs together, Virtual Sound Stage is a very handy and necessary tool when using two or more libs.

Existing Ensemble Size Applications
For those who only want to write for the dramatic size Hollywood film orchestra (even if it’s recorded in Prague!), use the transposition trick and you’ll have it: 16.16.12.12.8. However, as bizarre a statement as this may seem to be, sometimes the dramatic size can be too big. For example, many TV shows and vocal sessions use much smaller string ensembles.

Here’s where Vienna’s Dimension Strings are a real problem solver.

This chart lists by instrumentation some typical ensemble sizes that can be created once all of DS is released (violins are now shipping, cellos expected sometime late spring early summer).

In his book The Score, The Orchestra and The Conductor, conductor Gustav Meier recommends for a Baroque work a string section of 64321 and for Haydn/Mozart, 86542. Hot damn! I can do that with DS. And this is important since many a TV show or made-for-TV pic uses this size string section. Factor in woodwinds in 2s, some brass and percussion, and you have a balanced ensemble ready to go.

The Small Symphony – This is the smallest size string ensemble that Rimsky-Korsakov said should play a full symphonic work. Allows for divisi. Doable with DS.

The Small Studio – Many a small budget film or TV presentation has used this size string section. Also the same sized as used for Mozart and other Baroque works, too. Allows for divisi. Doable with DS.

The Smaller Studio – Again, many a small budget film or TV presentation has used this size string section. Also used by Nelson Riddle for many recording dates. Doable with DS.

Henry Brant – Brant orchestrated for film composer Alex North then left Filmland where he pursued a successful second career as a composer and teacher at the academic level. In his experience, Brant said this was the smallest group of Violins 1 he’d write divisi. Doable with DS.