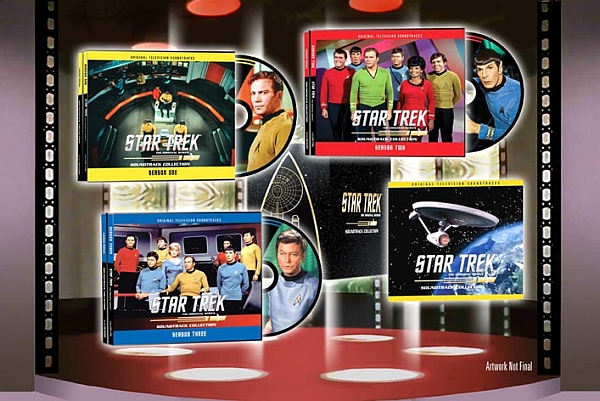 As television came into its own as a force to rival moviegoing in the 1960s, the burgeoning medium made sure to bring a widescreen quality to its music. The ongoing weekly sagas of frontier towns, Cold War spies and crew-cut cops were made all the bigger with boisterous melody, an approach made all the more creative by their music departments’ limited budgets. From the shagadelic jazz of superheroes to the snarling war music of rat patrols, the decade yielded any number of stylistically iconic themes and scores for the likes of “Mission Impossible,” “Voyage to the Bottom of the Sea” “The Wild Wild West” and “The Man From UNCLE.”

While many of these soundtracks remain as time capsules for a certain generation, only one show would be forward thinking enough to branch out to become an ongoing, worldwide phenomena that encompassed every medium of entertainment. This “’Wagon Train’ to the stars was propelled by music that captured heroically orchestral humanity, as thrust into the alien eeriness of space- the show’s call to adventure signaled over three seasons by Alexander Courage’s theme for twinkling percussion, bold, brassy orchestra and a siren voice. Yet as the franchise progressed from stand-alone stories to create an intermingled universe of characters in TV and film spin-offs good and bad, the music of its small-screen variations became far less distinctive for the most part, gliding along on amorphous pseudo-melodies. It was further proof to fans like myself that, in the end, nothing beat the original Enterprise crew when it came to character, both in the form of its readily identifiable officers or the music that spoke for their distinctive personalities and eternally re-watched adventures- the work of seven composers forever fused into pop hive memory as the music of Classic Trek. 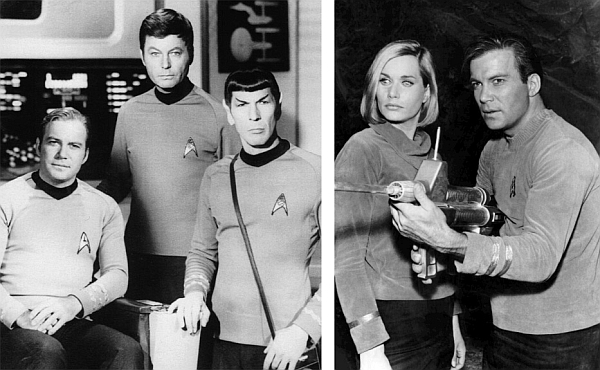 Now, 45 years and change since “Star Trek’s” legendary run from 1966 to 68, La La Land records celebrates their 10th anniversary with a 15-disc collector’s set that offers just about every note of the 17 hours of music recorded for it. However, “Star Trek: The Original Series Soundtrack Collection” doesn’t just provide bliss for the hardcore Trekkies who inhabit their parents’ basements, but also proves to be just as enjoyable for fans of an unequalled golden era when TV music strove to show it had the stuff of its big screen competitors. This “Collection” is a passion project that many people have literally been waiting most of their lives for. And they’ll likely feel young again as one immediately recognizable cue unspools after the other, returning them to a gee-whiz yesteryear of rubber-suited aliens, space vixens and supermen with delusions of godhood. It’s music that’s interchangeable in the mind’s eye, a testament as to just how well original episode scores were tracked throughout the series, or intermingled with library cues, all blended (though sometimes less than seamlessly) into an ongoing, brazenly melodic storytelling saga that most movies could only dream of.

As properly sorted out and explained here, the first-ever CD package to offer the music of an entire series in one fell swoop is everything fans have hoped for since Classic Trek’s scores began arriving piecemeal a few decades ago, as spread over various labels. Specifically thanks to GNP / Crescendo, La La Land has been able to perform a sonic spit-shine on the aural Enterprise that’s equivalent to the series’ CGI-enhanced syndicated makeover in 2006, sans new musical effects of course. Alexander Courage and Fred Steiner’s strongly thematic work laid the DNA of the “Trek” sound to come as scores like “The Cage,” “Where No Man Has Gone Before” and “Charlie X” balanced brass-heavy orchestrations and spectral electronics, achieving a sense of epic adventure in the warp climax of “The Naked Time” or propulsive, whirling excitement for “The Corbomite Maneuver’s” space chase. Many “Trek” scores afterward would necessarily incorporate Courage and Steiner’s themes into their own work,
as well as the “character” sounds like the guitar that Gerald Fried so memorably used for Spock’s mating blood fever in Season 2’s “Amok Time” (an episode that featured the show’s most famed, and oft-satirized gladiatorial battle music).

While everyone can point to “Trek’s” iconic motifs that would often serve like explanation points to Kirk getting gobsmacked with a commercial break-ready predicament, the set reveals the astonishing amount of variety its composers provided. Fried offered diabolically fun Halloween music (“Catspaw”), a poetic love theme amidst an Irish beat-down (“Shore Leave”) and the tragic, American Indian-accented romance for Kirk going native in “The Paradise Syndrome.” Sol Kaplan had a thing for shrill, brassy evil, whether it was contrasting the snarling Ying of an evil Captain Kirk to his counterpart’s Emo-violin in “The Enemy Within,” or pushing a trumpet to its nerve-blasting extremes to convey the relentless “Doomsday Machine.” George Dunning proved to be the series go-to guy for relationships, especially when it involved the co-mingling of heartfelt string humanity with acoustic E.T. effects in “Metamorphosis” and “The Empath.” A particular treat is hearing the “Trek” composers less frequently used, from the Shakespearean tragedy that Joseph Mullendore gave to Kodos the Executioner in “Conscience of the King,” or the dark, Western-style march to a surreal O.K. Corral that a pre “Wild Bunch” Jerry Fielding provided for “Specter of the Gun,” while also showing he could be outrightly hilarious for the Scottish space station brawl of “The Trouble With Tribbles.”

Even when an episode would mostly be comprised of tracked music, a composer could make a strong impression with a relatively brief score. George Dunning provided a memorable Nazi march for “Patterns of Force.” Fred Steiner incorporated the 30s standard “Goodnight Sweetheart” into “City On the Edge of Forever,” while turning “The Star-Spangled Banner” on its barbaric head for “The Omega Glory.” Great bits, pieces and pure gonzo stuff abound in the “Collection” as well, whether it’s Trelane’s harpsichord for “The Squire of Gothos” or Charles Napier singing space-hippy ditties in “The Apple,” one of the nuttier offerings that have come with the set’s first-ever release of any of the music from Season 3.

This is just hitting on the top of a very large iceberg for want of a better metaphor when it comes to this enormity of “Trek” music. But as opposed to the slog that even the best musical odysseys can make a one feel like they’re taking, there’s a sense or real delight, and wonder that makes the listen feel like a journey of discovery. The imagination on hand is indeed boundless, making grabbing the next CD a thing of joy rather than duty. For as much as a geek fest that this “Trek” box could have become (not that it isn’t one), La La’s rabidly-awaited release is a lesson in being clean and concise. Lukas Kendall, who’s been involved in what seems to have been every release of “Trek” music for the big or small screen, has done another yeoman job of captaining the ship in his most important mission yet. Beyond producing the album alongside Neil S. Bulk, “Star Trek” music authority Jeff Bond’s entertainingly informative liner notes start with an all-inclusive booklet, which then splits off into another three to break down every season of original episodic and library music. Complementing his excellent interweaving of composer interviews new and old is Joe Sikoryak’s graphic design, smartly done in the fashion of show’s enticingly straight-ahead (and now retro) visual futurism, as well as the color-coding of the remastered DVD releases.

As important to musical fandom as any complete assemblage of Beatles or Pink Floyd albums, “Star Trek: The Original Series Soundtrack Collection” soars on the power of not only pop consciousness, but the excitement of hearing artists at the height of their endeavor, in this case giving their unabashedly melodic all to a five-year mission that would change the course of the future itself. Though technology their work helped inspire is advancing at the same pace that strong musical voices seem to be regressing, the power of Classic Trek’s music remains undiminished, especially in its full, spectacularly restored glory that can stand proudly as a major achievement in soundtrack releases- be it for film, or TV shows with sci-fi celluloid aspirations.