(Click on any image to purchase The Amazing Spider-Man Soundtrack)

Few movies set off the spider-sense like thoroughly unnecessary, or ill-funded pictures that have been made to cling onto a franchise, a la the dreadful Roger Corman “Fantastic Four” movie that’s thankfully never seen the light of day beyond bootleg VHS sellers at comic conventions. But even more problematic is when a huge-budgeted saga you would’ve liked to have seen continue with the original players (even if it had a lackluster last chapter) has broken down because of script issues and contract negotiations. With this being said, for a movie that has no real right to exist if those calamities didn’t happen, but had to go on anyways, “The Amazing Spider-Man” is surprisingly, and truly amazing. Where the first two terrific Sam Raimi-Spidey pictures were more “comic book” in nature, “500 Days of Summer” director Marc Webb has been brought in to ground the saga with a way less expensive, but equally talented cast, with a sensibility that’s far more teen-appeal indie than pop color spandex. Even Aunt May doesn’t have that many grey hairs in this rebooted, though thankfully still faithful take on Stan Lee and Steve Ditko’s iconic material. 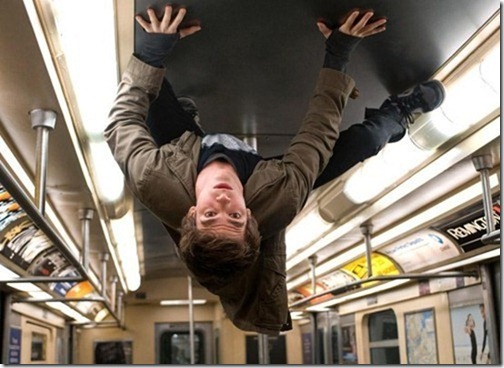 With Webb’s youthquake approach, it’s almost surprising that he’d choose to fill the musical shoes first worn by Danny Elfman (an element that was arguably the hippest thing about Raimi’s first two movies) with the positively old-school sound of James Horner, one of film music’s answers to Uncle Ben by this point. However, if you were expecting to hear the glorious, soaring symphonic strains of “The Rocketeer” attached to Spider-Man, Horner has a surprise for you. For just as Patrick Doyle successfully re-invented his recognizable symphonic style with his first Marvel score to “Thor,” Horner’s debut with the company’s cinematic branch likewise impresses with just how far out it goes out to stay fresh and relevant for the multiplex. And like “The Amazing Spider-Man,” Horner finds fresh 3-D dimensions in a score that makes the welcomely familiar even fresher.

However, James Horner never started out as the musical equivalent of the original Spider Man #1 to begin with. Impressing Hollywood way back when as a major composer with the nautically flying likes of “Star Trek II” and “Cocoon,” as well as the hip R & B and Calypso action scores to “48 Hours” and “Commando,” Horner has done a decades-long hat trick of staying relevant in over a hundred scores from “Aliens” to “Apocalypto” and “Avatar,” never afraid to go for the latest electronics, samples and rhythmic devices that have sunk so many worthy compatriots who couldn’t keep up with the times. And now when a whole school of beat-heavy composers threaten to put the final “Thwack!” on composers with Horner’s determinedly melodic style, he’s literally literally comes out swinging with a brash score, yet one that still identifiably carries that popular “Horner sound.” 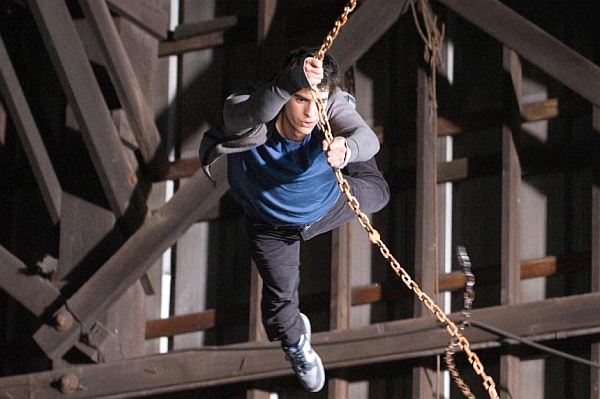 Right off the bat with “Main Title- Young Peter,” it’s obvious that Horner is off on a tangent that’s perhaps even crazier than the dynamic theme that Elfman gave to Spidey, while not being as topsy-turvily complex in its orchestration. Horner’s brass signature is certainly apparent, but the pattering electronic percussion is determinedly of-the-moment, while the yodeling voices are just plain odd in a smile-inducing, WTF way- much like Elfman’s Arabic vocals that made his “Hulk” the most oddball Marvel score (and tentpole movie) to date. Horner’s approach certainly doesn’t point and yell “Spider-Man!” to our ears, and it’s all the more interesting for it. But rest assured, there’s a method to the seeming madness, especially as this reboot reveals itself as the most emotionally longing take on the material yet, from Peter Parker yearning for his lost parents to his far less tentative relationship with Gwen Stacey. 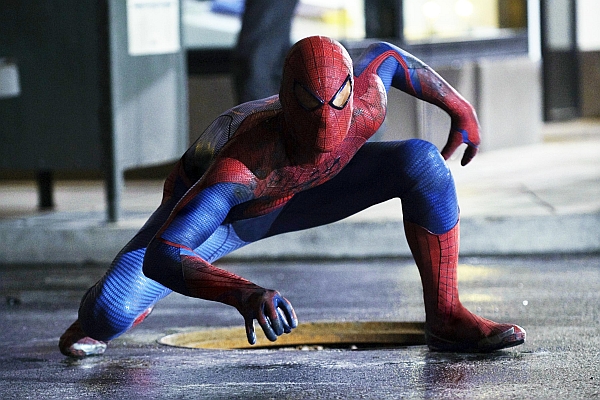 With Spidey not showing up until seemingly an hour in as all of that origin stuff is gotten out of the way, Horner dexterously re-jigs the cue order for maximum listening impact. Hence, we get the score’s full-on appearance of our hero about five minutes in, the ghostly female chorus of many a Horner fantasy score leading to a bit of Elfman-worthy orchestral craziness for the ersatz training montage of “Becoming Spider-Man,” all before a trumpeting lick straight out of Horner’s “The Rocketeer” lands the wall crawler on a skyscraper window. It’s a wonderful passing of the torch from one nostalgically symphonic superhero score to a style that’s significantly hipper, even if it’s still playing with many familiar musical toys. But like this wacky, whimsical take on Peter discovering his powers, Horner doesn’t have assured slickness here. It’s an effort to experiment with his newfound musical “powers” that gives his Spidey-sound likeable uncertainty. And that’s just right for a kid getting used to his suit, slamming into buildings as much as he swings past them with ease.

“Spider-Man” is full of endearing musical eccentricity, from finger snaps and oompa Americana brass having Peter make a monkey out of bullying Flash Thompson while “Playing Basketball.” “Rumble in the Subway.” Taiko drums and howling male voices conjure far more of a samurai fight than “Ben’s Death,” as interjected by Horner’s telltale and impactful brass gestures. But this kind of ethic approach is eerily apropos in “Making A Silk Trap,” as a ram’s horn and voices turn Spidey’s luring of The Lizard in a storm drain into a frighteningly suspenseful endeavor, making us truly dread what’s going to crawl up his web strands. Piano percussion, neo-futuristic synths and magical voices make for sweetly loopy “Secrets,” an approach that recalls the mad scientist of Horner’s Oscar-nominated “A Beautiful Mind,” and does similar wonders for this far more stable teen science whiz. 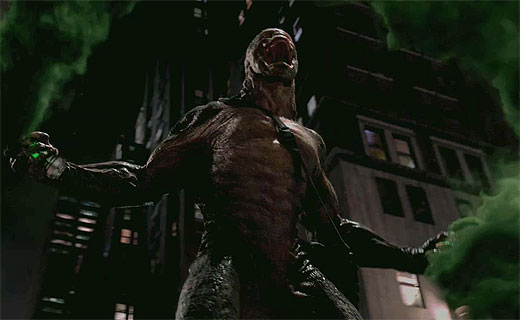 The wait might be longer here for the major action sequences than in most movies of this type, but “The Amazing Spider-Man” delivers the goods, first off with the great rampaging benefit of Horner’s powerhouse brass section in “The Bridge,” his players ranging between crashing cacophony and nobility. While this seems at first to be a more straight-up approach for Horner, “Spider-Man” once again throws an interesting, almost surreal monkey wrench into the expected with a child’s chorus. It practically la la’s a lullabye for a particularly touching scene of Spidey giving his mask to a kid in order to save him (one of the many, many times that Peter will doff his identity protection). But it’s full monster-mash time for “Lizard At School!” as guttural electronics conjuring a smashing, rampaging beast as pitted against Spidey’s symphonic bravery.

As he’s stirringly displayed in such scores as “Apollo 13” and “The Rocketeer,” few composers are able to capture the joyful sensation of flight like Horner, a talent that makes him particularly well suited to “The Amazing Spider-Man,” especially when his music giddily soaring orchestra swings away from the hapless cops in “Metamorphosis.” True jeopardy effectively joins with Horner’s web-slinging and action chops for the note-filled climax where the Lizard takes Manhattan. And in the same way he handled every hero from Braveheart to Jack Ryan, Horner makes sure to track our protagonist through the action music onslaught, letting us know the huge emotional stakes that are at play. In “Saving New York,” the full majesty of the vocal heroism really pays off for one of those great hero-theme moments that makes you feel like an awestruck, comic-reading kid again, while the breathless, crashing suspense atop “Oscorp Tower” has a clean, melodic intent that brings the mad science house down in ever-escalating style. 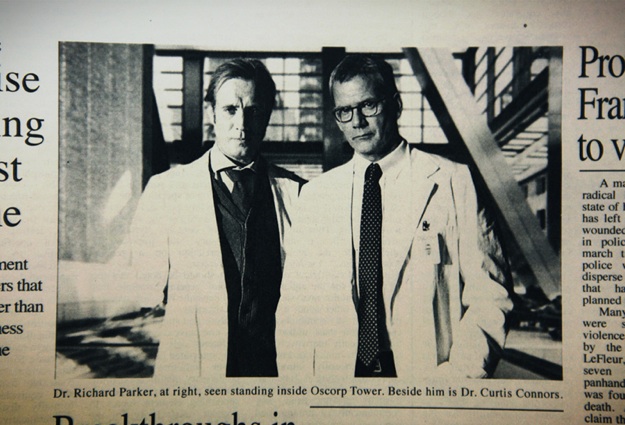 A master of love themes, Horner’s music for Peter and Gwen has a real, affecting tenderness to it, from the lovely simplicity of a piano in “The Equation” to the sweet, gossamer strings and woodwinds that cast the couple’s spell in a “Rooftop Kiss.” For a movie about superheroes, one of director Marc Webb’s greatest powers here is cutting to the characters’ vulnerability, making for some truly handkerchief-worthy scenes. Even with the villain vanquished, “Spider-Man” takes its good darn time wrapping up the story on a seemingly downer note. It’s with “I Can’t See You Anymore” that the love theme’s poignant strings and solo piano beautifully convey the tragic nature of Peter’s spider powers with impactful subtlety, conveying a hero dedicated to saving everyone around him while unable to hold onto the ones he loves. But far from a downer, and with far less psychological storm clouds that finished off Raimi’s first “Spider-Man,” Horner’s “Promises” brings in a thematic sense of hope with just as much subtlety, before going to that other wonderful superhero cliché of the last shot with our crusader in action, with his adventures of course be continued. Horner closes on a well-earned sense of elation that not only trumpets the glory of Spider-Man, but of a composer infused with renewed vitality- one gained from his own funky experiments and keen musical intellect- all gained, and well-earned without benefit of a radioactive spider bite. 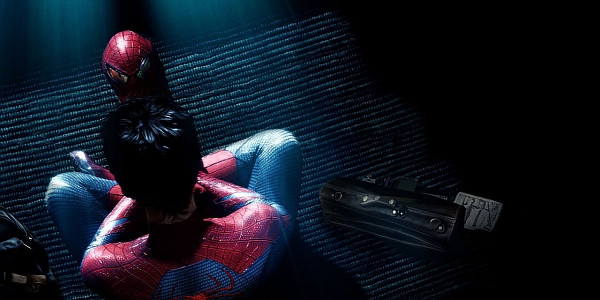