With all the major DAWS for the Mac (Logic Pro, Cubase, Digital Performer, etc.) it is possible to host a QuickTime Movie inside the DAW and sync to it and it works just fine. Of course, the movie is not actually running in the DAW, it is running in QuickTime. It does, however, tax the computer somewhat and if the QT movie has been compressed, the app can bog down a little in a project where you are running a lot of virtual instruments and massive sample libraries. So many users prefer to run the movie on a second computer they may have lying around or buy an inexpensive one to do so.

So then the question is, which software to use? People who have dedicated slave computers for ProTools may host it in that or another app but that incurs expense and a learning curve that may be an undesirable choice for you, if you do not already have the other app.

There have been several apps for the PC, including ChainGang for this task, so if you have a slave PC, that may be a way to go for you. http://www.humatic.de/htools/chaingang.htm

But there are many Mac users who simply do not want to enter the world of Windows and already have a second Mac.

In my experience, the application of choice for the “big dogs” for a Macintosh compatible non-linear QuickTime based VTR has been VirtualVTR. I have not used VirtualVTR myself, but by all reports it is a stellar application. http://www.virtualvtr.com

Quite simply, it uses MIDI time code (MTC) for sync and MIDI machine control (MMC) for jogging/shuffling within your DAW. It is relatively simple to set up, very reliable, and very flexible in that it works either with network settings or hardware.

It is also $999 just to buy this app to do these relatively simple tasks! And its big even more powerful brother VirtualVTR Pro, aimed mostly at busy post-production houses, is $1899.

Clearly, there was a need for some more affordable competition. Enter an enterprising, young, brilliant code Yoda named Flo Loferer and his company Non-Lethal Applications. At the urging of and encouragement of former Nine inch Nails member turned film/TV scorer Charlie Clouser, Flo has created Video Slave, which performs all the essential tasks that those of us scoring to QuickTime movies with a DAW need. And happily, he is selling it for $249 literally 1/4 of the price of VirtualVTR. It will run on any Mac with an Intel chip, even the oldest and lowliest machine :)
http://www.non-lethal-applications.com/products/video-slave.html

It can use all the common codecs, including HD, and can receive MIDI sent from the DAW either with a MIDI interface or ethernet network settings. It also has a “fullscreen” mode; allows you to set SMPTE offsets; display visible time code overlays on a QT movie that does not have it; and edit, remove, or add movie time code tracks.

I was actually rather shocked to find out that most of the QT movies I have been scoring to do not in fact have a time code track as you can see here in the movie properties window of QuickTime 7. As I started with scoring films synced to a VCR with time code striped, I just assumed that there was in fact a time code track embedded. Well, when you assume….. (please add your own joke.) 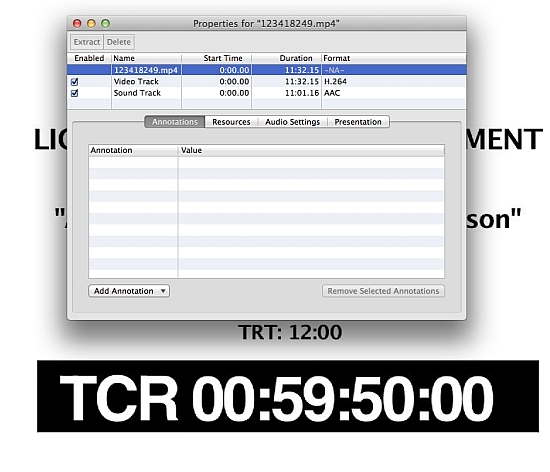 In a program like Logic Pro, it does not need a time code track as all you are doing is matching your SMPTE start time with a specific frame of the movie, but in a standalone app, particularly on a second computer, it is necessary. Fortunately, Video Slave gives you a quick and easy way to add a time code track.

There is a built-in help menu in the app that tells you all you need to know but also on the website, there are pictures and helpful links for your display and MTC/MMC configuration options and how to set them up for your DAW of choice.

You can also run it on the same computer and while the benefits of CPU saving will not be as great, it can still be helpful, as I can for instance, load five reels of a film into Video Slave’s playlist and if I then open a Logic project, I can easily access the specific reel that is correct for the cue, whereas running the movie in Logic Pro, I would have had to save that reel as part of the project.

All this for $249 and it will run on an older Mac that may be presently serving for you as a doorstop :). In my view, purchasing Video Slave is a no-brainer.

For those of us who are addicted to the many wonderful plug-ins on the UAD platform (be warned potential new users, it is the audio equivalent of crack cocaine), UA has finally released 64 bit versions of them for Windows with a Mac beta version promised this month. Goodbye and good riddance to Logic Pro’s 32 Bit Audio Unit Bridge for me. RIP :)

NONSENSE ON THE NET ABOUT LOGIC PRO

Many of you have read an article from an Apple “insider” that Apple’s Pro Apps team has been “decimated.” While not necessarily literally inaccurate, it is leading Logic Pro users to draw some wrong conclusions and panic about its future.

The members of the team who were let go worked in marketing the pro apps. Since Logic Pro is no longer sold in brick and mortar stores like Guitar Center or Sam Ash but instead is sold as a downloadable product from Apple’s App Store, these jobs became expendable. This has nothing to do with the development team for Logic Pro, GarageBand and GarageBand for the iPad. These guys are still on the job so Logic Pro users should not interpret this news as “Logic Pro is going away” as that is simply not the case.