Research Assistance by DaddyO from VI-Control

With the release of Vienna’s new MIRx Reverb Mixing Extensions for about USD$100 street price each for the Vienna Instruments Pro player (v2.0), no one will ever be able to say again that Vienna is hard to mix with. That argument is firmly put to bed once and for all with MIRx, whose release makes the Vienna Special Edition libraries more competitive than ever.

Of course, if you only have the basic Vienna Instruments player, you’ll have to upgrade to Pro, and then get MIRx. But in all, VSL users will find the upgrade worth it given the problem/solution features of MIRx.

SPATIAL PLACEMENT
MIRx gives you three performance venues (which can be bought individually or in a bundle) in which to place the Vienna libraries: the Teldex Scoring Stage in Berlin, the Konzerthaus Grosser Saal in Vienna, and the Konzerthaus Mozartsaal which is also in Vienna.

Spatial placement for each instrument and section, meaning its position stage left to stage right, and stage front to stage rear, has been optimized for each performance venue. Once you’ve loaded a specific Vienna Instrument, it’s automatically placed for you on stage. Below is the stage placement for the Strings. However, other placement settings are available. Double click to bring the picture up to full size. 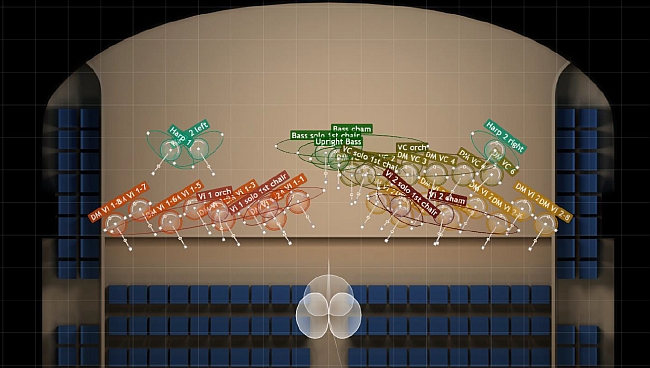 NATURAL VOLUME: THE WAY TO GET VOLUME LEVELS TO BALANCE
MIRx brings over from the full MIR program a feature known as MIRx. Per VSL’s Martin Tichy, “Natural volume means that, e.g., the loudest notes of the bassoon in comparison to the loudest note on the trumpet. No matter which CC you’re using, you get the natural relation of instruments as they’re sitting on stage. Of course you can assign any CC you like, e.g., 1 for velocity crossfade, 11 for expression and 7 for volume, or any other combination. Vienna Instruments PRO lets you assign any CC to any slider.

PROFILES: THE END OF THE TRANSPOSITION TRICK?
Look at the graphic below. Here you see that for the Trumpet in C, there’s also a Trumpet 2 in C and a Trumpet 3 in C. So, if you want to create a section with individual “chairs” for vertical harmony and combine that with the existing Vienna section ensembles, you can. This means that you can now write as you would for live ensembles.

For the violins, there are now sections for Vlns 1 and Vlns 2.

The Trombones and Bass Trombones, I’m informed, each have two profiles. The tenor trombone has profiles 1 and 2, as does the bass trombone. Based on a cue from Tom Cruise’s Oblivion published on Sibelius, a power low brass sound can be built from 2 tenor trombones (now available), four bass trombones (double up in Vienna), and a Cimbasso. With MIRx you can now begin to emulate that sound.

For the flute, French oboe, Bb clarinet, and bassoon, there are also two profiles each. This means that with the addition of MIRx, you can now have a woodwinds in twos section.

With the Teldex Scoring Stage option, VSL is now competing more directly with Orchestral Tools and their Berlin Woodwinds Library which was recorded in Teldex and comes with woodwinds in twos, but recorded by individual players.

MIRx also makes VSL more competitive with other libraries that recorded woodwinds singly, and have no option, other than the transposition trick, for creating woodwinds in twos, which is the standard woodwind section size.

I should also point out that this solves another problem for those owning Dimension Strings and Brass. With MIRx, owners of these two libraries plus either the Special Edition or Woodwinds 1, now have a kind of “Dimension” woodwind section.

Does this, however, mean the end of the transposition trick within the Vienna libraries? Answer: it depends. Said VSL’s Martin Tichy, “Well, sometimes, but not always, depending on the positions, the instruments and the articulations.

FIRST CHAIR STRING SETTINGS
With special programming, VSL has massaged their solo string library, with MIRx, to function as a first chair instrument for the Orchestral Strings and Appassionata Strings. This technique of layering a solo string instrument with a corresponding string sectional sound, has been found to give sampled strings a more lively and natural sound. The graphic below shows Profiles for Violins 1 and 2, Violas, Cellos, and Basses.

BUT HOW DOES IT SOUND?
I haven’t been sent a review copy yet, but Vienna has posted one audio demo, cleverly titled Mirxed Feelings by Markus Zierhofer, which is very impressive. Listen for yourself.

But if you already have a mixing routine in place, then one is compelled to consider the Vienna Suite and FORTI/SERTI (which enables you to add ERs to each Vienna Instrument), and VSS when needing to position other libs. With Vienna Suite, IRs of each venue in MIRx are included in the Vienna Suite, allowing you to place different libs into the “same” hall or scoring stage.

For a non-engineer like myself, it now appears that whatever I want to accomplish in mixing, Vienna has a solution for it.

Make no mistake, there is a learning curve here. And the training video moves at a crisp rate. So plan on watching it several times, taking notes as you go.

Aside from this, MIRx is extraordinary audio innovation, and those who developed it should be publicly lauded.